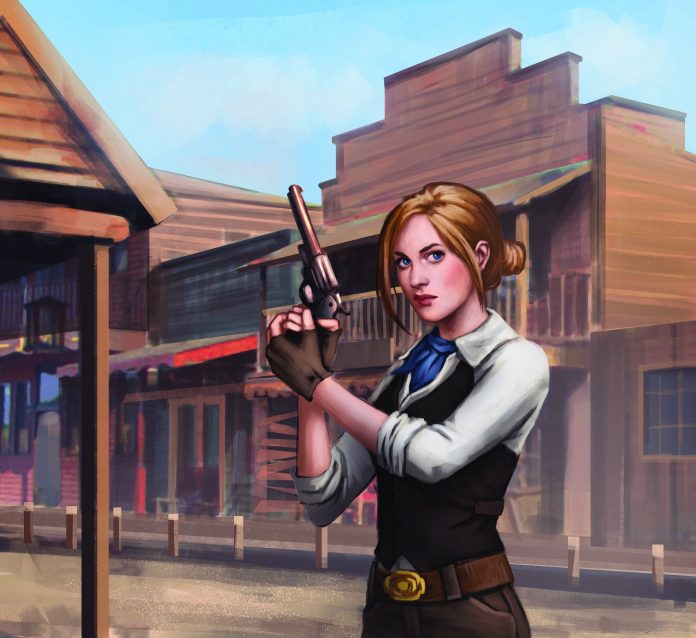 The doors to the Dead Dog erupted as a man was launched out of the tavern and into the street, his already bloodied face crashing into the dust. The doors swung open once more as another man, larger in size and renown, sauntered out after him. He reached out his hand to strike a match against the post before using it to light the cigar that dangled from his teeth.

“Daddy always said if yer gonna cheat, make sure yer better than the one ‘cross the table,” he said as he stepped down onto the dirt. “Bet you’s wishing we were brothers ‘bout now, don’t you, Simpson? Oh well … reckon this is the price you pay for poor upbringin’.” He took a long draw of smoke before reaching down to the hilt of his knife. “I wouldn’t do that if I was you, Seville.” The voice was high, but stern … stern enough to cause the outlaw to turn to meet the steady gaze of Lucy Clover. The young woman walked to position herself in between the two men.

“You made your point, now git back inside.” Marion Seville chuckled briefly. “You can’t be serious. Sheriff ‘round here must be mighty desperate to start deputizin’ kids.” “I’m grown enough to make the likes of you git back inside, now git.” Marion pulled the cigar from his mouth, puffing out a blast of smoke as he walked up to Lucy. He reached out with the same hand and flicked the corner of her badge. “Law’s got no say here, girlie. That man cheated me. He’s mine.” “Then I’ll take him to the sheriff and let him decide what to do with him. But you’re not layin’ another hand on him today.” All traces of amusement melted away from the man’s face, and he leaned down to mere inches from Lucy’s. “You really think yer gonna be the one to stop me, little girl?” The next sound was the unmistakable click of a pistol hammer. Marion’s body tensed up as he felt the barrel prod him in a most uncomfortable place. “My daddy always said if yer gonna be little, make sure yer smarter than the big lunkhead with the knife … now GIT.” Marion ground his teeth in frustration before taking a deep breath and stepping back, away from the girl’s weapon. “Fine,” he huffed, turning and nearly knocking another man over as he stormed back into the saloon. “Ain’t worth gettin’ my boots dirty anyways.”