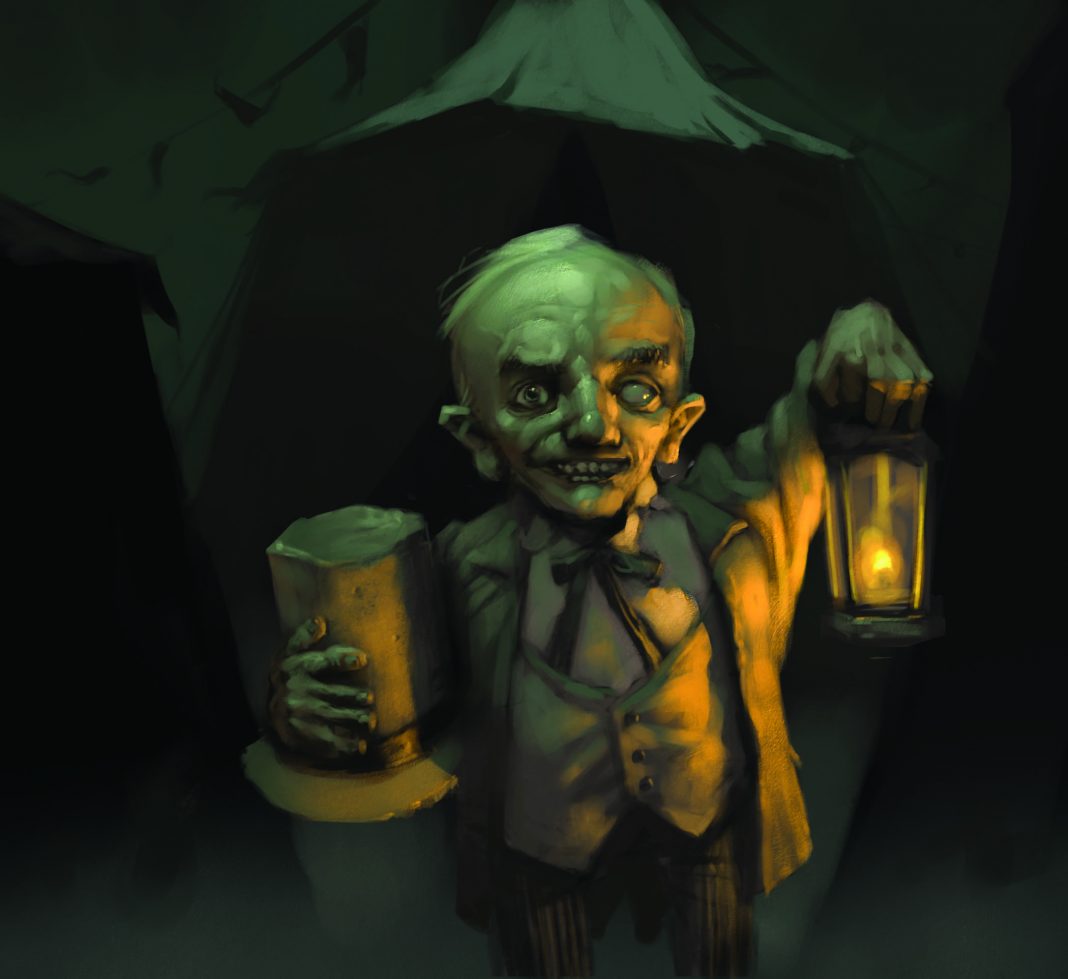 Kevin Wainwright ambled through the town square with the rolling gait of a drunken sailor. Instead of the expected trail of dust clouds, his polished shoes appeared to barely touch the ground, if at all. Kevin noticed a trio of ladies idly chatting outside of Pearly’s. From inside Gomorra’s biggest dance hall, an out of tune piano pounded out a passable version of the Can-Can over the rhythmic click of the dance troupe’s kick steps.

His attempt at a cheerful “Hello Ladies” came out as a rattling cackle that ended in a high-pitched hiss similar to steam escaping a tea-kettle. As he had seen Ivor Hawley do so many times, Kevin doffed his misshapen top hat with a sweeping flourish, except that he spun sideways and barely stopped himself from sprawling in the street. Meanwhile, the ladies returned the greeting with nervous titters and averted gazes as they simultaneously dipped their fringed parasols to further avoid having to look down upon the strange, little man as he stumbled on by past the dance hall.

Actually, at this point, Kevin really was not interested in the ladies. Mr. Hawley had entrusted him, and him alone, to deliver the contents of the envelope tucked inside his waistcoat’s secret pocket. Ivor’s thick red wax signet pressed against Kevin’s shirt and he could almost imagine it burning through to his skin. Turning around, he had to look side to side several times to reassure himself that Ivor Hawley was not there to disapprove of Kevin’s effort. Actually, Kevin sort of wished and hoped that Ivor would appear. Everything always somehow turned out alright in the presence of the Ringmaster.

Just the thought of Ivor Hawley renewed Kevin’s sense of purpose. He resumed his odd walk through town. Trying to recall Ivor’s directions to each building, Kevin slowed and peered from side to side through his one good eye.

“There it is,” he thought to himself as he crossed the street and gave an insistent set of taps upon the thick, wooden door. After a brief wait, Kevin was ushered through a dark antechamber and into the study. Kevin reached into his pocket for the envelope. Even standing on tiptoe, Kevin barely cleared the top of the imposing mahogany desk that separated him from the shadowed figure seated behind the desk. “Mr. Hawley would like to make a contribution to your campaign”, Kevin said in an eager, shrill voice.