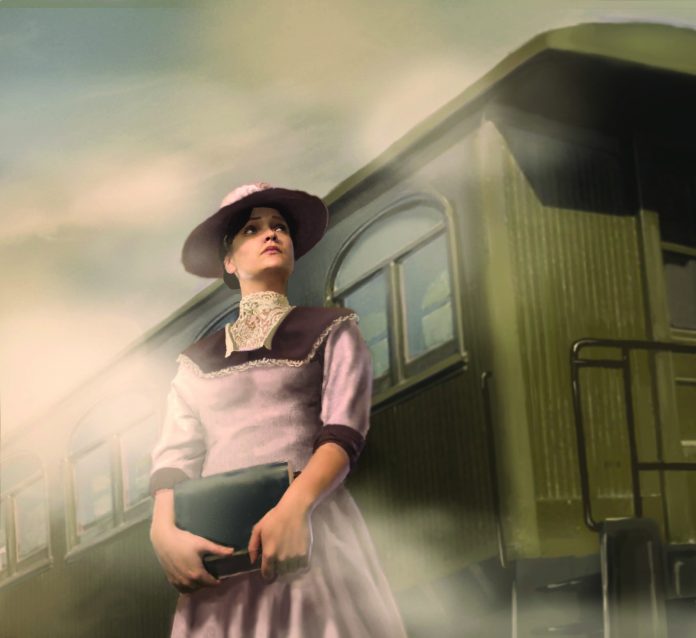 “I HATE geometry! ‘Specially these stupid shapes! Who cares what a six-sided star is called? Let’s go!” With that, Drew leaps off the bench and springs through the schoolhouse’s open window. Landing in a perfect tuck and roll, he races around back.

“Woooo yeah!” Drew’s friend, Jack, leaps out the opposite window. Lacking his buddy’s easy grace, Jack’s left boot catches on the sill and he lands with a dusty thud. Unfazed, he bounces up and runs to join Drew at the rear of the schoolhouse.

“Ty,” as everyone calls him, dashes out the door to join his friends.

Drew nimbly eases himself through the manzanita thicket, but his younger friend gets stuck amongst the entwined branches. Ty pushes from behind, and the trio finds themselves at the lip of an abandoned mine shaft. Drew and Jack shinny down the rickety ladder. At the bottom, Jack catches Ty as he slips halfway down the ladder.

“Hold hands and single file,” Drew orders. The others comply, Ty in the middle, and Jack bringing up the caboose. Having been this way before, Drew eschews lighting a torch, and instead deftly feels his way through the the passage.

Olivia Jenks turns from putting the outlines of geometric shapes on the crude slate slab at the front of the room. “Not again,” she mutters to herself.

Only last week, Clementine Lepp was grousing about the kids wreaking havoc as they raced through her Killer Bunnies Casino. “Just like lil’ jackelopes,” was the indignant bartender’s exasperated summary. Word spreads quickly in a place as small as Gomorra, thus dubbing the boys the sobriquet of the Jackelope Gang.

Back east, the truant officer would round up her wayward charges. Out here in Gomorra, Olivia has to collar them herself. Turning to her remaining students, she points to the slate, “Copy these shapes.” With that, she hitches up her skirt and sets off at a run towards the center of town.

Drew stops at a bend, the other two bumping and sending them all sprawling. Dusting himself off, Drew stands underneath dimly backlit holes in the shaft’s ceiling. “Ty, boost time!” he whispers to his companions.Locking hands, Drew and Jack lift Ty upwards. Ty’s small six year old frame belies a wiry strength and the boy deftly presses upward to lift the crude trap door up and outwards. A renewed boost finds him shinnying onto the floor of the Killer Bunnies Casino storehouse. Jack boosts Drew, and then Drew and Ty strain together pulling Jack up to join them.

A quick peek around the corner finds most of the gamblers bucking the tiger at the ubiquitous faro tables. By the corner, the clatter of ivory beads accompanies the sing-song cadence of Mandarin as a croupier clears away fan tan markers.

Waiting until Clementine Lepp turns to pour another draught, the youthful trio half crawls and half bear-walks across the gritty sawdust floor. Unfortunately, a skinny man with an Adam’s apple protruding above his red bandana chooses this moment to attend to business at the bar counter, making it only part way before stumbling over Jack.

“What in tarnation,” he looks wildly around before crashing backwards into the bar.

Startled, Clementine whirls around and sees the children scurrying around the fallen patron. Quickly grabbing a broom, she leans over the bar and commences indiscriminately smacking the dog pile of kids and patron alike. “Scram, ya darn jackelopes, I run a reputable business here!”

The fallen man flails around, “Why, I ought to tan yer dang fool hides jest fer funsies,” he sputters while unsuccessfully trying to grab any or all of the fleeing children.

“Time for y’all kids to be going, and time for another round,” booms a heavy-set man at the bar.

“Bye, Miss Jenks,” they cheerfully shout as they flee out towards the town square as Olivia breathlessly enters the casino.

Tommy Harden turns just as the bandana-ed man lurches up and barrels headlong into him. Using his girth to pin the man back against the bar, Harden roars, “Pick on someone your own size.”

“Sez who?” the man truculently replies.

“Sez this tin star you slitherin’ good fer nothin’ Sloaner!” Harden uses his thumb and thrusts the hexagram outwards from his shirt as he barks out the callout, “You. Me. Right here and right now!”