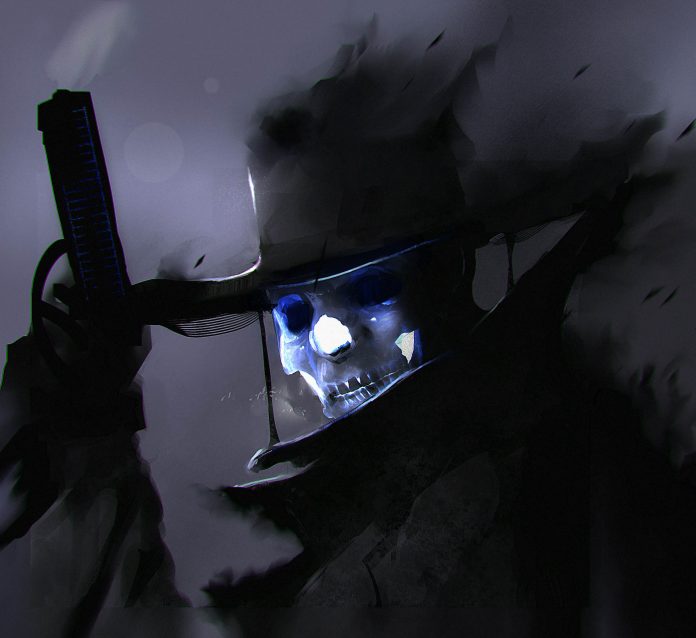 “I still hear hoof-beats behind us,” Kevin Wainwright lifted his ear from the ground and looked back up towards the coach as he updated Ringmaster Ivor Hawley.

Ivor pensively rested his face on steepled hands that cradled his ornate walking stick as he looked down upon his assistant. “That must be the same gentleman that’s been following us since Tombstone. It’s time to make a play. Let him come to us.”

There was only the rush of wind until he heard the sound of approaching hooves half an hour later. A lone horseman raced past, wheeled and reared his horse up, before he came to a stop fifty paces in front of Ivor’s lead coach. “Yield in the name of the Confederacy!” proclaimed the rider. With this, he drew and leveled his six-shooters at the coach.

“And who in tarnation are you?” inquired the coachman.

“Joseph Willerston of the Texas Rangers. I’d have words with your master.”

“Ringmaster Hawley answers to no one,” blustered the coachman.

“It’s all right,” Ivor responded from inside the coach.

“Step outside and away from the carriage. Hands where I can see ‘em,” barked the ranger.

Ivor Hawley slowly opened the door and gracefully stepped down as he complied with the order. Kevin Wainwright stumbled and fell as he followed his master. The diminutive assistant assumed his master’s straight stance and despite lacking a walking stick, also mimicked Ivor’s outwardly splayed arms.

A sickle moon cast pale light upon the desert hardpan while the lingering humidity of the afternoon’s monsoon rains heated the late summer air like a sauna. Sheet lightning crackled across the nearby ridges. Unperturbed by the harsh surroundings, Ivor’s disdainful expression indicated that he clearly could care less about the twin artillery pieces aimed squarely at his chest.

After a drawn out pause, the ranger bellowed over the rumbling thunder. “Prepare your freaks for inspection! No funny business, you don’t stand a ghost of a chance against me!”

As the racing clouds began to blanket the slivered moon, Ivor quickly flicked in his right wrist, giving his stick a deft flourish. Seeing the motion, the ranger quickly fired an errant shot at the cane. Ivor’s smirk gave way to a full-toothed grin as the moon was hidden completely.

Just then, the clouds abandoned the moon, and the clearing was once again dimly illuminated. Now however, standing between Ivor and the ranger was a man-like figure even taller than Ivor. All that could be clearly seen of this new arrival was a pale, indeed completely white, face. Before the startled ranger could react, there was a single burst of orange flame, followed by a roar as the bullet sped forth to deliver its final and fatal message to the ranger. Startled, the horse gave a panicked neigh as it threw its dead rider and lit a shuck back the way it came.

Ivor and Kevin slowly and quietly re-entered the coach.

“Were you ever worried, Master Ivor?” Kevin wheezed as he suddenly broke the silence.

“Not for a moment, my dear lad,” Ivor winked. “There is always at least a ghost of a chance.” As they passed the slain lawman, Ivor paused to say, “Ah, good sir, why waste words when a gun speaks so eloquently?”