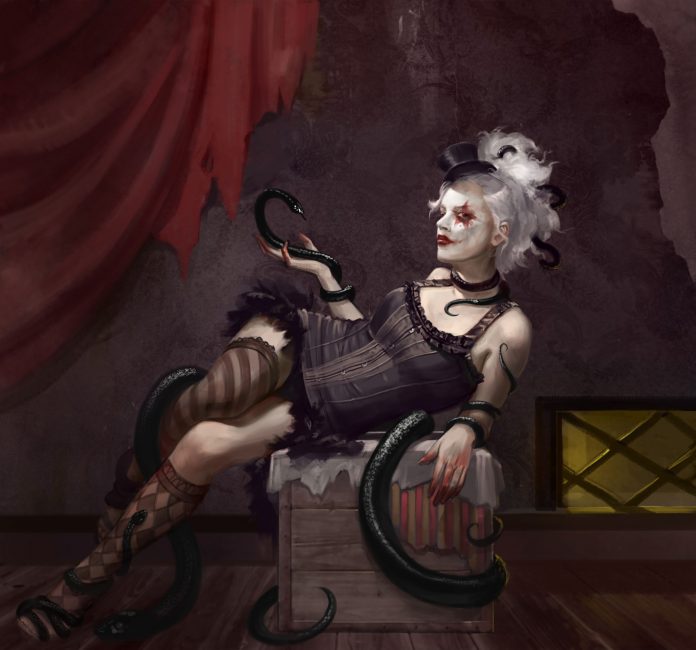 Henry Lunsmith was livid. “Good riddance, Avie Cline, you two-timin’ hussy!” Indeed, he could not bring himself to use his surname, bestowed lovingly a year ago upon his bride.

Avie lifted the oilskin covering the stagecoach’s otherwise open window. Thrusting her head outside, she retorted, “Not to mention the three you never knew about!” Even better than cheating on Henry was his gladly paying to banish her far away from the fork in the roads that was Burns, Oregon.

She ducked back inside as the driver cracked the whip, gee-hawing the team into motion. As the stage raced across the basalt-strewn badlands, Avie’s thoughts drifted westward. What wonders lay beyond the snow-capped Cascades? Portland? Perhaps a steamer or train to Shan Fan?

A low, steady rumbling shook the stagecoach while the horses neighed in a frenzy. Before Avie could react, a geyser of earth and rock spewed upwards, pelting the stage with debris. Immediately, the huge, tentacled maw of a Mojave rattler exploded out of the opening and pounced upon the closest horse. As the enormous worm continued to breach the hole, it glanced the side of the stagecoach. Separated from the harness traces, the coach rolled before settling on its side.

Avie tried to lift herself up and screamed from the pain of a broken arm. With some effort from her bruised, but otherwise undamaged, other arm, Avie extricated herself from the ruined stagecoach. As she peered over the edge of the upturned stage, Avie teetered and lost her balance. As she fell, a jagged piece of basalt gashed her leg, sending blood coursing down her stocking.

After the monster’s whirlwind of carnage, the moonless night was once again quiet. A whirring buzz did not provide sufficient warning as Avie felt twin stabs into her gashed leg. Rattlesnakes, a whole den of them! Several more bites came in quick succession and Avie’s limbs swelled painfully from the venom.

Avie’s eyes opened and squinted against the sunlight. Something slithered across her body and continued up her arm. Moving the arm summoned the pain anew and reminded Avie of how she ended up in this ravine to begin with. Startled, the snake gave a quick buzz of its tail, but otherwise made no attempt to strike. Out of the corner of her eye, Avie glimpsed yet another rattlesnake languidly flicking its tongue across her cheek. Exhausted, she shivered as at least another dozen serpents continuously weaved in and out of her tattered dress and blouse.
* * *

“It is close, very close. I sense it is new and just right for us,” Ivor Hawley spoke as much to himself as to Kevin Wainwright. Ivor leaned forward out the carriage window and instructed his coachman, “Detour over towards that outcrop.”

The ornate circus carriage was nevertheless sturdy enough to handle the jostling of the mixed rocks and sagebrush that lay between the wagon trail and the indicated rock formation. After a few minutes, Ivor once again hailed his coachman, this time to pull to a stop.

Kevin bounded out and after a brief search called back to his master, “Mr. Hawley sir,” he wheezed, “it’s a woman.”

Was that the sound of an approaching calliope? Avie’s heart raced, and the vipers struck up an angry chorus. Eventually, the lead coach for the caravan stopped beside the wrecked stagecoach. Avie’s vision blurred as if seeing through eyes that were no longer her own. A little man in a top hat careened towards her, his lantern bouncing in a crazy arc.

A much taller man had come up behind the diminutive lantern bearer. He bent down to peer over his assistant’s shoulder. Undisturbed by the snakes’ gape-jawed hisses, he bowed, “You are most very welcome to accompany my traveling troupe.”

“But, but, who are you,” Avie stammered in a voice she scarcely recognized as her own. “And why should I come with you?”

“I am Ivor Hawley, Ringmaster of the Fourth Ring. You are, of course, free to remain here as you please, “ Ivor gave a dismissive wave of the rocky terrain that surrounded Avie.

Avie surveyed her bleak surroundings as she lurched to her feet. She gazed eastward towards Burns and turned back to Ivor. “Can’t be any worse than Burns or this pile of rocks,” Avie rasped as she stumbled towards Ivor’s extended hand.

With one smooth motion, Ivor caught Avie’s fall and twirled her around and into the waiting carriage before entering himself. Ivor exhorted his troupe’s newest member, “Shed your past! Embrace the power that lives within and sustains you!”

As the troupe resumed its journey, Avie turned and asked Ivor, “But where are we going?”