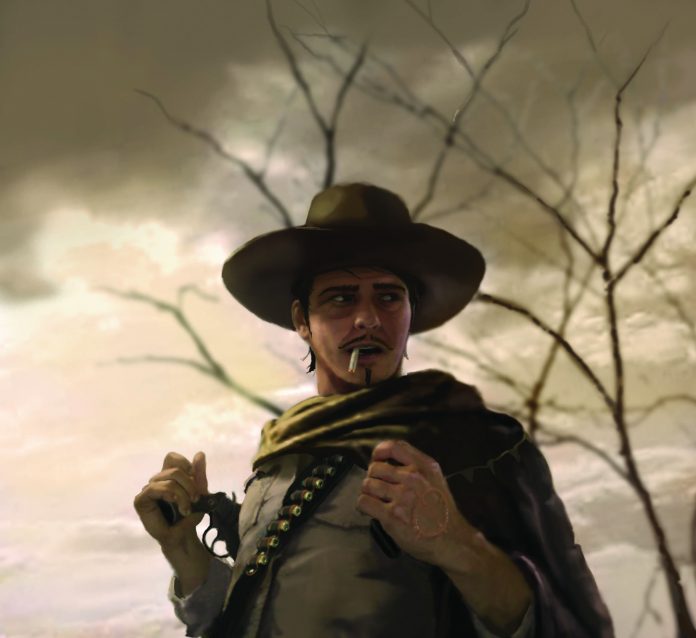 “Come now, corazon,” the outlaw said passionately as he looked up to stare, seemingly, entranced as the young woman’s hands lingered deftly across the guitar strings, causing music to trail off into the night. “It is a crime to allow such beautiful music to go by without a dance.”

The young woman flipped her long, dark curls back to one side and smiled as she considered him. “My father would not approve.”

“Scoundrel! I’ll deal with him myself!” Pancho turned and started to march to the front door of the mansion before she stopped him.

“Wait,” she said, giggling. She instead motioned him to a lattice that climbed up the side of the building to her balcony.

Pancho stopped at the bottom to admire and smell the large, white yucca flower nearby before smiling, picking a single bloom, placing it in his teeth, and boldly scaling the wall and hopping down next to her. He gently took the blossom and placed it in her hair before leaning in again to smell it, brushing by her ear as he did. She smiled softly as her cheek grew flush.

Suddenly, the door to her room flung open as a half dozen men, looking like they just came from the fields, poured through with pistols poised. They were followed by an older Spanish gentleman, dressed in a brass-buttoned waist coat and shimmering black leather boots with nothing but fury painted across his face.

“I knew it!” he bristled, in an accent as thick as his  mustache. “A bandito! Trying to steal my only daughter! I saw your horse tied up behind the barn and I knew that a poor mare like that could only belong to a lowlife. What are you doing here?!”

“With all due respect, Don Leandro, I simply came for a dance,” Pancho said, pulling the young woman in tight. “And I won’t be leaving until I’ve had it.” And moving to music that could only be heard by the ears of Pancho Castillo, he began to dance, twisting and spinning around the room, holding her close.

One of armed guards raised his pistol as if to take a shot before the Spanish lord held up his hand to stop him. “You are indeed a fool if you think I trust my daughter’s life to your aim.” He then motioned to the rest of the men surrounding him. “Get him!”

As the men moved to capture Pancho, he leaned the young woman in close for a long, deep kiss before finishing his dance with a flourish, twirling her across the floor into the oncoming mob. As they struggled to catch her, the outlaw jumps over the balcony railing and off into the night, bullets flinging off the dust in his wake.

Don Leandro pounded his fist on the railing in frustration before turning back to his daughter. “Mija … where is your necklace?”