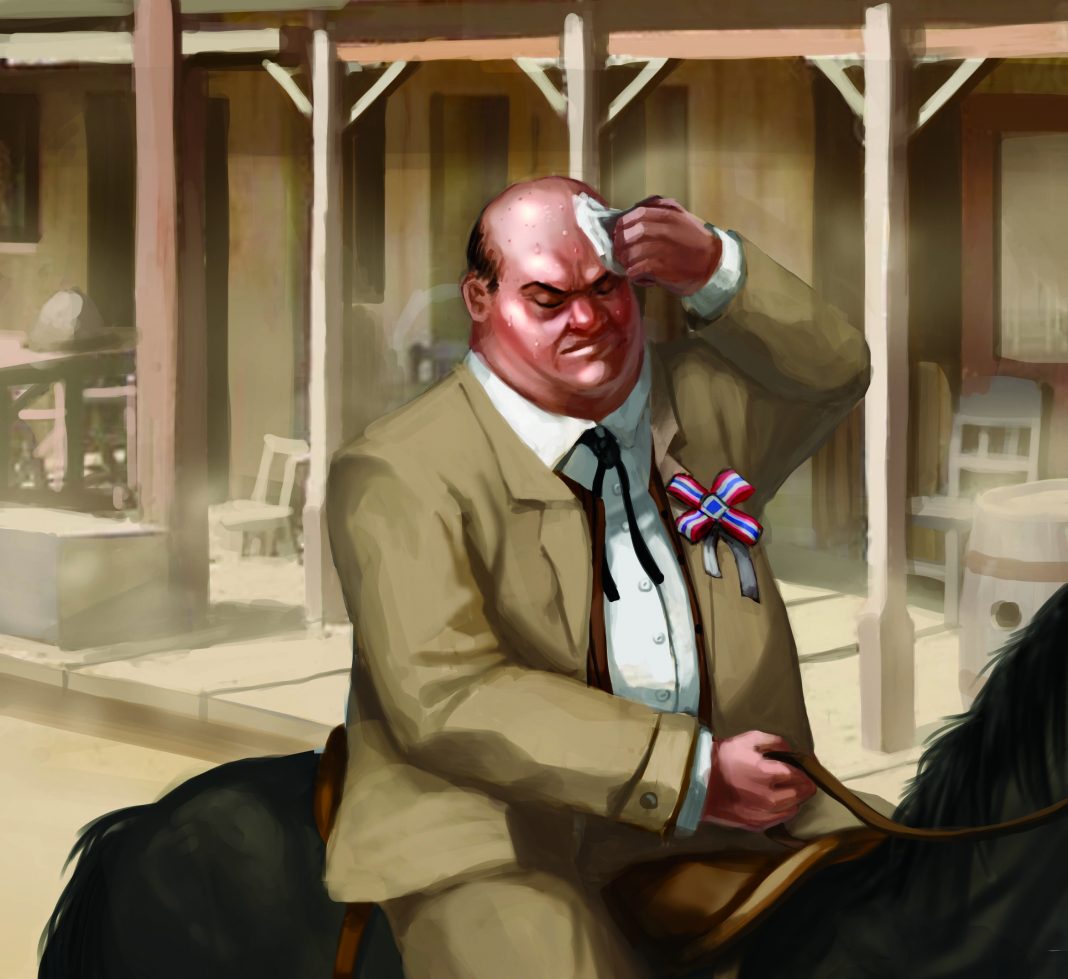 A sign begged, “Excuse our Dust.” The rotund figure brushing dust from his wrinkled suit was clearly unforgiving. His rumpled suit was dirty from travel. He finally surrendered to the dust and took his first look at the town of Gomorra.

The sound of hammers rang out and the smell of fresh-cut lumber filled the air. The town was a mixture of old, new, and temporary as roofs of wood and canvas lined the streets. The scattered remnants of older buildings served as salvage yards for those working to rebuild. Whatever had happened before (and the stories were many), it was booming now. There were even posters advertising a circus in town.

Crowley mopped sweat from his bald head as he lamented his old hat. He’d lost it a week earlier diving out of a brothel window. Who knew that the owner of the ranch would return from the trail drive weeks early? Who knew that the sheriff would be able to locate him so quickly? Sometimes, Wilber cursed himself for his own shortsightedness. It had been yet another close brush with the law.

At the General Store, he shopped for a hat. An expensive derby caught his eye. Glancing at the price tag, he reached into his coat pocket and gently fondled the deck of cards there. After a moment of concentration, the price on the tag began to blur and change to a greatly reduced price. The clerk gave him a dirty look when he went to the counter to pay, but Wilber stroked the cards in his pocket again and the clerk’s expression brightened.

As he left the store, a flyer tacked to a post rustled in the breeze, attracting his attention. The colorful flyer described an upcoming election. Wilber loved politics, finding them quite lucrative.

A fellow wearing a nice suit and a shiny badge was passing by and Crowley called to him. “Excuse me, deputy,” he said.

The man grinned slightly as he answered, “The badge says ‘Sheriff.’ Sheriff Dave Montreal at your service.”

“Ah do apologize, suh. Ah was just wonderin’ about the upcomin’ election for mayor.” Once again, Crowley wiped his face with his handkerchief. “Ah am a fella with some experience in municipal matters. Ah’d be a fine candidate if there is not some sort of previous residency requirement.”

Montreal pulled a thin cigar from his pocket. “If there were, there aren’t many here who could meet it anyway. It sounds like you should go to the Town Hall and register, pronto. Things tend to move fast here in Gomorra.”

Crowley smiled and asked, “Any other candidates runnin’?”

“Nope,” the sheriff said as he struck a match and lit the cigar. “Not yet. Who knows? Maybe you’ll be the only one who wants the job.”

“Ah doubt that, suh, but thank you for your assistance,” Crowley answered. He thanked the sheriff and began searching for the Town Hall. He decided it couldn’t be that easy. Or could it?