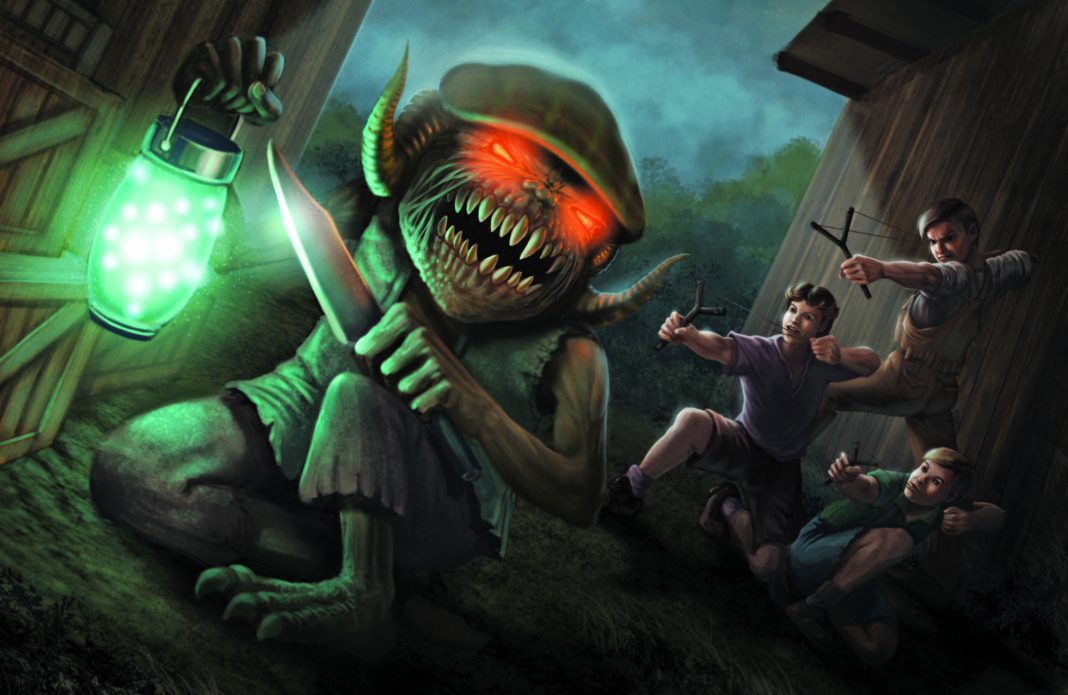 Much like every other human being who had ever received such a directive, Tyler immediately turned around.

It took him a few seconds to pick out what he was looking for, but once he did, there was no mistaking it; that little goblin was back, with its dumb little hat and its jar of fireflies, grunting as it rummaged through a pile of garbage left behind Yan Li’s tailor shop. Tyler, Drew, and Jack had been hunting the critter for days, when they weren’t busy playing marbles or climbing trees or throwing bugs in each other’s hair, and now here it was, right behind them.

Drew slowly, wordlessly, loaded a marble into his ever-present slingshot, and pulled it back. The critter extracted itself from the trash pile as if it was done — though it hadn’t taken out anything — dusted off its hands, and then froze as if it knew it was being watched. Just as it started to go for something in its belt, Drew let fly, the rubber of the slingshot making a satisfying WHAP right before the even more satisfying THWACK of a marble nailing a goblin right in the back of the head. It bounced forward into the pile, sprung back to its feet, whirled around, and growled, baring sharp and snaggletoothed fangs and waving a knife at the three youngsters.

“Get ‘im!” shouted Jack, and every ounce of intimidation in the critter left with a high-pitched yip. It dropped the knife, abandoned the jar of fireflies, and bounded up the back wall of Yan Li’s, digging its little claws into the wood to scramble up to the roof. The boys may have been champion climbers of most anything an adult might tell them to get the heck off of, but they were no match for critter claws. They heard it jump off the roof to another, and Drew looked to his two pals. “We got him on the run! Let’s split up and find him!”

Half an hour later, they returned, empty handed.

“You find him?” asked Drew, even though he knew the answer.

“Nope,” said Jack. “Couldn’t see it anywhere. The heck do you think it was doin’ anyway?”

“Dunno,” Drew said. “Nothin’ good. And until we catch ‘im, he’s just gonna keep on doin’ it. Who knows? He could be stealin’ ladies underthingies or poisonin’ our water or drawin’ those evil un-crosses on stuff so God gets all mad and smotes us, or, or somethin’ so bad we can’t even figure it!”

Both older boys turned to him, eyes and jaws widening. “Ty… How do you know that?”

“‘Cause me and Mittens saw him like ten minutes ago in the General Store, just shovelin’ ‘em into his head!” He grinned. “That means he’s gotta find me now, right?”