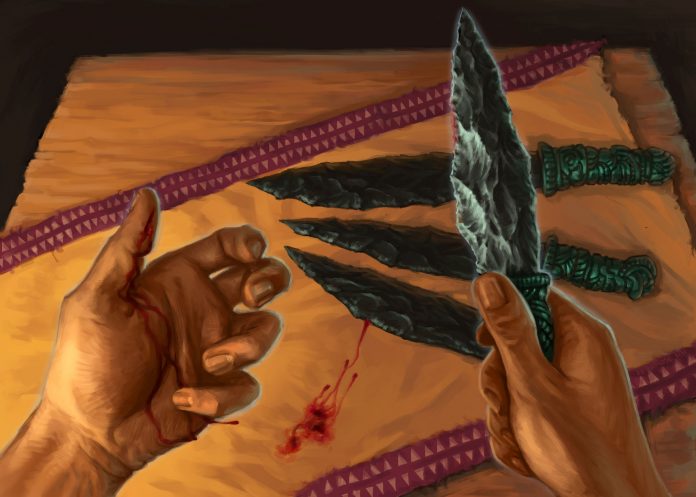 “Just as I thought,” said Smiling Frog. “The Ever-Triumphant Trail was too well-walked for them. They had to wait until she cut around Devil’s Armpit to make their move, the cowards.”

The old Pomo tracker slid down the ravine to inspect the scene, leaving his two companions to follow after. A covered wagon hung with shawls, beads, dreamcatchers, and all manner of assorted geegaws laid on its side, smashed half to pieces. All that remained of its driver was a pile of rags, but nobody had bothered to either kill or free the horse that had pulled it. The nag was still alive, baking in the sun. He took an umbrella from the wreck, opening it to give the animal some shade, and unslung his waterskin to give the horse a drink. It gave him a wary look that said it had no energy left to act thankful.

Animal taken care of, Smiling Frog inspected the wreckage. Careful not to jostle it too hard and send it into collapse, he propped open the back door and let the harsh noon light stream in. Tiny wooden totems, scrimshaw necklaces, decorative furs, and crafts in varying states of completion were scattered about the back, but he specifically sought a black iron box, inlaid with as many markings to ward off evil as there were tribes in the Great Maze, its hinges covered in paper talismans. It was the only thing of importance this wagon had to carry. And as he sifted through the cargo piece by piece, it became clear that the box was gone.

“They took it,” he said, standing and dusting off his hands.

“Finally,” replied Laughing Crow as she rode up to the wagon. “If I had to haul these old bones all the way up here again to give them another chance at it, I’d wind up with saddle sores up to my neck.”

“Saddle sores?!” groused the spectral Inuit woman floating at her side. “She drags me across the veil, dresses me up like a caravaner so I can get shot by a pack of hoodlums, and she’s complaining about saddle sores?”

“If they didn’t shoot anyone for it, they wouldn’t have thought they were stealing something valuable!” Smiling Frog protested, before realizing that having her shot wasn’t even his idea. “This is the Maza Gang, not Sloane. Small-timers need a bit more hand-holding.”

“We ARE sure this is a good idea, right?” the old ghost asked him. “Those things are dangerous in anyone’s hands. They could be downright deadly in his.”

“We’re sure,” answered Smiling Frog. “Well, Stephen is, and I trust him. Hawk may be strange, but her ideas usually work out somehow.”

“I just wish she coulda saved us some trouble and told us how to GET the knives to him,” added Laughing Crow. “Because if they didn’t take the bait this time, I’d have just knocked on Mayor Whateley’s front door and tossed them into his lap.”