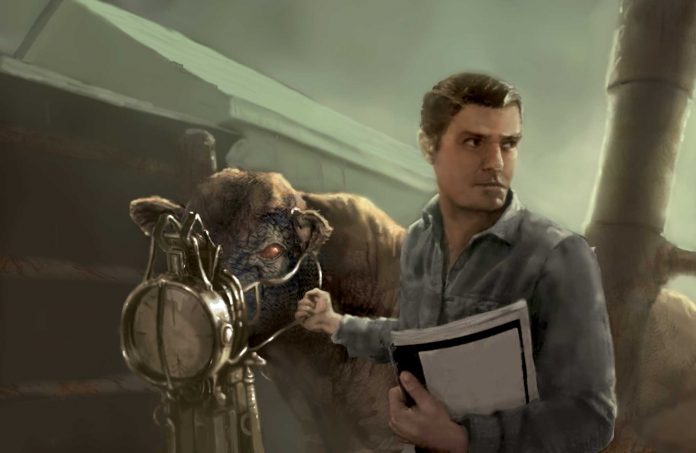 “Everything’s secure, Kyle,” the cowpoke said, moving to the door. “You sure you’ll be alright tonight?”

The young doctor looked up from his workbench, disturbed by the interruption. “Yes, Bill, thanks.” He paused and closed his eyes to rub the bridge of his nose, belying his exhaustion. “Perhaps I’ll figure this out in an evening without all the hammering. I’ll see you in the morning.”

Wagner returned to his work as Bill locked him in the barn of the new in-town stockyard for the night. Lillian Morgan’s new breed was nearly perfected, and so she ordered the facility’s construction to speed her prize product to market. There was still work to be done, but once finished, it would include the best security that the Institute could muster, eliminating the threat of rustlers. Then nothing could stop the flow of new cash into Lillian’s coffers.

If only Kyle could get them to eat.

The development process had proceeded according to Prof. True’s theories remarkably. Muscular expansion was off the charts. Growth rates promised slaughter after only six months under the process and even that was decreasing. But progress stalled when the animals refused food. They shook off True’s auto-feeders. The ranchers put them out to pasture, but they refused to graze. Kyle had tried other grains, even experimented with corn, but nothing worked. Weight loss had set in. Atrophy brought muscle loss (and corresponding meat reduction). The Morgan brand’s promised future began to wane, leaving Wagner, the ranking veterinarian, responsible for restoring the breed. So he sat in the darkened barn, poring over notes and journals, surrounded by the low breathing of the animals he was trying to save.

Suddenly, a slam echoed from one of the rear stalls, startling Kyle. He feared the worst … that one of the animals had finally keeled over in starvation. He hurried back to investigate.

The animals had been disturbed by the sound as well, the stalls humming with wakened lows as Kyle passed by. Upon reaching the stall in question, he saw that one of the gate hinges had splintered. As he moved closer to examine it, another slam came, causing the gate to explode open, catching him squarely across his brow and sending him reeling to the floor.

As Kyle lay there, barely conscious, a steer walked from the stall, examining the injured doctor through its glowing red eyes. As the animal moved around him, Kyle suddenly felt a sharp pain and pressure in his side, causing him to cry out feebly. The pain continued to intensify as the other animals became agitated, each kicking and ramming until the gates to their stalls burst open as well. Once free, each approached the prone young man with curiosity, then with something else.

Kyle could feel the animals jostling him as the pain spread throughout his body. Blood from the wound on his head began to blur his vision, but he managed to lift his head to glimpse the cause of his ever-increasing torment. The pain’s intensity combined with the shock of what he saw caused him to pass out entirely, his fate sealed.

At least Kyle finally got them to eat.