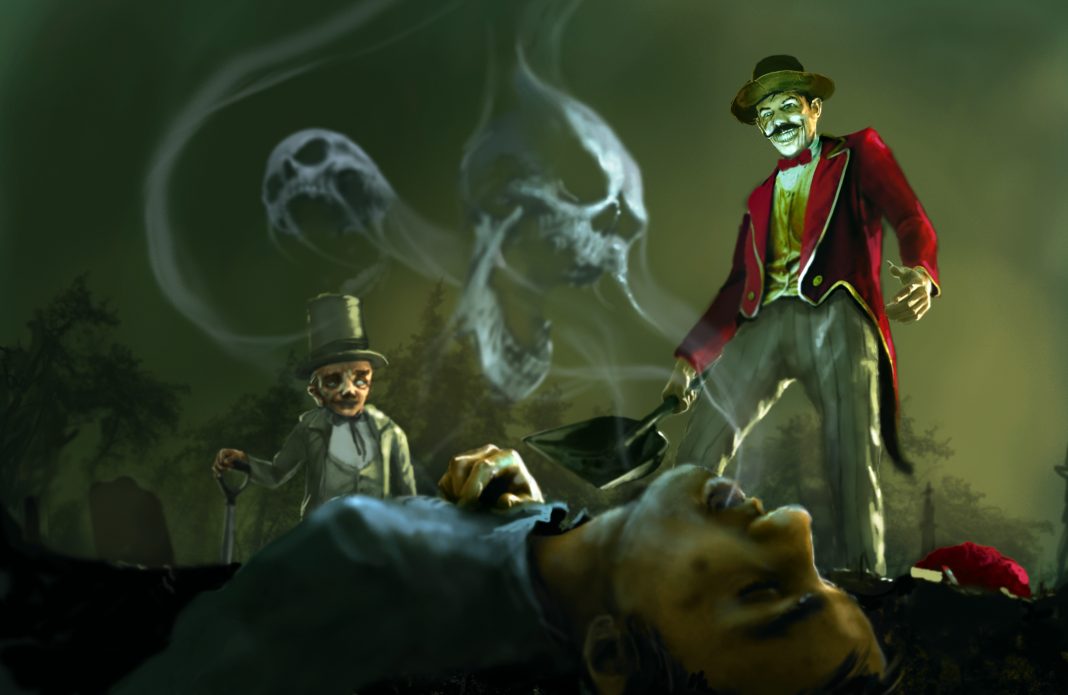 The stench of burnt flesh rose from a body beside a half-dug grave, the headstone labeled Tom Place. Kevin Wainwright, standing less than half the size of his master, held a stone idol carved with a myriad of tortured faces. When Ivor had Valeria Batten research, she warned of legends that it opened gateways to other realms. If true, the idol could make an excellent tool when combined with Ivor’s own unnatural abilities.

Kevin frowned, prodding the body before him with his boot. “It didn’t work. Forgive me, sir. I must not have held it properly. Should we call it a night?”

Ivor removed his top hat, setting it by the headstone to inspect the charred corpse. “Nonsense, Kevin. We’re not done yet, m’boy,” he said. “There’s only so much time before our employer comes to collect this thing, and I intend to make use of it before then.” Despite the smell, he took in a deep breath and concentrated. Light trickled from the idol, the gravestones casting shadowy figures as if to judge Ivor’s deeds.

“Sir, this thing’s gettin’ hot. Don’t know how much longer I can hold it,” Kevin squeaked.

Though the life from the body was long gone, Ivor could still feel its spirit through the stone’s radiant glow. He raised his hands, channeling its energy through his fingertips. Power flowed through him. “Te ab profundo inferni. Accipe oblationem corporis. Oriuntur!” Ivor commanded.

The stone burst with light. Kevin dropped it onto the dirt, cursing. Raw energy rushed towards the body on the ground. Ivor allowed some of his own life flow to depart his fingertips, to float toward the body and fill its nostrils like air. Breathe.

A smoky substance seeped from the body’s chest, merging with the stone’s power and Ivor’s life flow. It swirled around the body, encompassing it. Little remained of its original form, but it had come to life.

The creature darted toward Ivor, releasing an angry and wretched scream. “Why did you bring me here?!” It lunged forward, wrapping its clawed digits around Ivor’s neck.

The ringmaster stared at the abomination; it was the summoned, and Ivor its master. He crossed his arms and would not budge, his infamous grin creeping across his face.

The creature wailed, seething with rage, but Ivor’s gaze held it fast. It recoiled, releasing his master’s neck and bowing its shadowy head in defeat. Upon meeting his gaze again, the creature returned a toothy grin, a pale reflection of its master.

“A splendid result, wouldn’t you say, Kevin?” Ivor said, returning his top hat to his head with a flourish.

“You make sure to look after him now,” Ivor said. He spun to depart.

“Certainly.” Kevin turned to the monstrous creature. “You smile just like him, you know. Well, Smiley, let’s get to work.” The thing followed without question. “No, ‘Smiley’ ain’t a good name. What’d they used to call you? Tom? Smiling Tom it is then. Welcome to the family.”