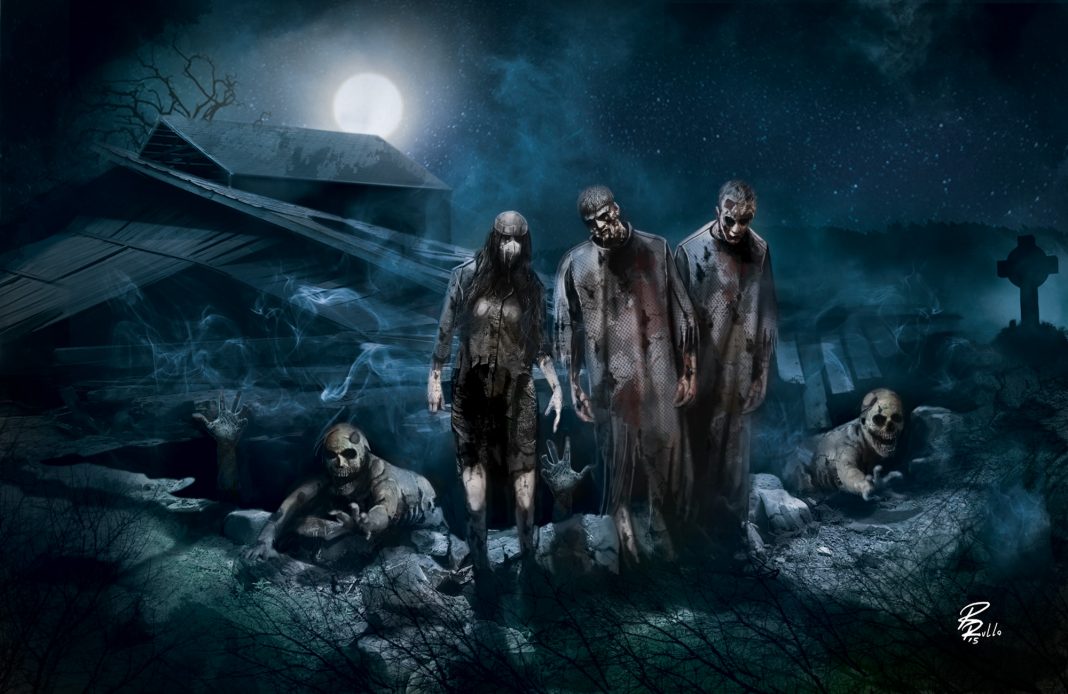 Abram Grothe hunched over his desk, trying to drown out the chatter surrounding him. Those who’d made it to the office to hide from the chaos outside had been arguing for what seemed like hours. Every so often a moan or scream would come from outside, a reminder of horrors that sought their lives.
“What are we waiting for?” Pancho Castillo exclaimed, loading fresh rounds into his pistol.
“We’ve got men, guns … let’s move! If we wait around for Hawley to act, it will be a horror
show!” He looked around the cramped room for support, meeting only uncertain stares. Even his fellow outlaws only lent him cautious scowls at the badges in the room.
“Will be a horror show?!” shouted Valeria Batten. “What do you call this!? I won’t end up like that deputy!” Her voice trailed off in a whisper, “I won’t …”
“I have a solution!” announced Louis Pasteur, the latest arrival. He set a wooden case on the desk and snapped it open. The velvet interior was lined with several syringes and a series of glass vials. He slid one free and held it in the air. “This particular bacterium, injected into the bloodstream, should –”
“Bacterium!?” Wendy marched forward to stand toe-to-toe with the Frenchman. “You want to inject us? This town is not a science experiment, Doctor!”
“Mademoiselle, I assure you –” Wendy cut him off, snatching the vial from his grip.
“You can’t assure a damned thing!”
The arguing voices rose, crashing through Abram’s head like a runaway train. He stood, his chair slamming to the ground. All eyes locked onto him, as if he could part the heavens and shine a divine light on their woes. He avoided their stares as he walked silently into the back room that held the office’s two cells, finding small relief as the arguing resumed. The door at the far end of the room rattled as something slammed against the wooden frame outside.
“Lord, show me the way,” he said, sliding his fingers through his hair. “Show me something!” His fingers curled into a fist, slamming against the wall and rattling the iron bars.
He jumped as a voice called out from the last cell: “Easy on that oak, Sheriff!”
Abram peeked around the corner to see Prescott Utter lying on the dingy cot, hat pulled down over his eyes.
“What are you doing here?” Abram asked.
“Just tryin’ to get some shuteye,” Utter replied, unmoving. “Although with the way you lot have been hollerin’, that ain’t easy.”
“Nothing seems to be lately.”
“Yep. Heard about your troubles with them carnies. Might be time I lent a hand.”
Abram scoffed. While Prescott had been reliable with information, he was more likely to have a half-empty bottle of whiskey in his hand than a Colt. “No offense, Prescott, but I don’t think you’ll be much –”
Suddenly the latch on the back door broke free. The door swung open, and a mangled figure charged into the room. Prescott spun off of his bed in a flash, pistol drawn. He fired one shot directly between the intruder’s eyes, sending it crashing to the floor. Abram rushed to the door, sparing a questioning look back as he secured the latch.
“I may not look it anymore,” Prescott said, holstering his sidearm, “but this ain’t my first rodeo with folks like Hawley.”
Abram looked down at the figure sprawled on the floor and sighed. “I know this man … he
played piano at The Union.”
“I’d imagine you know most of ‘em. But they’re gone, son. Ivor’s plague is all that guides ‘em now.”
Abram nodded and ran his fingers over Evanor’s hilt. “This ends … tonight.” He walked from the room, and Prescott followed. “Someday you’ll have to tell me where you learned to shoot like that.”
Prescott chuckled. “That will be a long confession.”
All eyes turned to Abram as he re-entered the office. Without breaking stride, he walked to Wendy, taking her hand into his. Her pensive stare softened as she looked into his eyes. He nodded, and she nodded in return, letting go of the vial.
“The time for talk is over!” Abram said, addressing the room. “You can stay here and wait this out … or you can follow me to Hawley’s circus and, God willing, burn those wretched tents to the ground!”
Heads began to nod, and murmurs of agreement floated through the air as Abram handed the vial to Pasteur.
“Alright, Doctor … tell us what you have in mind.”