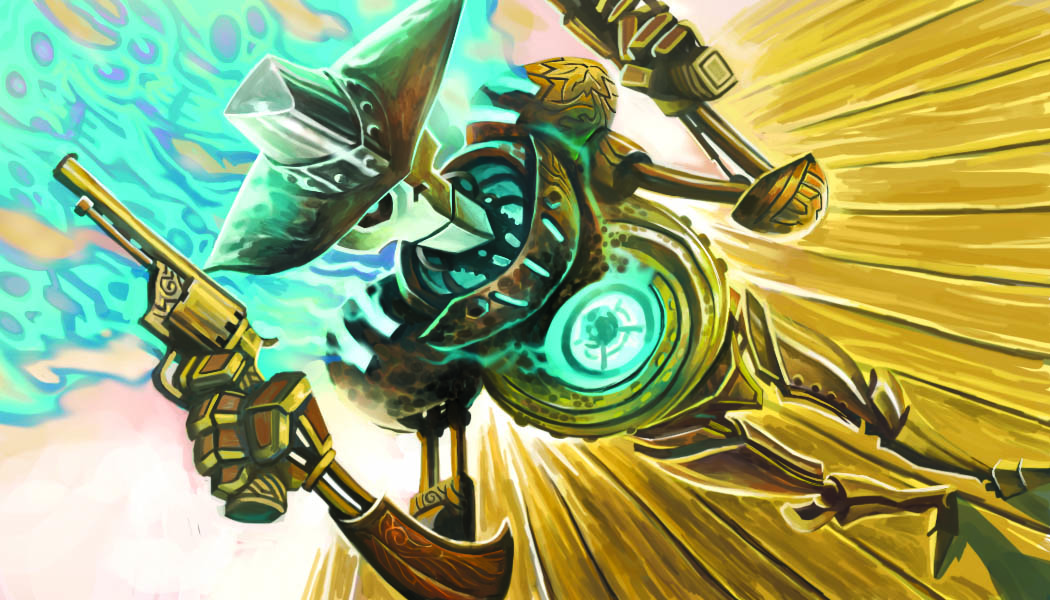 “Okie dokie, Quaterman, time to turn on the juice and cut you loose,” Drew Beauman said as he adjusted a gear and ignited the ghost rock reservoir. With a firm push, he sent the automaton into the 1st Bank of California.

The mechanical man tottered and teetered before purposed strides carried it toward the bandit, who brandished a six-shooter. The teller’s widened eyes alerted the robber to Quaterman’s imminent approach.

Whirling in surprise, the bandit swung his gun with a force that clanged against the machine’s temple, its neck recoiling to and fro. The bandit shoved Quaterman aside and bolted out of the bank.

Beauman rushed inside and recalibrated his creation. Two money sacks laid open on the counter, currency scattered about. “Well, what do you know,” he said to the banker, “that dude done left his hard earned savings behind.” Turning back, Beauman steered the metal man out the door. “Time for us to make a deposit ourselves, old chap. Go get him.”

Quaterman reemerged into Gomorra’s harsh afternoon light. The automaton’s pistols swung down and across, each second punctuated by a pair of shots. Errant at first, the last brace of shots hit the fleeing bandit, sending him sprawling onto Main Street’s dirt track.

“Enough, Quaterman, you got got him good,” said Beauman. Despite the chambers falling empty the mechanical man kept firing away at the bandit. “That’s some plumb fine shootin’ there, Quaterman. Well done, indeed,” Beauman said. “Now, fetch him and we’ll let the sheriff take care of the rest.”

At Beauman’s command, Quaterman leaned over and picked up the wounded bandit by the shirt collar and pants seat. The mechanical construct marched towards the sheriff’s office, swinging mechanical arms swung back and forth, bumping his package into railings and walls along the way. The bandit moaned in agony.

The trio arrived at the repurposed saloon that served as the sheriff’s office. “All right, Quaterman, we’re here. Kindly deliver our prisoner,” said Beauman.

The machine raised the bandit over his head and tossed him through the bat-wings. The bandit’s weight sent one half-door wing flying off its worn hinges. Beauman and Quaterman followed behind.

Startled, Lucy Clover looked up from behind the bar that served as her desk. She cocked a pistol at the disheveled prisoner, then aimed at the human-shaped contraption. “What in the name of all that is good is that?” Only when she recognized Beauman emerging from behind Quaterman did Lucy put down her gun. “Drew, what in tarnation have you made now?” she said.

“Ain’t no stopping an automaton who is in the right and just keeps on coming,” said Beauman with smug laughter.