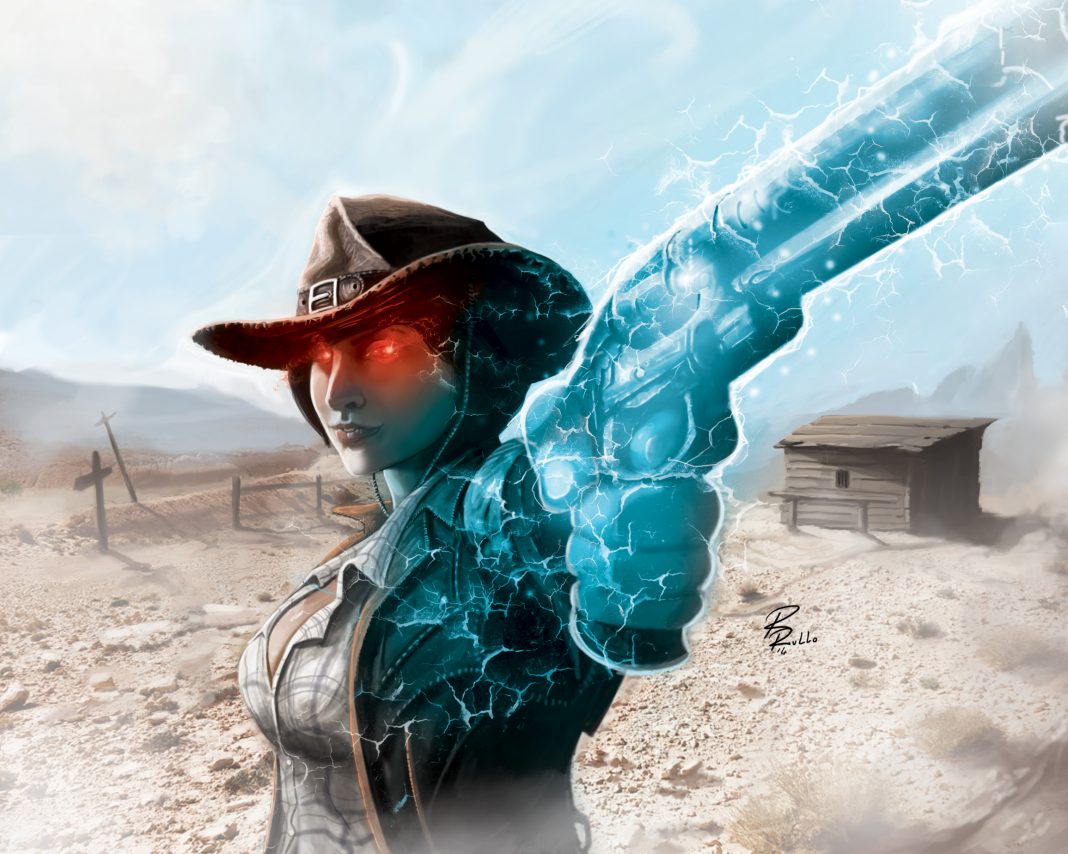 Pancho Castillo’s stolen horse reared as he let off another shot into the frenzy of motion around him. There was blood on his boots, and in his hair. Blood belonging to enemies, blood belonging to friends.

Bringing his mount under control, Pancho swore aloud. Sloane was lost somewhere in the mayhem. His horse gave another nervous whinny as a group of terrified townsfolk ran by, pursued by one of the wretched creatures that were swarming through the town like locusts. Dressed in the rotten clothes of the Sanatorium, the man snarled and spat as it tore after its prey.

Pancho leaned aside in his saddle and pistol whipped the thing across the back of its scarred head, sending it tumbling to the dirt in a heap. He looked back over his shoulder, searching. Ulysses had been right behind him, but the chaos had separated him as well. Pancho cursed and dug his heels in, spurring his horse on through hell.

A great crash came from nearby, and the entire building to Pancho’s left shook as a gigantic figure, grotesque with bulging muscle, smashed through the doorway with brute strength and rumbled off into the crowd. The Fourth Ring was throwing everything they had at Gomorra. He rode alone through a burning nightmare of clowns and fear and made a mental note to save his luckiest bullet for Hawley’s grinning face.

A youth in blue on horseback almost rode into him, and stopped long enough to catch his breath.

“What in blazes is going on kid?” Pancho called to him. The young man stared for a moment, his eyes wide with shock, but steeled himself in his saddle.

“Everyone with a gun and guts to use it is meeting at the sheriff’s office. We’re gonna take the town back.”

The boy looked like he was about to pass out, but rode on anyway. Pancho was watching him go when there was a blaze of blue light up ahead, illuminating the smoke from a burning building and setting a group of the slavering sickened ablaze.

“Kingsford,” Pancho muttered to himself. Not everyone was lost, at least.

Maria Kingsford was standing in her stirrups, a blazing pistol in her right hand and flames blasting from the palm of her left.

“Maria, whole town’s gone to hell! We gotta do something!” he yelled to her as he rode up, trampling a clown holding a pitchfork.

“Where’s Sloane?” Maria roared. Her body was surging with power and Pancho could almost feel her voice on his face when she spoke.

“People are dying, amiga. We gotta help them. The Fourth Ring is tearing the town apart!”

Pancho aimed and shot down a lanky trapeze artist running at him with a butcher’s knife. “Sloane can take care of herself. These people can’t.” The fire in Maria’s eyes dimmed slightly. The ground shook as another hole to Hawley’s hell below the Earth opened up somewhere across town. “Help me, Maria. We can help stop this.”

“You got an army in the dust back there Castillo?” Maria frowned.

Pancho looked down the long burning road to the Sheriff’s office, “Maybe I do.”