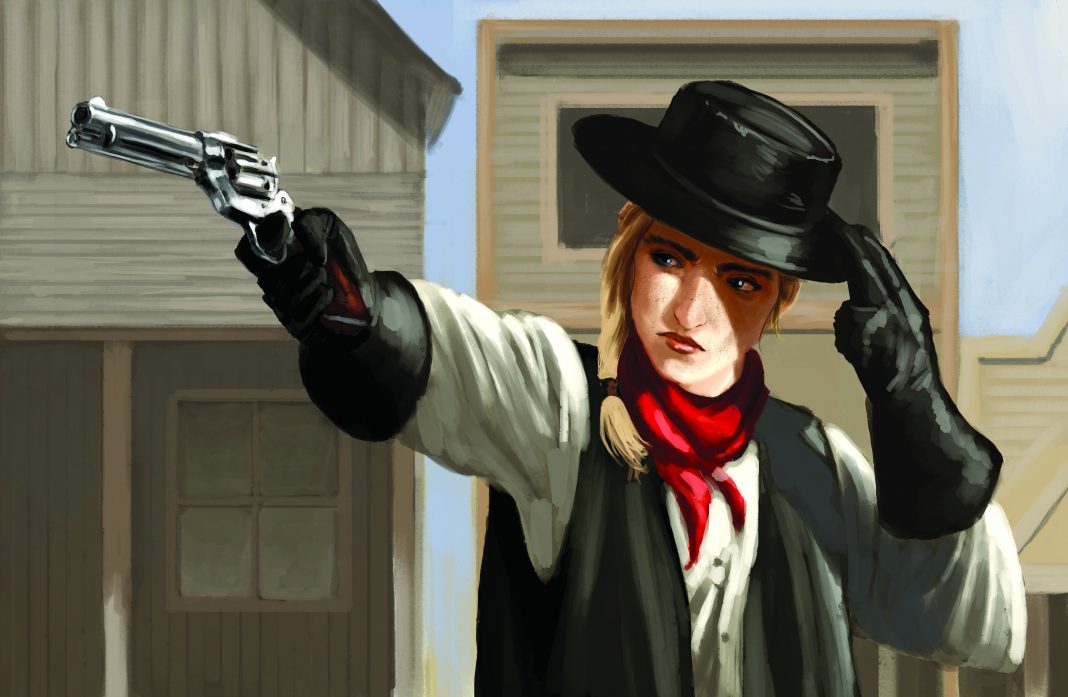 The dirt flew with every impact of the horse’s hooves as the rider tore through the streets of the ghost town of Soddum holding high a torch, its light dancing across the empty buildings and sidewalks. Allie Hensman pulled her horse to a stop in front of her destination, a ruined saloon whose only unbroken window glowed with firelight amidst the darkness. She quickly dismounted, hitched the reins, and sidestepped the remains of broken door barely clinging to the wall before hearing a sudden click and feeling the barrel of Blackwood’s pistol brush her ear. She froze and waited a moment before the accented voice of Jonah Essex broke the silence.

“Well if it isn’t our little sparrow, come home for a song,” he uttered inquisitively. He faced her from a table across the room, the talisman around his neck glowing faintly, matching the intensity in his eyes. He flicked his wrist slightly, extinguishing both and dismissing the pistol threatening her.

“Just in time too,” Fred Aims announced, rising quickly from behind the old, dusty bar with a slightly less old and dusty bottle of whiskey. He yanked the cork with his teeth and snagged an unbroken glass. He poured as Allie strode forward and finished just before she snatched the bottle away and turned her back to the rail for a deep drink, an odd juxtaposition for the young woman in the farm dress.

“I got news,” she exhaled, coming up for air. “They built the stage in front of City Hall. Espinoza’s picked her spot on top of Charlie’s Place.”

“How’s that news,” bellowed Silas Aims from further down the bar. “That’s what workin’ folks commonly call a ‘plan.’ ”

“I ain’t finished,” Allie shot back with a narrowed glance. She took another drink, seemingly bracing herself for the next words. “Sheriff’s come back.”

“What?” Blackwood interjected. “You said he’d be in Sacramento two more days at least.”

“I know what I said! But something changed. Whatever his reason, he rode in just before sundown. I got out here as soon as I could slip away.” She paused for a moment to take another swig from the old brown bottle then shook her head slowly. “He’s sure to be at that debate now.”

The air remained still for several moments as the outlaws contemplated this news. Blackwood broke the silence. “We should hold off … call Angélica back until we can think of something else.”

“Why,” the elder Aims said. “This job just got interestin’.”

“I agree,” Fred added. “The only thing better than mussin’ up their little meetin’ is gettin’ to do it front of that high-falutin’ sheriff.”

“Don’t ya’ll see,” Blackwood replied. “Abram and that Chinese woman are one thing. But once those bullets start flyin’, Montreal’s bad for the mix. Order’s that man’s job … and we’re gonna need chaos to get ours out of town.”

“He’s right.” The room went silent as all eyes shifted to a table in the back of the room and the woman reclining at it. She whisked back her dirty blonde hair to take a long drag on the cigarette hanging from her lips. “The sheriff changes things.”

“You sure about that, boss?” Jonah wondered, rising to turn to her. “Badge or not, we may not get another opportunity.”

Sloane kicked back from the table and stood, approaching the bar, her spurs ringing as she stepped across the old floor. “I said it changes things … doesn’t mean it’s not happening.” She pulled the bottle from Allie’s hands and took a drink herself. “Looks like your time has come after all, girl. Make sure you go heel tomorrow. You’ll be closest to the stage when the first one goes down. Make sure the second does the same.”

“I still don’t like this, Sloane,” Blackwood said. “There’s no need to push this. Why do we care so much about an election anyways?”

Sloane turned sharply toward Blackwood, her finger brushing across the crimson holster at her side, and the former Confederate at the door steadied himself under her gaze. She walked toward him. “As long as Gomorra keeps pretendin’ they’re in charge, I’m gonna keep reminding them otherwise. You got a problem with that, Lawrence?”

“Then turn in, the lot of ya,” she ordered, pushing past Blackwood to the door. “Haven’t you heard? There’s a debate tomorrow.”