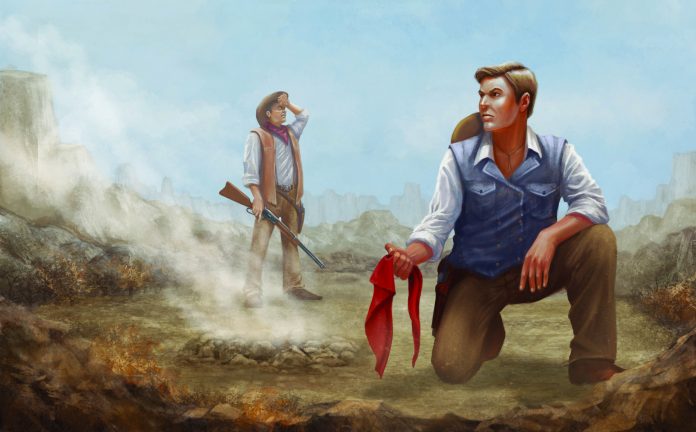 Sundown
Philip Swinford dug into the hard dirt of the plains outside Gomora. Behind him stood Sheriff Dave Montreal, arms crossed.

“Okay, Philip. Tell me what happened,” the sheriff said.

“It all started earlier today…”

High Noon
An extended palm met Philip Swinford’s chest, preventing him from moving forward. “Deputy, if we at Hunter Protections are suspected of any wrongdoing, where’s your warrant?”

“If you aren’t doing anything wrong, what’s the harm in me lookin’ around?” Philip asked.

As much as Philip wanted to protest, the larger man was right. He’d need a warrant or a posse to go any further. Philip thanked the man for his time with the tip of his hat and a sarcastic smile before continuing down the street.

Gomorra’s hot sun beat down on him. Philip waited by a horse tack, watching the comings and goings at Hunter Protections. Hours passed, but Philip had a gut feeling something worth his time would happen soon.

A man with a dark hat and thin goatee left the office, suitcase in hand. The suitcase was dark leather like the one reported missing several weeks ago from the robbed Morgan Cattle Company coach. This was it.

The man hurriedly strode through Gomorra, weaving through Main Street’s back alley to Hill Street, taking an indirect route through the town. Philip had trained hard for this with Wylie Jenks. He kept the man in sight, but stayed back enough not to arouse suspicion.

Philip followed the man out of town, taking a path around a couple of hills to the open plains. Not much light remained, leaving only a silhouette of the suspect. Philip made his move and drew his pistol. “Hey you! Don’t move!”

Startled, the man cursed and took off running. He dropped his briefcase in the process.

Philip grabbed the bag and ran to get Dave.

Sundown
“And this is where I last saw him,” Philip said. He set the briefcase down on the ground and opened the latch. Its contents: a single pistol. Bent down as he was, Philip saw something else in the grass and picked it up.
A red bandanna.

“What more do you need, Dave? We’ve got him carrying a gun and a red bandanna. Hunter Protections has to be a front for Sloane, pure and simple,” Philip said.

Dave stepped toward him, scrutinizing the evidence. “I’ll issue the warrant … after the election. I need all hands on deck to make sure the debate goes off smoothly tomorrow.”

Philip opened his mouth to protest but shut it again. He clutched his fingers tightly against his coat pockets. Anger swelled in him. “Fine, Dave,” he said. “But if somethin’ goes down at the debate, I doubt even you could stop me from seein’ Sloane at the end of a rope.”