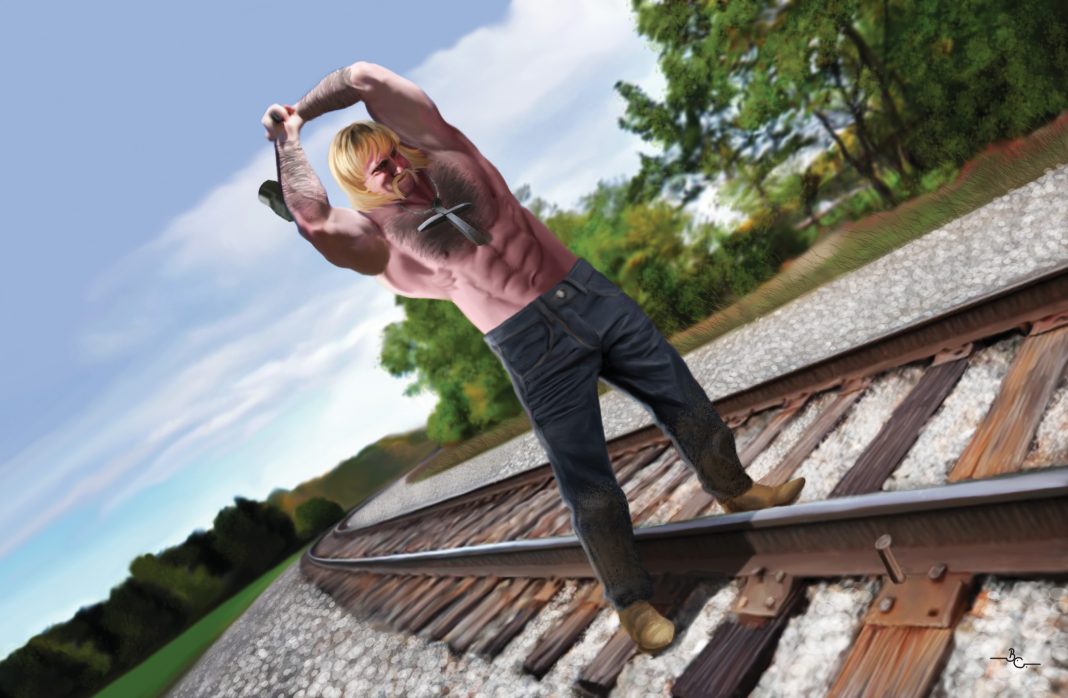 There was a ringing in Erik Samson’s ears; he tasted blood. Coughing, he pulled himself up off the street and found dust everywhere. Somewhere nearby, a woman screamed.

He had been walking home, hadn’t he? Strolling through the evening light, work tools at his hip. Then something happened. He couldn’t remember.

Erik tried to call out, but his voice was broken and hoarse. Blurry shapes moved about, people stumbling. As he regained his footing, he saw a woman nearby, white dress stained black, her hat crumpled from the force of the blast.

The blast! There’d been an explosion. Erik rushed to her side and pulled her up into his powerful arms. “It’s okay, ma’am. You’re safe,” he said. Erik looked about, seeking answers. Everywhere in the twilight there was dust and smoke and cries. He carried her to the wall of a nearby building and set her down. He began searching for other victims, almost falling into the hole before seeing it, sending a mound of dirt scattering down before him.

It took Erik a moment to shake the ugly dread he felt looking into the opening at his feet. The crater in the center of Main Street yawned, gaping and deep, a foul stink rising up from below. As he squinted, he saw movement in the hole. “There’s someone down there!” came a shout from nearby, and people crowded to the edge to peer in. A figure lingered there, some poor soul who’d fallen in no doubt.

Erik climbed down, the jagged sides easy to descend, and found himself peering into the depths of a tunnel. The figure who was staggering towards him from the darkness was a miserable sight, soiled clothes mired in filth. “Sir? Are you okay?” Erik said as he narrowed his eyes, trying to see through the dust and smoke. The figure had a gait like a dead man, arms slack, mouth agape.

The sense of dread returned suddenly, and Erik found himself reaching for the hammer dangling at his hip. The eyes in the scarred face were like those of a rabid dog, wild, bloodshot, and brimming with madness. His fingers fumbled as he tugged the steel free, but the man leapt for him with terrifying speed, hands and nails snatching and dragging Erik down. He struggled, spit flying into his face from between the broken yellow teeth of his attacker, as the stink of decay washed over him.

There were more screams above, not confusion this time, but terror. Erik tried to cry out a warning to them, but his call was smothered in the surge of shambling bodies that emerged from the blackness before him. He braced himself at the mouth of the tunnel, pleading God for strength. They came at him, arms and teeth and wild staring eyes, climbing over one another in a frenzied wave that hit with the force of a tidal wave as the army of blighted spilled onto Main Street like a sea of the dead.