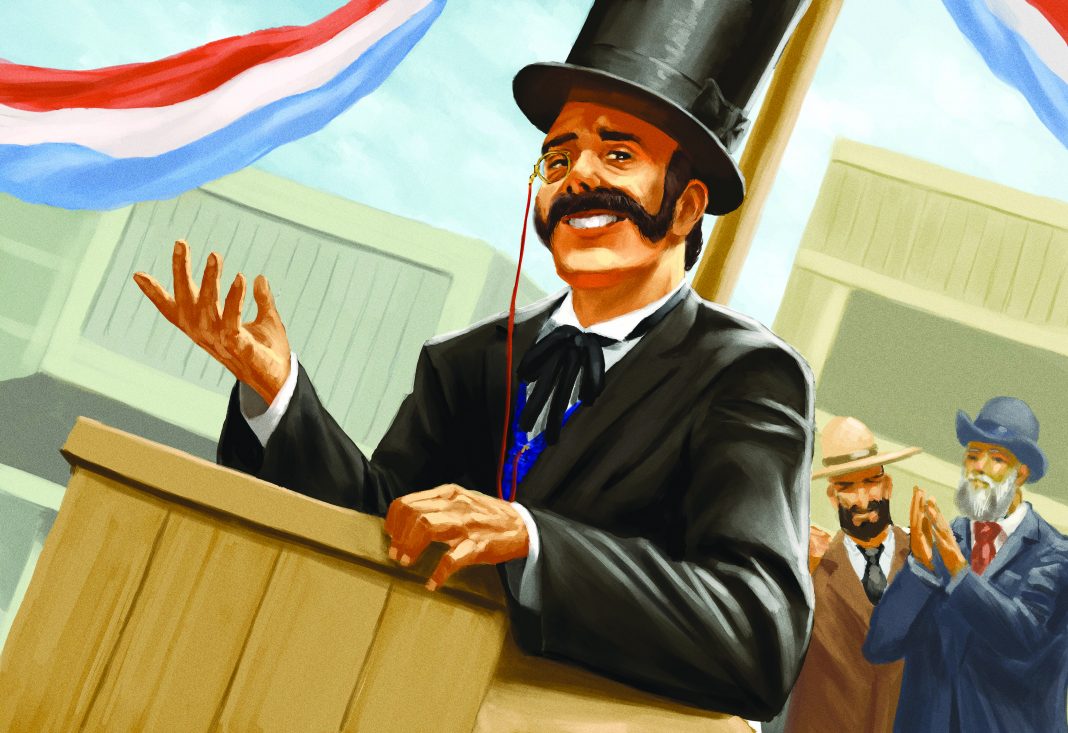 “… think it will be dangerous and likely … fixing this darn wagon wheel … neiiiiiiigh … bock, bock, bock, bock … and will you just look at this darling dress …”

Roderick Byre removed the helmet and slumped back in his chair, still reeling from getting bombarded all at once. Everyone’s and indeed everything’s thoughts were being revealed to him. It was almost too much for even his gifted mind to bear. Alone with his own once again, Roderick pondered some more and then resumed tweaking his device. First, he reduced the ghost rock by a third. Next, he sheathed several wires to eliminate crossover. Finally, he attenuated the dials that controlled the strength and direction of the received signals.

Sucking in a deep breath, Roderick once again placed the bulky helmet on his disheveled head. And waited. Nothing. Waited some more. Still nothing. Slowly, he turned his head.

“Ah for the luvva Pete, dang thing won’t work at all.”

With a start, Byre realized that the room was quiet. He was hearing the thoughts of Glen, his hard-working, but sometimes dimwitted technician. “Lubricate the bearings, make sure that the gaskets are sealed, and calibrate the intake manifold,” Roderick said to his assistant.

Glen did as instructed, and the machine purred to life. Glenn shot a quizzical look at his boss before resuming work on the device.

Brow furrowed in concentration, Roderick continued to sweep his head from side to side, picking up only faint static. Finally he sensed a stray thought. “Oh, Heavens to Betsy, she does WHAT?” Roderick thought to himself as he blushed furiously. He removed the helmet and recomposed himself.

“For science, I must persevere,” Roderick thought. Again, he adjusted and settled the telepathy helmet back on his head. This time he was better prepared to sift through the swirl of thoughts and emotions.

“ … the master will certainly be pleased … You’ll do well to remember where you’re sitting, Mr. Hamid … Just a few more adjustments … they’ll be back on the trail soon enough … that hombre is bad news for us all, why doesn’t she see it? … just ol’ Presswick sleepin’ off his whiskey … no one hears about this, Outlaw, or I’ll put ya down myself … how delightful, an election — this town’ll be mine soon enough …”

Roderick’s head paused in mid-swivel. “Hmmm, an election?” he said to himself. Slowly he turned his head counter-clockwise, but couldn’t regain that last thought. But others were discussing this election as well.

“There, let’s see what else I can learn,” Roderick muttered as he maintained his focus.

“Any other candidates runnin’?”

“Nope, Not yet. Who knows? Maybe you’ll be the only one who wants the job.”

Roderick Byre kicked back in his chair. “Certainly not, friend,” he mused, smiling a smile the length of his mutton chops. “I think a little competition is in order. After all, knowledge is power.”