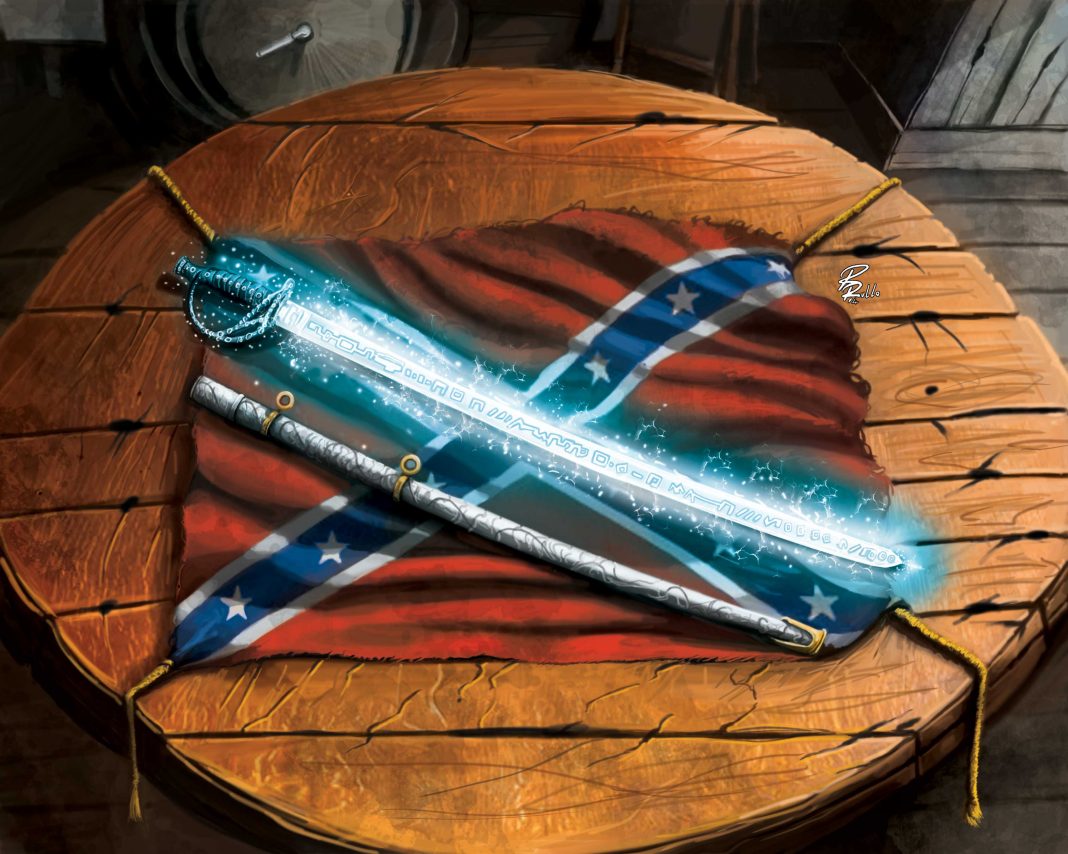 Yeah, I seen it,” Ulysses Marks slurred as he sat staring down at the bar of the Killer Bunnies Casino. There was a stain soaked into the rough wood, whose shape he was struggling to identify; he had narrowed it down to either a longhorn, a rattlesnake, or a cloud. Sitting before him at the bar was the last remnant of a glass of whiskey. Sitting next to him was one Dr. Richard Slavin.

“You’re sure?” Slavin asked, listening intently so as not to miss any of the drunken ramblings he was about to hear.

“Course I’m sure! That’s not somethin’ you see everday. Them markings are pretty unique, dontcha think?”

“Certainly. I don’t suppose you could tell me where you saw it?”

“Hell yeah, I could!” Marks shot back at Slavin, suddenly indignant, as if offended by some slight that occurred only in his foggy mind. Seeing no real challenge to his speaking ability, he calmed down and returned to his stain. “It was the early days here in town, back when I was workin’ for Morgan. Max Baine,” he spat, “was running a clean-up crew, tryin’ to clear away some land up the street there. Had no business askin’ me neither. I’m a cowboy, not some railcrew slave!” He paused to knock back the last of his drink as if out of spite. “Anyway, we was workin’ through some pile o’ rubble when he found it, still in its holster too. Decided to take himself a break to look at it for a spell. It was dirty an’ a little beat up, fer sure, but it was exactly what you described. I was right behind him, an’ I saw it.”

The old cowboy tried to take another swig of his drink, but was disappointed to find the glass empty. He stared down at the bottom of it, smacking his lips before turning to Slavin. “I’d love to tell ya, but the truth is I’m feelin’ a bit parched. Tale like that takes a lot outta a man.”

Richard smiled weakly as he called down the bar. “Clementine, dear. My friend here could use another.” The bartender made her way over, snatching a fresh bottle from the shelf as she did. Before she could pour, Slavin’s stool got knocked hard as someone ran past them. He turned just in time to see a couple of kids fleeing out to the street, strangely enough with a jackelope in tow. Clementine slammed the open bottle down on the bar, spilling some, as she ran after them, shouting. Marks just sat staring wide-eyed at the open bottle before him like a kid in a candy store. He grabbed the bottle by the neck and took a long swig before continuing.

“As I was saying, Max decided to call it a day after that and went back to the manor. He cleaned that ol’ thing up and hung it as decoration for Miss Lillian.”

Slavin considered the story for a moment. “Quite a tale, Marks. But that could have been anything. How do I know what you saw is what I’m looking for?”

“I’m tellin’ ya,” Marks was shouting now. “I seen that sword before. Baine dug it right outta the garbage and just hung it over the mantelpiece! I’m sure it’s up there now, on the second floor! Now git outta here and leave me be!”

Slavin pulled a coin from his pocket and left it on the bar for Clementine as he rose and walked away. There was planning to do. If what Marks said was true, he was going to need the circus’s help this time.