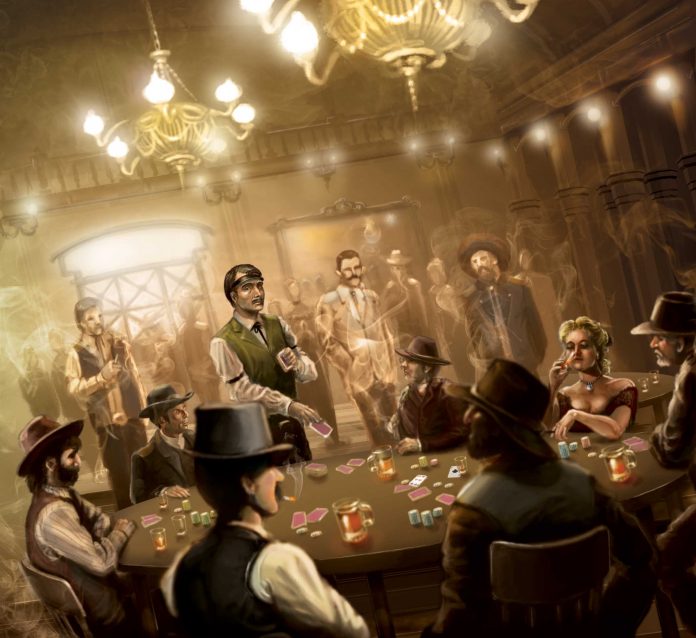 Raymond Calhoun whistled a jaunty tune as he left the Union Casino. His leather bag jingled in his waistcoat’s inner pocket, filled from a long, but lucrative, day at the faro tables. After years of getting taken by the cards, finally his luck had changed for the better. Time for some shuteye before continuing on to Sacramento in the morning, he thought with a spring in his step as he made his way back to the boarding house.

A burly figure suddenly emerged from the shadows and pinned Raymond against the wall. “Hand it over. All of it.” Fingers groped their futile way through his outer pockets.

“Never. I earned that money,” Raymond said, squirming to avoid his assailant’s search.

“Well, now it is my turn to — how’d you say it? — ‘earn my money’,” said the robber. He covered Raymond’s mouth with a gloved hand.

Hooves drummed the hard-packed dirt and stopped. Raymond heard the soft nickering blow of a horse pulled up short. As he looked over the robber’s shoulder, he saw a flash of red and then once again darkness.

“Unhand him at once,” spoke a soft, yet commanding voice. “Ahora.”

“And if I don’t?” the robber replied.

“Then you shall meet my trusted blade.”

“You can both scram. It’s not yer business. Besides, lead beats steel any day,” said the robber as he reached for his six-shooter.

The stranger’s weapon glinted in the dim gaslight. A quick flick nudged the robber’s hand upwards and away from the holstered gun. Twice more the robber attempted to draw his weapon, thwarted each time by the dancing blade. Frustrated, he whirled to grab his attacker. Flailing at nothingness, he lurched across the boardwalk.

Raymond felt the withers of a horse as its rider moved between him and his would-be assailant. The rider’s black cape swirled and vanished into the night, his horse’s red mane and tail blowing in the wind.

The robber continued groping for his pistol.

Leaning down, the stranger extended his blade to extract the gun by the trigger guard. With a deft flick, he tossed it aside. Raising his horse, he then brought it back down, hooves dancing in front of the robber’s face.

The robber scuttled backwards and then picked himself up and ran down the alleyway.

No longer held fast by his assailant, Raymond slumped down in exhausted relief. He looked up at his benefactor. “That was incredible, mister! Let me reward you for your help. To whom do I owe thanks?”

But once again, the night was silent and the street empty