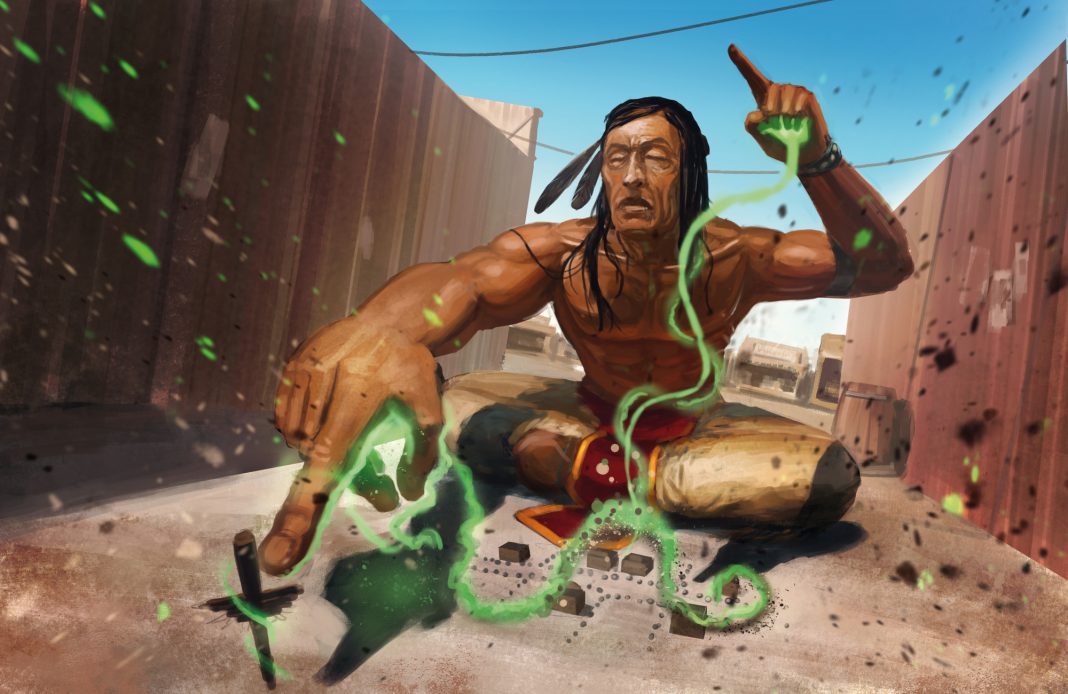 That was the only way to describe the screams that tore through the dusty air of Gomorra. They unnerved even the most resolute warrior, the kind that erupted from someone who had glimpsed a living nightmare.

Speaks-with-Earth and four others ran, quiet as shadows, to huddle behind the bunkhouse on the edge of town.

“Here.” The shaman knelt and shook out wooden blocks and pebbles from his knapsack. The smell of copper floated to them on the late-afternoon air.

“Better quicken your pace,” said Sarah Meoquanee, squinting from behind her warrior paint. She seemed like she was holding herself back from running as fast as she could toward those screams. “We gotta get out there.”

“Good idea, I’ll send her to scout,” whispered Three-Eyed Hawk. Her eyes flared the red of sunset and the enormous raven on her shoulder lifted its head, its eyes the same scarlet.

“We don’t have time for this,” Gene North Star added, tall and grim-faced as he stood watch at the corner. Another screech ripped through the air from some streets away and the intricate tattoos that covered his thick arms glowed for an instant.

Sarah shook her head and placed her hand on the tomahawk hanging from her belt. “Hold, brother. I agree, but we are few. Without his guidance, our work would be wasted.”

“I need dirt,” Speaks-with-Earth muttered, looking up at Smiling Frog. Frog rolled his eyes before kneeling down to help shovel dirt with his hands into small piles around the blocks.

“This better work,” he grumbled, an old bruise shining above his eye.

Speaks-with-Earth focused his attention to coax natural energy from the ground and into his blocks. A sensation of space and shapes formed and unrolled like a map in his mind. His hands, led by the energy, moved the last of the blocks into their right place, like pieces in a puzzle.

“What’s he doing?” someone asked but he ignored it.The world of men was sometimes as hard for spirits to glimpse as their world was to us; the slightest lapse in concentration from him and their map would collapse into confusion.

The energy tendrils—a vivid green that only he could see—clustered onto his makeshift map and showed him the sights that the spirits now relayed to him. He could see Chief Stephen moving rapidly across the map, on his own mission. Throughout the town, some folks struggled, others fled and a handful — Gomorra’s peacekeepers — fought valiantly. The blighted overran town square, but the spirits could sense further bubbles where evil readied to rupture.

“Gene, Hawk, go to the steepled church … there are children there,” Speaks-with-Earth commanded. “Sarah and Frog, to the bank where a center of this wickedness lies. Fast as you can.”

With that, his companions dashed off, Sarah and Gene shouting a warrior’s cries, Hawk calling to her animals, and Frog brandishing his club high.

The winds carry you quickly, Speaks-with-Earth thought and slumped against the building, waiting to regain his strength as the screams rose further.