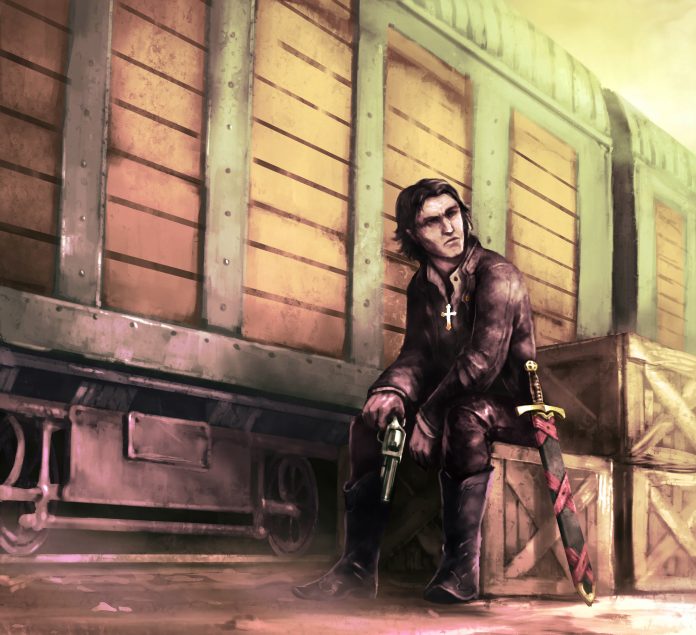 Abram Grothe was a man of faith, a man of God, a man of peace. In a fight, his first instinct was to end it without bloodshed. Even when he found himself trapped in Dodge City’s old rail station, set upon by a slavering figure from the shadows. He raised his gun and fired into the air over the figure’s shoulder, hoping to scare it off.

The figure’s hissing chuckle foretold no mirth. Abram took a step back, nearly tripping into a wall of dusty boxes, swallowed his fear, and squeezed off two shots at the shadowed man’s leg.

Still, it advanced. As it drew closer, Abram could make it out more clearly: something that may have once been a man but was no longer. Humanoid with greenish-grey skin, bloated and riddled with oozing sores. Its fingers became talons caked with dried blood. Its mouth held far too many teeth that were far too sharp, and it emanated a horrid stench, the stench of a butcher’s outhouse, that hit Abram’s face like a fist. Abram fought to keep from vomiting and fired his three remaining bullets into its chest, where he hoped its heart would be if such a creature still had one.

Its bloated flesh quivered, the creature stopped … but only for a second. “Aim’s failed you. Out of bullets,” it snorted. It licked a sliver of old meat from between its teeth. “Now you die.”

Abram turned and ran. Thousands of crates here had been laid out like a maze; undoubtedly the creature had set it up as a hunting ground. There’d be no way out that it didn’t know about. It probably planned to let him run around and tire out before closing in for the kill. Abram frantically tore into the crates around him, throwing rotting planks, bags of undelivered mail, everything he could into the path behind him in the hope of tripping up the creature’s pursuit. It wasn’t much, he thought, but if he could get behind it somehow, find an opening when it tripped or went around a corner, he could –

That was when he saw it.

The box he’d just torn open held a sword. Even with his heart pounding in his ears and the lingering stench driving bile up his throat, he had to stop a moment in sheer awe. These rotting crates, stuffed with mouldering newspapers, had been here for years, yet the blade was as bright as if it had just been polished. Gingerly, he reached in and grasped it by the pommel. Light enough to swing, heavy enough to hurt, it seemed perfectly balanced in his grip. He glanced at the address printed on the crate, the person to whom this blade had originally been shipped.

“To Whom It May Concern.”

The Lord may work in mysterious ways, thought Abram, but sometimes He favors a more direct approach.