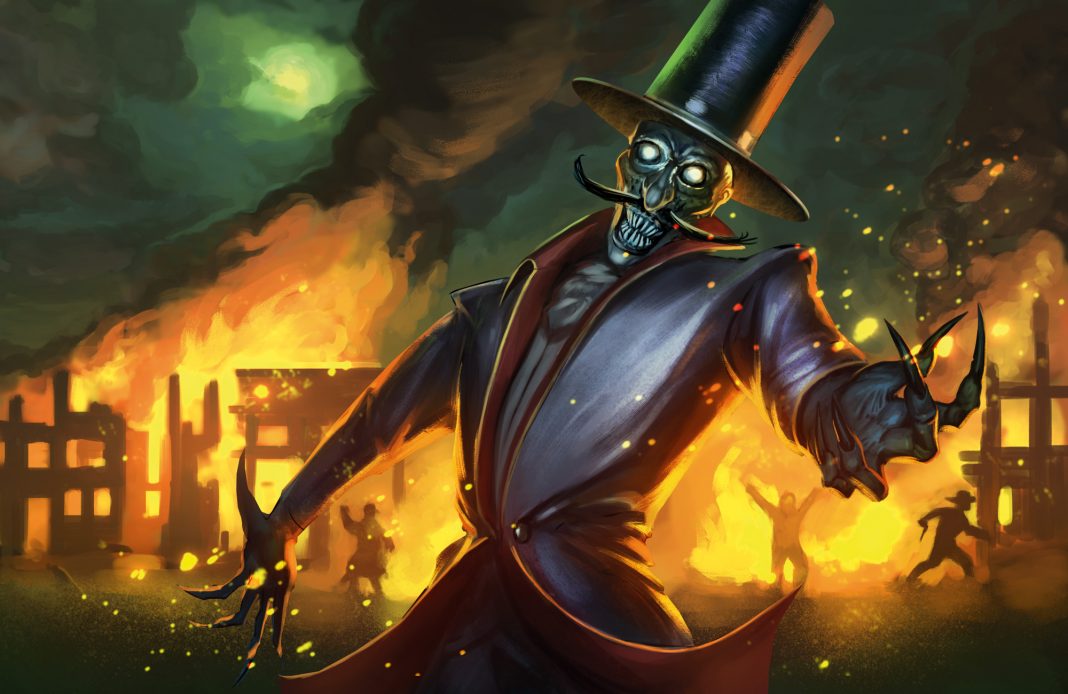 The sky was choked out by thick, oily black smoke, highlighted in brilliant orange by rising flame. All around were the wails of burning Ghost Rock and the incoherent gibbering of the blighted as they rampaged hither and yon. The town’s living were now holed up in the safest places they could find, hoping for a miracle to save them before they were claimed by the infected or the flames.

Even Nicodemus Whateley was hoping for divine intervention. Ivor could see it in the man’s haggard, desperate face gazing down at him from the second-story window of the mayor’s office as the blighted worked to tear down the door keeping them from him. Although Ivor doubted that slimy warlock was praying to the same God as everyone else, the answer would be the same.

“Well, he was right,” Ivor thought. “We certainly did bump into each other again.” He paused to smile at Whateley, removing his top hat and bowing low, as if accepting the thunderous applause of an unseen audience. He rose again to wave his hands  dramatically at the burning carnage all around, displaying his handiwork, demanding another look at the chaos. He returned to stare at Nicodemus again, asking in his head, “Isn’t it wonderful?”

“The best monster with the best family won,” the monstrous ringmaster thought as he flourished his top hat back onto his head. He turned his back to the mayor, satisfied that the army of infected would get to him in time.

“It was fun for a spell, pulling the wool down over these fools,” he thought as he surveyed the scene once more. “But this feels much more like home. As a matter of fact, it reminds me of a song …” He spun his cane, grabbed it with both hands, and began to bob back and forth to the beat.

Andrew Burton screamed in vain as three of the Blighted caught up with him, dragging him to the ground, clawing at his face and arms while screaming incoherently.

Pearly’s Palace erupted into a fireball the moment the flames reached the basement moonshine stash. Pearly and Genesee Gina tried to tear apart the barricades they erected and escape, but the smoke would overwhelm them.

“… The wand’rer thinks of those he loves, but tho’ dear friends must part …”

Two rough mining folk ran as fast as they could past Ivor. He casually hooked the foot of one with his cane, sending him crashing to the ground as he grabbed the other by the throat and lifted him high. The victim began to cough and choke as black veins spread from the place where Ivor’s hand touched his skin, transforming him into one of the rabid, blighted figures in a few moments before dropping him and watching with glee as he ripped his fallen friend apart in a frenzy. No escape.