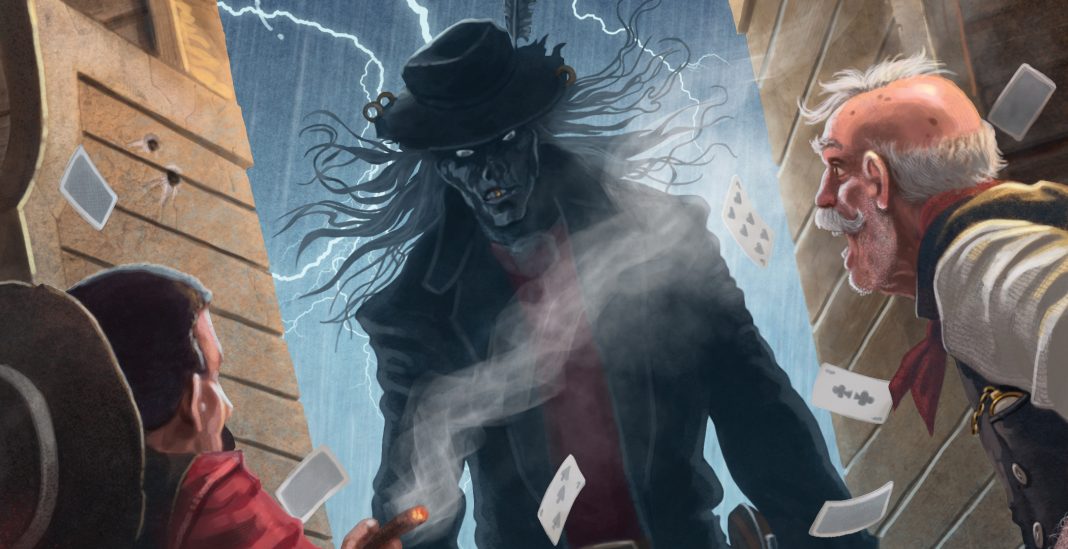 Lacy O’Malley read and reread the crumpled telegraph at least a dozen times over. In the past month alone there were close to thirteen killings of Explorer’s Society members all over the southwest. Now they could also carve in granite the names of “Bad Luck” Betty McGrew and “Velvet” Van Helter. The reporter sipped the last of his lukewarm beer and pushed the empty mug across the scratched felt of the well-used card table. Without the distraction of his beverage, Lacy found himself falling into a well of conspiracies and hunches spawned by his writer’s mind. It was not the deaths themselves that had the reporter’s head spinning like the end of a lasso, but the fact that Ronan Lynch was due to stand trial for the killings. Something about the story left Lacy with the feeling of hot lead burning in his gut.

The sound of boots and spurs on creaky floorboards drew the reporter from his thoughts. Lacy turned and saw a couple of women sporting tin stars approaching his table. He managed a cordial smile and adopted an approachable demeanor. The law women’s unhurried pace hinted at an unofficial capacity, not that Lacy knew of any reason he should see himself clamped in irons in the near future.

“Yes,” said Lacy. Though his curiosity was racing as fast as a Kentucky thoroughbred, he remained as composed and cool as a block of ice.

The other law woman with dark and exotic features stepped forward and spoke. “I’m Wendy Cheng and this is Virginia Earp. We heard you were in Tombstone and you’ve been covering the shootings of Explorer’s Society members.”

“You ladies looking for an autograph or something?” asked Lacy. The abrupt statement made it more difficult for the reporter to maintain his calm.

Wendy and Virginia shared a grin and soft chuckle. “No, but we’ve been reading between the lines of your stories so to speak,” said the red-haired law woman. She continued, “You don’t seem to buy that it’s been Ronan Lynch doing the shooting.”

“Well I didn’t print it directly but like you say, read between the lines,” said Lacy.

“So you have a thought on who is behind it all?” asked Wendy.

Lacy wondered if she had a reason to lie or otherwise conceal her motives but his nose told him that he could trust the pair of women in front of him. “Jasper Stone,” he said low enough that only the three of them could hear that terrible name.

“We are of like mind on that thought,” said Wendy in a furtive whisper.

“Got word about a shooting this morning outside of town. Ol’ Geronimo and some of his boys got in a bloody one,” said Virginia.

Lacy retrieved his mug from across the table and raised it to take a drink, before he remembered that it was empty. “Yeah, the way the killings have gone, it seemed like Tombstone was the next place to have a body turn up. Didn’t think that our man had the grit to run at Geronimo head on.”

“When it comes to…him…there is nothing he won’t do. However he’s been getting bolder these days,” said Wendy.

“That’s for sure,” Lacy said. He looked at his empty mug and figured the news of the day warranted a fresh round even though he had promised himself that one drink before noon was his limit. “I got to ask though, what’s all this got to do with me? Why are we talking now?” he asked. The reporter signaled to the bartender to refill the mug.

“We figured that we ain’t the only ones who can read between the lines. Your stories on the shooting spree are starting to get a whole lot of attention. Let’s just say that if I were…him…then not having a reporter telling the whole of the territory what I was doing would make it a lot easier,” said Virginia.

Lacy tried to swallow but it felt like a cannonball had lodged in the back of his throat. His line of work had seen him cross paths with danger on occasion but never once had the danger been centered on himself. It seemed as if he could feel Jasper Stone’s hands closing around his neck right now. “Um, so what do you ladies have in mind?” asked Lacy.

“If there is even a chance he’s got his sights on you, Tombstone is not where you want to be. We’d like to help move you to Tucson where it should be safer,” said Wendy.

Lacy finally managed to clear the lump in his throat with a swallow that seemed to split him apart from gullet to belly. He called over to the bartender as he finished refilling Lacy’s mug. “Could you make that two more for my new friends here.”

The Bayou Vermillion train pumped over the cracked ties and split earth as the setting sun surrendered to the encroaching dusk. Lacy, Wendy and Virginia all sat in a troubled silence as the train descended from Tombstone into the Avra valley that sheltered Tucson. The otherwise empty passenger car gave some comfort to the trio of travelers. Only the clack and chug of the train in motion offered a muted counterpoint to the otherwise eerie silence.

“We ought to be in Tucson before midnight,” said Virginia. The words were the first spoken since departing Tombstone.

Lacy and Wendy did not verbally respond. The attempt at small talk was swept up and consumed by the endless desert that spread far and wide away from the locomotive track. A few sips from a flask here or there and the odd checking of a timepiece were the rare occasions that marked the quiet ride. There were moments when someone seemed like they might make an attempt at conversation but inevitably each moment passed without any actual spoken utterances.

The screech of metal on metal that finally ended the tomblike atmosphere pervading the train. Lacy nearly fell  from his seat as the train came to a halt. Wendy and Virginia grabbed for the guard rails of the overhead luggage racks to keep themselves from hitting the floor. The iron beast slowed and finally came to a full stop on the back of a trestle bridge that traversed a swift flowing river.

“Why’d we stop?” asked Lacy. He peered out the windows of the train as if to seek some answer,  but endless dust, the hiss of steam venting from the engine, and the rush of river water were the only things that answered his query.

“It could be a problem with the engine, but I don’t think we are that lucky,” said Virginia. She cautiously pulled her Winchester repeater from the luggage rack overhead, but kept the long gun holstered.

The train car suddenly went cold. The Arizona heat became chilled not unlike a darkened crypt. The wind carried the scent of rot and decay. Three sets of eyes turned to anticipate the sound of the forward door swinging open and regard the harrowing silhouette that stepped into the car to join them.

“You folks are not that lucky indeed,” said Jasper Stone. The Deathly Drifter cracked a wicked joker’s smile on his leathery shriveled lips. His fingers traced the grips of his Colt Dragoons with a playful malevolence. “I came to silence you. Them stories you are printing are a thorn in my side,” he said. Jasper’s eyes cut a rattlesnake glare at the reporter. He took a beat to regard both of Lacy’s companions. “I was fixing to just handle him tonight, but I’m happy to cross some more names off my list at the same time. You ladies ought to be honored.”

“Back of the car now,” Wendy said to Lacy. She pulled her double barrel from where she had slung it over the back of the seat and wasted no time unloading two rounds of buckshot right into Stone’s abdomen.

After the thunder of Wendy’s volley dissipated, the raspy cackle of Jasper’s laughter overtook the car. He ominously approached the trio as dust and ash spilled from the bloodless holes punched in his unliving flesh. “You and I been missing each other for a long while. I want to look you in the eyes point blank when I do it,” he said. Jasper looked at Wendy with a palpable mix of rage and joyous anticipation.

“Move it back,” Virginia said. She drew and started to fire her Winchester while Wendy reloaded her shotgun.

Lacy made for the rear of the car and moved on to the next. The pair of law women continued to unload hot lead into the cold dead hide of Jasper Stone as he closed in on them. The women put up a valiant fighting retreat through the train, covering Lacy’s retreat as well as making every effort to avoid hitting any of the frightened men, women, and children cowered in their seats.

“We’ve run out of train?” asked Lacy. He nervously wiped sweat from his brow as Wendy and Virginia joined him on the rear deck of the caboose.

“Can’t take our chances with the desert and we ain’t got the guns to fight him now,” said Virginia.

“Only one option then,” said Wendy.

“Close your eyes and hold your breath,” Wendy said.

The reporter’s answer came in the form of a shove from the dark haired law woman. Lacy fell from the trestle and plummeted into the speeding water of the river below with Wendy and Virginia following suit right behind him. The deranged sound of Jasper Stone’s laughter followed the trio as the river swept them away.

“At least we made it to Tucson,” said Virginia. She shifted in her still damp boots as the group walked into the bunkhouse.

“We picked a good river to dive into. Got us here faster than the train,” said Lacy.

“Faster maybe but certainly not dryer,” Wendy said. She removed her hat and twisted her long black hair. A few lingering drops of water fell to the floor as she continued her battle against the earlier soaking.

“I’ll take wet and alive over dead and dry. We are lucky that river didn’t kill us,” said the reporter. He regarded the damage for the first time since the group’s daring escape from the train. He needed some warm water and wraps for the motley collage of cuts, scrapes, and bruises covering his body from head to toe.

“This will do for tonight, but come daybreak we are going to need to find some more permanent accommodations,” said Lacy.

“Of course,” said Wendy. She sat on her chosen bed and let out audible relief as she put her feet up. “We can check with the local law tomorrow. They can help us disappear for a bit.

“You know he will find us again,” said Virginia. She hung her jacket from her bunk post and slid off her suspenders before laying her head down.

“Hopefully we can get what we need so we can be the ones who are doing the looking,” said Wendy. She gave one last glance around the room before she pulled the covers up around her. “Anyways best not to talk too much more about it now. He’s got eyes everywhere.”

The conversation drifted off as each of them let sleep come and find them along with the hopes that their respite from Jasper Stone remained longer rather than shorter.