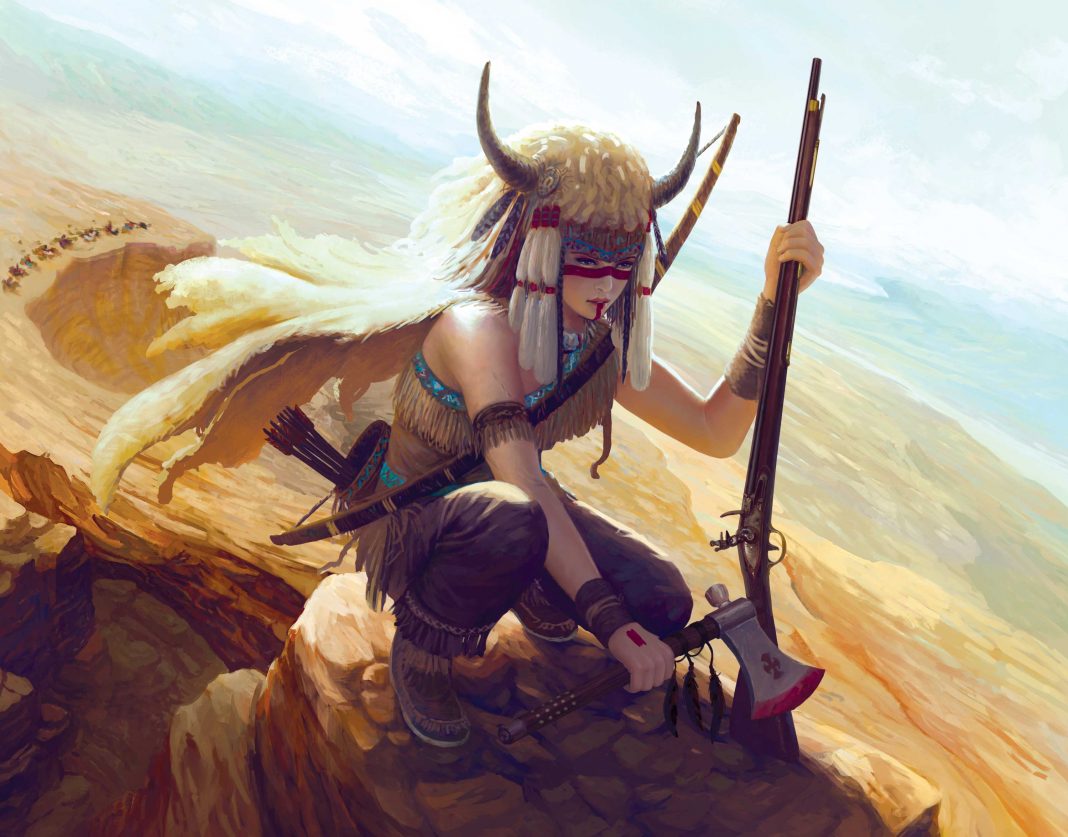 Sarah Meoquanee crouched at a ridge at the top of the maze. She’d first scouted these parts for the Union Army a while back, and now she traveled in advance for her new tribe, her new home. Chief Seven Eagles had moved the tribe to a town called Gomorra. A simple idea in theory, but as war chief, she was the one he trusted to know the area better than anyone else, especially its dangers.

Fortunately, those were Sarah’s specialties. She shielded her eyes from the sun, gazing down a steep, rocky cliff to the water. To the right, a thinly-carved makeshift horse trail wound its way down to a landing near the waves below.

Her keen eyes scanned passed the immediate scenery. Off in the distance, a pair of men trudged forward, carrying what appeared to be a heavy load of bags. They shouldn’t be so close to the water. Danger lurked everywhere.

As if sensing her thoughts, the water beyond churned. A normal person may have thought it merely the sun reflecting oddly on the water below, but Sarah saw the glint of blue scales undulate above and back below the surface.

The travelers below caught the sight too late. The maze dragon’s head jutted from the water, an ear piercing howl echoing through the canyon. Its gaping maw snapped closed on one of the traveler’s torso. The dragon lifted its head, shaking as it dragged the entire man down into the deep. The other traveler ran.

“Get away from the water, you idiot!” Sarah took off with unnatural speed down the ridge’s thin path. One slip and she would fall into the chasm. But Sarah knew no fear, only courage and the rushing wind.

While she moved, Sarah reached to her back to pull an arrow from her quiver. Aiming by instinct, she unleashed a succession of arrows. She lowered her bow as she reached the chasm floor and slid to a stop.

All of her arrows had hit their marks, several throughout the Maze Dragon’s long neck, one near its skull and another directly in its eye. It howled again, this time so loudly it made Sarah’s ears ring. The beast once more descended into the depths of the Maze.

The traveler rushed to Sarah, eyes wide with fear. “My brother! That thing …” Tears filled his eyes as he trembled in shock.

“Look, we gotta get a move on before that thing comes back. I don’t know about you, but I don’t feel like being dragon meal today,” Sarah said. She inclined her head, her braids and headdress casting a shadow over the traveler.

“Who are you? I owe you my life,” the traveler said.

Sarah laughed. “You don’t owe me anything ‘cept two things. Be more careful and spread the word of peace. We all are gonna have to change if we’re gonna survive in this new world,” she said, picking up her bow. She turned back toward the steep path.