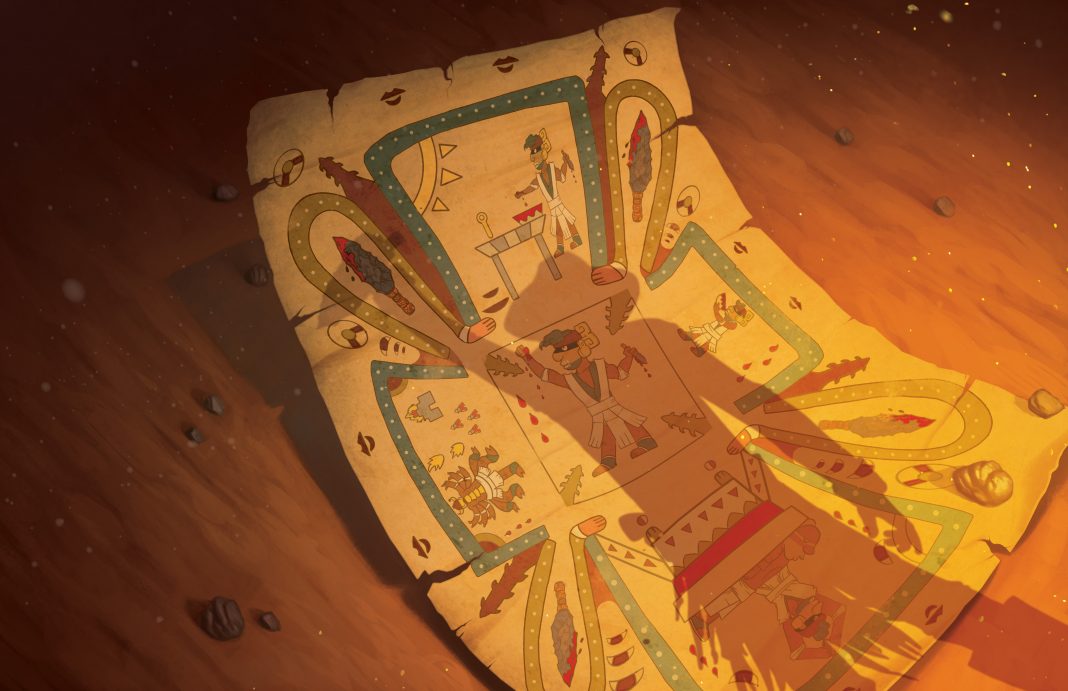 The iron case, covered in a fine layer of dirt, rested on Nicodemus Whateley’s otherwise pristine desk. The orange rays of the setting sun shot through his office window and bathed the case in a soft glow.

That silly little gang finally brought him something worthwhile.

Nicodemus spun a playing card on the tip of his index finger to relax his mind. His other hand ran along the box, tracing its intricate markings. A sense of power, almost like a smell he could not get enough of, emanated from beneath the lid.

“Let’s see what tantalizing secrets you might hold, shall we?” Nicodemus said, flicking open the container.

Knives, four daggers to be precise, carved from a black stone. They appeared simple enough, but Nicodemus’s particular senses felt an unknown magic pulsing within. He weighed one in his hand, turning the gleaming obsidian blade over, when something else caught his eye.

An old scroll lay wedged behind the daggers, almost like an afterthought.

He unfurled it and smoothed down crinkled edges that barely stood the test of time. Images and words in some sort of ancient native script spread across the heavy bark paper. When he touched one of the drawings of the daggers, a buzz of power shot into his fingertips and hummed through his blood. The peculiar sensation caused his other hand to drop his playing card. The Jack of Spades landed face up, grinning at him.

Nicodemus reveled in dark magic, but he had not felt magic with this weight, this gravity, in a long time. An unconscious bray of pleasure escaped him, prompting the crow perched outside his window to fly off toward the sinking sun.

The scroll depicted figures engaged in disturbing scenes of ritual and sacrifice, slaying in the name of some pagan god. Nicodemus’ gaze followed sketches of blood running in droplets, pouring from bowls, and finally coating the daggers. The scroll, he mused, was not an instruction on how to summon a powerful god, but rather a guide for taking that power for oneself.

This could change everything.

He imagined using this new magic — once he deciphered the scroll, of course — to take care of all the annoyances threatening the security of his position in Gomorra, in particular those distrustful Law Dogs,Wendy Cheng and Abram Grothe. He chuckled to himself as he pictured unleashing the daggers’ dark abilities and watching the residents of Gomorra bow to him. They would be helpless before him, little more than his possessions.

Being mayor of Gomorra was only the beginning.

Nicodemus closed the box, a smile tugging at his lips.

Maybe it was time to show the people of this town what real power looked like.