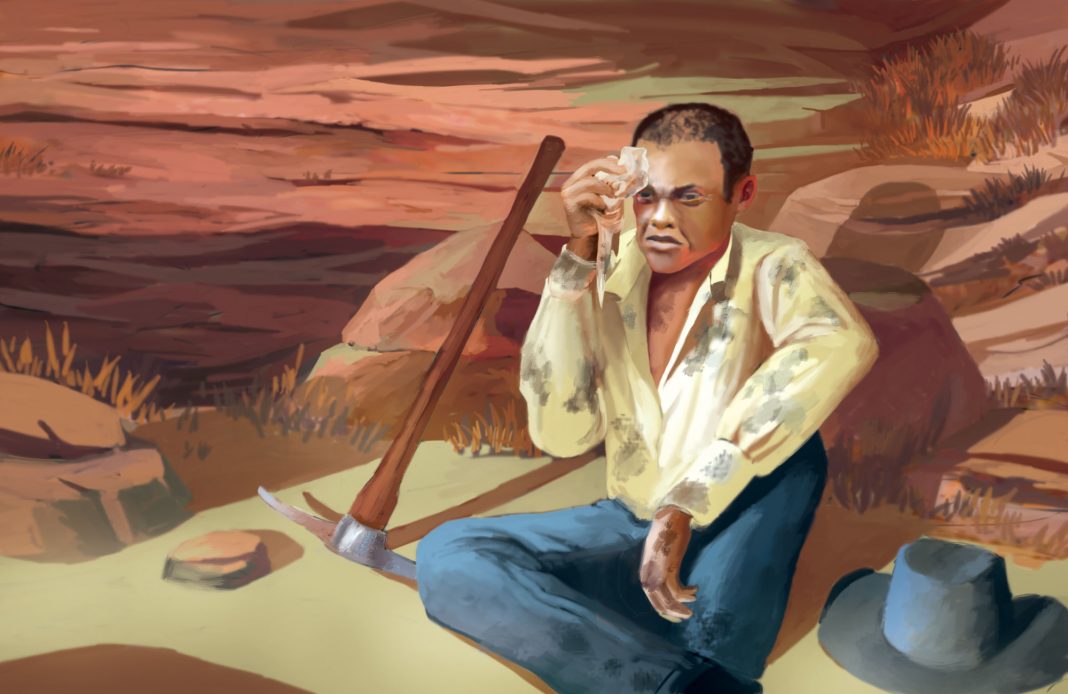 The door to the Gomorra sheriff’s office squeaked in protest as it swung inward. The splintered piece of wood hung precariously from its hinges as it had yet to be properly repaired since the latest bout of anarchy that had befallen the town. Warren Graves stepped into the office, tentatively shutting the door behind him.

“I’ve been meaning to get that fixed, but something else always comes up. Don’t worry though, it’s sturdy enough,” said Sheriff Jack “Black Jack” Jackson. He rose from his seat behind the office desk. “What can I do for you?”

“Sheriff, the name is Warren Graves.” He met Jackson’s extended hand with his own gnarled mitt.

Warren grinned as he nodded in affirmation. “Yes sir, the very same,” he said.

“You looking to collect on a bounty then?” the sheriff asked. He turned to his desk and started riffling through a haphazard stack of wanted posters cluttering the workspace.

Warren gave a small chuckle and almost looked bashful. “Well I’m always looking to collect on a bounty but no, not today. At least not directly,” he said as his eyes glanced up and to the left.

Jackson folded his arms and leaned on the corner of the desk, scattering a few of those posters.“Go on then, what’s the story?” he asked.

“After bringing down that feller known as the Ghostly Gun, I had my hands full for a spell. But it’s been quiet for a while and time for Shane and Graves to get back to business as usual,” Warren said. “We’re putting together a posse and fixing to head out towards Tucson. I heard tell some Sloane boys ended up thataways and fixin’ to cause some trouble. Figured you might want a piece of the action, or needed to know what’s what at the very least,” Warren said.

Jackson pondered for a quiet minute. He looked to Warren and then down to the scratched and dented tin star pinned onto his dark leather vest. He ran his thumb over each letter carved into the well-worn metal. “That’s a lot to consider. First off, I do appreciate you telling me the score. You know I’d love to go and settle up with any one that’s still got the gumption to wear a red bandana, but…” He continued to tap the sheriff’s star on his chest.

Warren interjected before Jackson could resume speaking. “I get it. You got your obligations here in town. Honestly I hated to even ask, only we was going to be a little short-handed on the trail. I would have loved to have Lane Healey ride with us. Goodness knows he can ride and shoot better than most, but he’s already mixed up in some business going after Jonah Essex…”

“Obligations is one way to say it. Gomorra is barely holding together by a thread. This town has been through so much in the last couple o’ years. She’s already seen more sheriffs come and go than any other town in the territory. Then there is the fact that we still don’t have a proper mayor. As far as leadership in this town goes, Harry Highbinder has been making some plays. Truth be told, between you and me, he’s about as effective at running things as ol’ Pedro out there,” Jackson said. A roll of his eyes and shake of his head as he indicated a broken down looking donkey hitched in front of the general store. “Anyways I can’t rightly leave the good folks of this town. For most of ‘em, I’m the only thing standing between them and this ongoing madness.”

Warren took his time drawing in a deep breath and then let it out just as slowly. “On the one hand, I can’t fault you for not wanting to run out on the folks here. I can see that you’ll do that star right,” he said. “On the other, I ain’t too thrilled about lightin’ a shuck for Tucson with the handful of fellers that I got with me. Fine boys, all of ‘em, don’t get me wrong. But they ain’t the likes of you. Even if they are just a few holdouts we’re riding down, Sloaners don’t go easy.”

“No they don’t but maybe you getting out of town for a bit might be the safest thing for you and yer posse,” said the sheriff. He squinted his eyes almost like he was looking through the bounty hunter who was standing right in front of him.

“How do you figure that?” asked Warren.

“I got myself some danger that is pretty close to home as it is. Not sayin’ you have an easy trail ahead of you, but what I got coming, well there ain’t the words,” said Jackson.

“Really you got something worse than takin’ down a pack full of red bandanas?” said Warren.

“Indeed I do,” responded Jackson. He pointed a finger out the window in the direction of the general store once again. This time he denoted the form of a bedraggled but oddly vigorous prospector emerging from the store, laden with provisions, bags and other assorted parcels. “I got my lot tied up with ol’ Coot Jenkins and we got ourselves a trip out to Whateley Isle. I’m trying to scrounge up a posse of my own.”

“Nicodemus?” asked Warren with a hushed reverence in his words as a somber expression darkened his face.

Jackson nodded as he cleared his throat. “I hate to say it, but we’re gonna need the likes of him if we aim to survive the fresh Hell that’s broken loose all over.”

Warren was silent for a long span Warren extended his hand. “God be with you. You’re gonna need His help.”

Jackson shook Warren’s hand. “And with you as well.” He watched the bounty hunter leave the sheriff’s office through the splintered door.