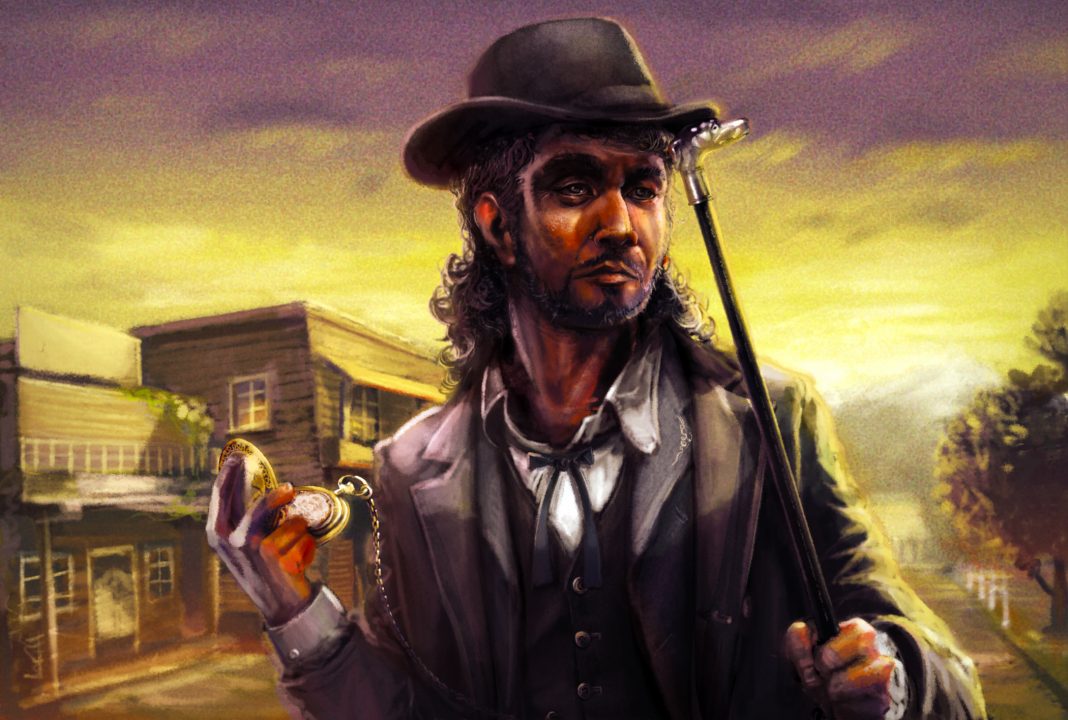 Nighttime on Gomorra’s outskirts was never completely silent. Somewhere a nameless critter howled or squawked at the moon. Occasionally a lonesome traveler whistled to themselves on the road leading towards Sacramento, and every so often gunfire punctuated the night. Tonight a low rumble disturbed the calm of the dusty little town. An innocuous patch of cracked earth opened up like a sinkhole. Out of the darkened pit burst a set of railroad tracks supporting a full sized locomotive trailing five cars behind it. The brief, shrill cry of a steam whistle announced the train’s arrival to Gomorra,.

Coot Jenkins’ aged and bent form emerged from the frontmost passenger car. The haggard prospector put his floppy hat back on his head and turned back to marvel at the wondrous feat of mystical engineering that had just delivered him to Gomorra. He barely had time to blink before the train vanished once more beneath the earthen surface.

A dry voice broke the silence. “They said you’d be showing up here but I didn’t know you’d be making such a grand ol’ entrance.”

Coot pulled his lantern from his rucksack and stuck a match to light it. He then turned to look in the direction of the speaker. His rheumy eyes adjusted to the glow, pushing back the night as he recognized the face of Samantha “Sammy” Cooke looking back at him. “Professor True whipped up something mighty fine for them Twilight fellers. They was nice enough to let me hitch a ride.”

“I don’t know if we can pull this off but seeing that alone made tonight worth it. We got a bunk for you set up. You ready?” Sammy said.

“Yes’um,” Responded Coot. No sooner had he spoken than Sammy had already hoisted the prospector up onto the back of her horse. Coot could only hold on as Sammy spurred the lean palomino back towards Gomorra.

After an hour of hard riding, Sammy reined in her mount at the back of Cooke’s Nightcap, hitching it to an available post. She helped Coot down and let the clearly inexperienced rider sort himself out with a good bout of coughing that hacked up a lungful of trail dust.

Coot wiped his face with a threadbare handkerchief. “God almighty! I thought that train was fast,” he said.

Sammy grinned in response before going to the saloon’s back door and giving two quick knocks followed by a pause and then three more quick knocks. The door opened and they went inside.

Forster Cooke offered Coot a chair at the saloon’s back table. “Blazes, I figgered you’d show up all tuckered out from that mess back East, but you look like you’ve been chewed up and spit out by a dread wolf pack,” he said. The barman then nodded to Asakichi who wiped a glass and filled it from a taphead before handing it to Coot.

“Well if this gal here wouldn’t have rode like a bat out of Hell…” Coot cast a good-natured frown at Sammy. He tipped his hat to Asakichi and took a sip. “You ain’t wrong about back East, God awful mess of it. Anyways I’m thankful for y’all helping us. You’re doing a lot of good for a lot of people.”

“What choice do we have? The good ones this side of the grave are getting fewer by the day. We all have to stick together,” said Asakichi. She poured a glass for Sammy and Forster before serving herself. The four shared a moment’s peace.

“Ain’t that the truth? The varmints and bandits out there are going to bring about the Reckoning the good book talks about if decent folk don’t stop them,” said Coot.

“Not too many decent folk left back East, I hear. Not after the the Twilight Legion lost ol’ Hank Ketchum. That was one feller that was pulling more than his fair share of the peacekeeping out that a way,” Forster said. He proceeded to empty his glass. Wiping his brow with a heavy hand, he then went to a cabinet, pulled a bottle out from inside and uncorked it. Forster drank straight from the bottle and shook his head as the potent libations inside worked their way down his throat. “Not too many decent folk left here in Gomorra either,” he said before taking a second swig from the bottle.

“Well I can tell you there’s probably a good lot more here than back where I come from. Ain’t just Hank, most of the law there have punched a one-way ticket to boot hill. I mean y’all been through Hell and back here in Gomorra. You got to have some dudes with sand in their bones and grit in their craw still kicking about? And even if you don’t have em’ this side of the grave, I got somethin’ for that too,” Coot said. He withdrew a polished wooden box from his rucksack and gave it a pat.

Asakichi gently touched Coot on his forearm and caught his gaze. “We do. In fact I have one such person in mind. I can take you to meet him in the morning,” she said.

“Well one ain’t much, but it’s a start,” said Coot. He motioned to Forster to pass him the bottle before the bartender drank it dry.

Morning came and Coot bid riddance to another sleepless night. The bed that the Cookes had provided for him was modest, but infinitely more comfortable then the hard earth and bedroll that he was accustomed to sleeping on. Despite his weariness, his troubled mind kept him from dozing for more than a few moments at a time. The scrambled eggs and strong black coffee that Asakichi had whipped up at sunrise were an appreciable consolation for the restless night spent at Cooke’s Nightcap.

Coot nodded his approval when he saw Asakichi bring a buckboard around. Wherever they were going, at least this morning’s journey would be more comfortable than last night’s bone-crunching ride.

“This is it,” Asakichi said as she pulled on the reins of the horse leading the wagon. She climbed down and hitched the horse to a scraggly oak tree. “I’ll take you in to meet him now,” she said.

Coot huffed as he took in the sight of the rickety little shack and other odds and ends that were strewn about the derelict mining site. He noted a dust-covered sign with the hand scrawled text, Pat’s Perch. “Sure don’t look like much,” he said. He clambered down from the wagon and fell in behind Asakichi.

“That’s exactly why it’s a good place to hide out,” Asakichi said. She went to the shack’s only door with Coot on her heels. She knocked once. “It’s me. I’ve got someone here who can help,” she said. Asakichi opened the door without waiting for a response and motioned for Coot to follow her inside.

Coot stepped into the shack and choked on the taste of death hanging in the air. He watched as his guide went to the bed nestled along the structure’s far wall. He saw her look down at the sunken and emaciated husk of a man lying in a pile of soiled and blood-stained blankets. Coot took the man for long dead when the almost skeletal figure turned and looked him in the eyes. The prospector took a defensive half step back as he stared back at the two beady little black dots that bore into him like an auger drilling for oil.

“Coot is a friend. It will be alright,” Asakishi said with a heavenly inflection that helped to lift the morose atmosphere pervading the shack. She motioned for the prospector to approach the bed, her kind expression easing Coot’s wary trepidations.

Coot moved over to the bed and looked over the frail man. He would have sworn that he had seen week old corpses that had more vigor than the poor malnourished soul he saw before him. He took his hat from his head and used it to obscure his mouth from the man as he whispered to Asakichi. “You spoke pretty highly of this feller here, but looks like he ain’t got much time left in him. Let alone the grit to go after outlaws their ilk,” he said.

Asakichi said nothing but offered a beatific smile as Rafi Hamid sat up in the bed and spoke with a voice that had the fire to turn a full cavalry regiment into hasty retreat.

“I’ve got plenty left in me and then some. I’ve been dead once now and I don’t care to go back again,” Rafi said. He fell back amid some grunts and groans. He commenced poking and prodding at the numerous bandages that covered his torso.

“I told you Rafi was just the sort you are looking for,” Asakichi said..

“Well I’ll be. Ma’am I would say you are right about that,” Coot said. He pulled the polished wooden box from his rucksack. Turning to Rafi, he knelt down beside the shoddy bed where the other man was recovering. “You sure you is up for what’s coming. I got something with me that will ensure you’re able to stay on the side of the living, but you should know that once you take it you ain’t never gonna be the same again.”

Rafi half propped himself up on one scrawny elbow. “I think the sun has set on that one already. I’ve never backed down from a fight, and what I hear is that there are good folks in need. I just want to help,” he said.

Coot looked to Asakchi and then back to Rafi. He pulled a bottle filled with a thick black liquid from the box “I’m gonna need ya to drink this. Best ya don’t ask what’s in it,” he said. Coot let Rafi take the bottle and waited for the man to down the repugnant contents. The prospector snorted in amazement as the sick man imbibed the black substance in one swift gulp as if it were a shot of top shelf Tennessee whiskey. A few heartbeats passed as Coot and Asakichi waited while Rafi once again laid back in the bed.

“How you feeling there, son?” Coot asked.

Rafi’s eyes flickered with a wild primal energy. “I feel like a new man,” Rafi said.

“Son, you don’t even know half of the truth in that statement. You rest up quick. We got a whole world of trouble ahead of us,” said Coot Jenkins. He finished with a hacking wheeze of a laugh and a gummy smile.