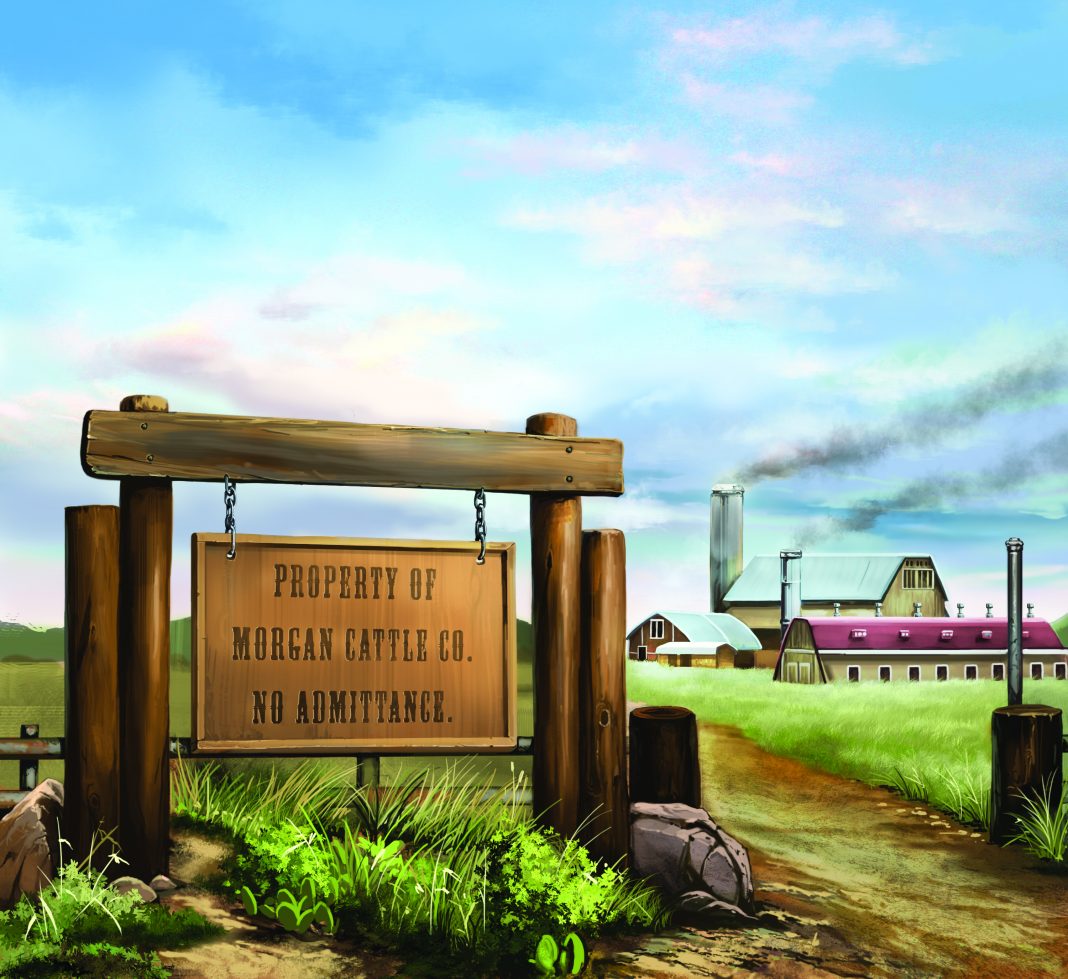 “I wasn’t expecting to come out this way at all today, Kyle,” Lillian Morgan stated, somewhat annoyed. “But the message said that it was urgent. Let’s just say I certainly hope that it is.”

“Yes, ma’am,” the young scientist said with some degree of nervous excitement. “Thank you so much for coming. I know the R&D Ranch is out of your way.” He grabbed some papers from a nearby workbench and began to walk into the next room. “Please follow me.”

The two of them walked into a large examination room. Various gadgets and tools extended from the walls and ceiling on rickety, telescoping arms, resembling a spider that had been turned inside out. At the far end stood a series of stalls, all empty save for one, which housed a single beef cow, with a strange contraption wrapped around its snout.

Wagner began explaining as the two of them walked to the specimen. “As you can see, we fixed the muzzle to stop the irritation, so the animals seem more comfortable. The auto feeders that Prof. True designed have certainly cut down on labor here, but I’m becoming concerned about some of the side effects.”

He took a deep breath before continuing. “If you’ll look closely, they have started to develop rash of sorts around the muzzle site here.” He pointed around the cow’s snout, where the feeder was attached to a mass of dark, scaly flesh that seemed to be spreading from the device. “There also appears to be some contamination in the blood around the face, resulting in discoloration, particularly in the eyes.”

“I’ve never seen anything like it, ma’am, and to be completely frank, I’m worried for the continued safety of the animals. I think we should cancel the program.”

Lillian transitioned from annoyed to irritated. “Why? Are the animals sick?”

“Actually, no. They appear to be healthy in every other way —”

“But what? I see absolutely nothing wrong here, Kyle. This ranch was built for a very particular purpose and I won’t have its progress jeopardized on account of a skin rash.”

“With all due respect, ma’am … what purpose would that be again?”

Lillian smiled patronizingly. “Don’t you worry about that. Prof. True has that well in hand. I hired you to keep the animals alive while he does his work.”

“Is that not what I said?” she asked pointedly, daring the scientist to retort. Lillian spun, her blond hair and laced dress twirling behind her as she began to walk out. “I’ve other appointments now, Kyle. In the future, I’d ask that you not disturb me unless something’s actually wrong.”

“Yes, ma’am.” Kyle sighed as he turned back to the animal before him. It snorted gently, raising its head to gaze back at the scientist through eyes that glowed red like fiery coals.