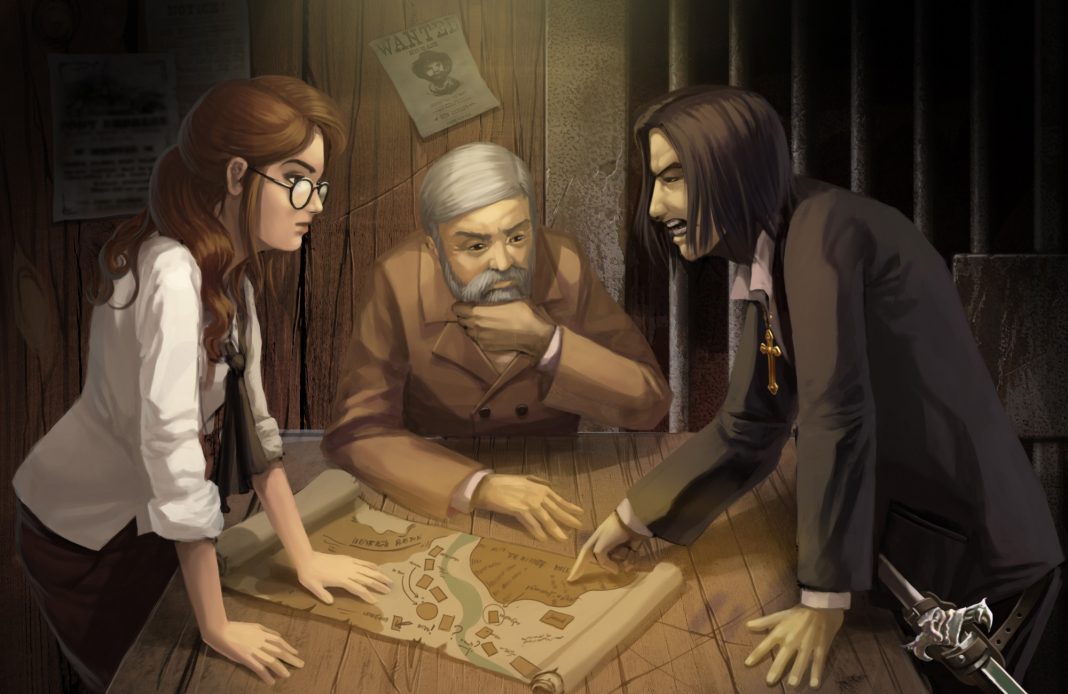 “You understand my hesitation, of course,” Abram said, begging understanding from the scientist as he paused his pacing behind his desk in the Sheriff’s Office.

“Monsieur Grothe, as a man of science, I assure you that my skepticism exceeds yours by tenfold,” Pasteur remarked, his eyes wandering to the silver cross that hung at the Sheriff’s chest. “But the more I think of it, the clearer matters become. As I have traced it, the epidemic began after the circus arrived, and with only few exceptions, Hawley’s people have largely avoided its effects.”

“But Ivor has worked to help with that. The tents … the Sanatorium –”

“A ruse … an elaborate charade intended to divert our attention. I have tried to track the recovery of patients in town, but all roads lead to and end at their so-called ‘Sanatorium,’ where that troll, Odett, denies me entrance at every turn. There is something amiss about the ‘healing’ the circus promises.”

Abram thought for a moment, remembering recent encounters of his own. “You’re not the only one. But you’re not talking about poor medical practices; you’re calling the circus’s ringmaster a demon.”

“I said no such thing,” Pasteur asserted. “I said that Madame Morgan called him a demon. I do not understand the rite she performed, Sheriff, any more than I suppose you would condone it. But I believe she saw something altogether invisible to my eyes. Not only did she identify Ivor as the source of the plague, but she claimed insight into his hidden nature and ambitions, both of which involved the destruction of this town and everyone in it.” The scientist stopped his pacing to look Abram square in the eye. “That is why I am here. You have a responsibility to address this, even if it is only remotely true, just as I have a responsibility to apply this new hypothesis to my research.”

“Let’s say you’re right, Doctor. There are no charges to arrest a man on suspicion of being some kind of a … a … a ‘plague-demon’.”

“Perhaps I can help with that.” The two men turned to see a young woman standing in the doorway, eyeing them both with hesitation through a pair of spectacles and a few curls that escaped confinement within the bundle atop her head. “Are you really going after Hawley?”

“Indeed we are, Miss –?” Abram said, gesturing her inside.

“Batten,” she said. “I’ve been working for the ringmaster for months now, but I won’t smile and pretend ignorance with that murderer another day.”

“ ‘Murderer’, you say?” Pasteur said. He turned to address the sheriff once more. “If I’m not mistaken, that is still a chargeable offense, even in Gomorra.”

Abram gave Pasteur a warning glance not to push his patience as he turned his attention back to Valeria. “Why don’t you start at the beginning, Miss? Tell me everything you know about Ivor Hawley.”