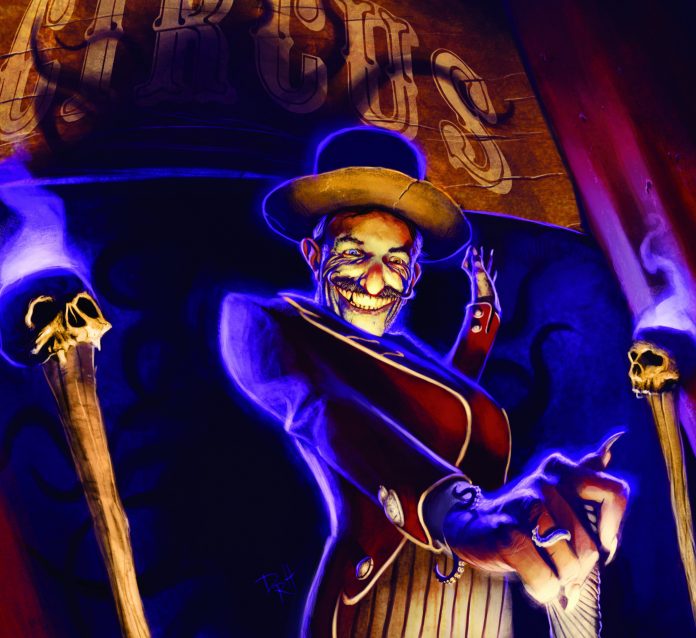 As Ivor Hawley walks, he stirs broken and heartless people into his wake, a comet of ill omen passing through and tearing a dark patch from the heavens. None are more heartless or more broken than Kevin Wainwright, the little man following at his heels, eager and fearful like a whipped dog.

“Two days until opening night,” Ivor says without looking back. “Will we be ready, Kevin?” Micah Ryse spies the pair walking past as he cuts a side of bacon for his breakfast, and carves a gash right between his thumb and forefinger. He looks at it as if to grunt in pain, but then simply, silently returns his gaze to Ivor.

“We’re going to need everything to be perfect to really wow this town,” says Ivor. “Everyone has to be in top form.”

“Everything’s going to be ready, s-s-sir,” Kevin says, head jerking. “The, ah, the trick shooter arrived yesterday, and the, ah, ah, the clowns have been rehearsing all week…” One of those clowns — one whose makeup never seems to come off — lies asleep, but looking like a sun-baked corpse sprawled next to a sledgehammer and a half-assembled fortune-teller’s tent. As Ivor’s shadow passes over him, the clown twitches with newfound energy, flails into a standing position like he’s having a seizure in reverse, giggling manically and pounding in the tent stakes like they were rabbits buried up to their necks.

“Good, good, I love their act!” Ivor chortles. “I only hope that our more traditional clowns can keep up with… our ‘special’ sorts of performers.” He spins his cane, wind creating little whirling dust devils in his path. “And our advertising? I don’t want anyone to miss the show.”

“Arnold, he, uh, he handled our advertising…” Kevin stutters. “There’s, I’ve seen his posters, and our barkers in the town… But, uh, I don’t think… I mean…” Kevin trails off. Working at his sun- bleached bench, masked Jia Mien uses his forbidden alchemy to mix together the show’s pyrotechnics. Ivor glances his way, and instinctively Jia bows his head in deference, looking back up to see the sensitive chemicals he’s holding curdling and turning black from the heat of his hand.

“Oh, don’t worry, I know we’ve not got our money’s worth. How could we, when we’re too astounding to describe?” With an airy flourish, Ivor laughs at his own wit as he walks by Mongwau the knife-eater practicing his endurance by holding his hand in a campfire. As Ivor laughs, a knot in one of the logs bursts. Startled, Mongwau yelps and falls backwards while hoping no one saw his momentary fright.

    “Uh, yes, yes, of course,” Kevin replies. He winces, grits his teeth, in anticipation of something terrible. “There’s, um, there’s one small problem that has to be addressed…”

 Ivor stops and sighs. “Kevin. We’ve spoken about this.”

  Ivor kneels down to eye level with the man, giving his shoulder a paternal tap. Hot shame radiates all through Kevin’s skin from the ringmaster’s touch, his shoulders buckle like he’s trying to dislocate them. “You don’t need to worry about this, Kevin. You’re a good man! You don’t need to drive yourself crazy over every little thing.” He starts to jostle his assistant playfully. “All right? I want you to remember how well you’ve done, okay?”

Kevin blushes for at least three reasons. “I’m sorry… I mean, okay… our suppliers, some of them are starting to say they can’t deliver, and I just don’t want to let you all down…” he says, lying about that last part, but Ivor doesn’t notice because he isn’t the one being lied to.

“You’re not going to let us down, Kevin!” Ivor says, rising back up, theatrically pulling his waistcoat with his thumbs. “It’s hardly your fault if someone else made a promise they couldn’t deliver on. We’ll just make do with the supplies we have and abduct their lying salesmen once we have our cages set up, and everything’s going to be simply smashing!”

The ringmaster smiles, eager and genuine, and in all the hastily assembled bunks around them, sleeping carnies’ dreams turn to visions of death and ruin. “Yes, we’re going to put on a show this town will be talking about for the rest of their lives!”