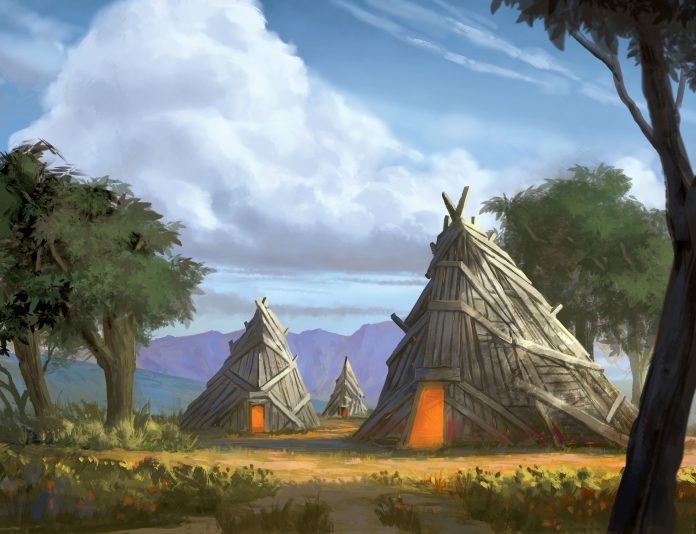 Black Elk tried to relax as his spirit rose from his kneeling body. Exploring the tribe’s new home delighted him, but strange rumors of nearby Gomorra unnerved him.

As Black Elk widened his awareness, his spirit floated above the camp. He saw men raise the wooden hearts of new dwellings, and women spread seeds in small fields. Their shared commitment inspired him as he moved toward the marshlands, following the paths leading to the town.

s the Wardens’ camp dwindled behind him, hazy outlines of buildings came into focus. Empty grey air writhed weakly around him as he approached. He saw scattered places above where light dimmed, windows into the dark void beyond as it strained to pour into our world.

The outlines sharpened as he approached. Circus tents stood distorted, almost gnarled, outside town. A coppery smell gripped his breath, refusing to yield when he recognized the tang of blood and tried to push it away.

Elk entered the town. The south side was newly built. The peoples’ faces showed hope. They spoke of a gathering to decide a new leader. But their eyes always drifted south, avoiding the ruined north end. Black Elk moved with reluctant slowness toward those blasted relics of madness.

Elk recoiled, rushing back to his body. He opened his eyes and put his hands on his sleeping furs. Like the rest, he had yearned for this home, but there was a great danger here, lurking out of sight, waiting. He went to share this with Laughing Crow.

The old woman smiled, rubbing her hands together. “Your eyes say I shouldn’t ask, but you do bring me the best stories. Spit it out.”

Elk spoke of his vision of the land they had claimed. He said the warfare from Gomorra’s past left the veil between worlds damaged and the entire region vulnerable. The evil of that day had been defeated, but the land had been left broken and open to dark invaders.

Laughing Crow looked into the sky, bright and blue, and sighed. “I warned him. ‘We camp near a fresh carcass. The beast that killed it is gone, but the blood still draws wolves.’ Sometimes Stephen lets that headdress do too much talking. Sometimes he dreams more than you, Black Elk. But life without dreams is sleepwalking. Either way … now you know the work ahead of us.”

They looked out in the direction of Gomorra, wondering how much blood would be shed to heal this land. The silence was broken when she handed him a twined bundle of roots. “Chew this. It doesn’t do anything, but the sweetness helps to cheer me up.” Elk sighed and took the bundle, leaving in silence.