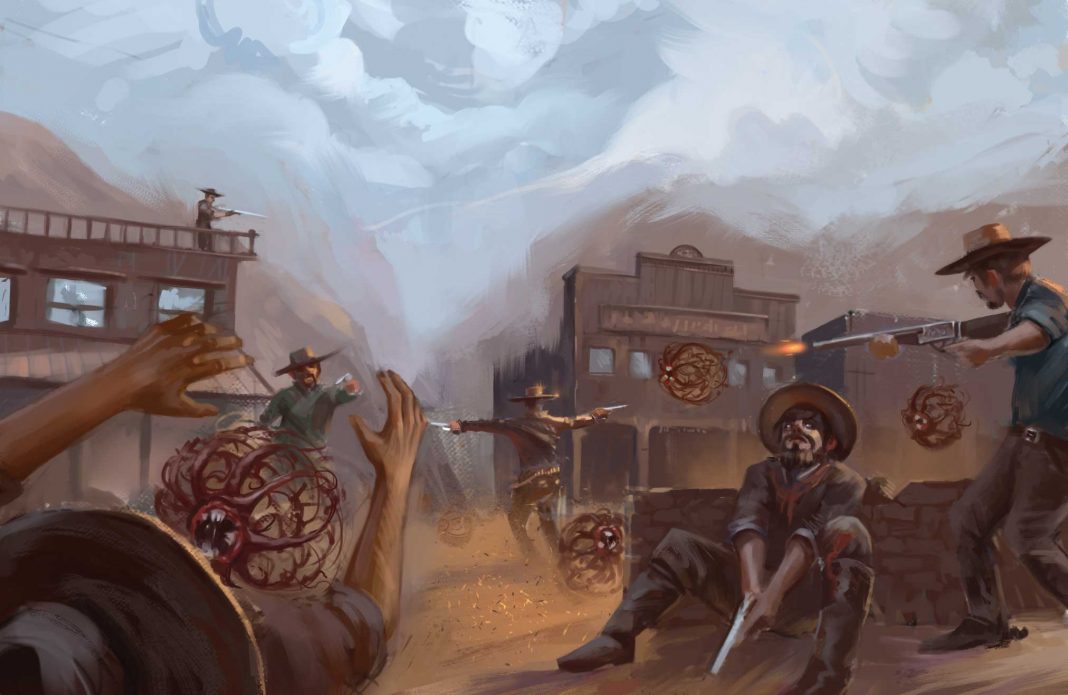 Sheriff Montreal ducked to avoid the swipe of Seville’s bowie knife, reaching for his pistol as he felt the blade graze his Stetson. He shifted his weight and swung the butt of his Colt into the big man’s temple, sending him crashing to the sidewalk.

Before he could catch his breath, he heard a scraping sound on the boards behind him and whirled just in time to see the abomination lunge at him, its thorny limbs whipping through the air. He dove sideways to avoid the thrashing mass of the tumblebleed, landing hard in the dirt. The creature turned toward the motionless Seville as Dave took aim at the knot of teeth at its center. It screeched as the bullets tore through it, dropping to the ground next to the outlaw.

He’ll thank me later, Dave thought sourly, pulling himself up.

Sloane’s gang had come into town seeking revenge for the death of one of their own – a death she had laid squarely on Dave’s badge. But as he and his deputies had walked to meet them, a panicked shout drew everyone’s attention:

The abominations swept in from the north, attempting to entangle anyone in their path and bleed them dry. In moments the town had spiraled into chaos, and skirmishes had broken out everywhere, as his deputies and the outlaws fought the new threat … and each other.

The last time Dave had seen Sloane, she and Stowe were fending off an attack near Pearly’s. She had shot at him haphazardly from across the street, but her aim was thrown off as a tumblebleed wrapped itself around her leg. He’d lost track of her when Seville’s hulking form lunged at him, and now she was nowhere to be seen.

Amidst the uproar, he spied Abram Grothe kneeling in the street outside of Charlie’s Place, near an overturned cart of bottles. The left arm of his duster was torn to shreds and his hand was  pressed to the brow of a woman lying motionless beside him.

As he sprinted towards them, he saw Abram’s sword buried in the dirt, straight through the mouth of a tumblebleed. A sick feeling welled in his gut when he saw that it was Lucy on the ground, her body covered in small gashes. He dropped to his knees and cradled her head in his hands.

“She’s alive,” Abram said, a bullet crashing through the sign above them. “But she won’t be for long in this unholy mess. Get her to the doc’s.”

“– can wait,” Abram intoned forcefully. “Lucy can’t.” He grabbed a bottle from beside the cart, removing the cork with his teeth.

Dave glanced left down the street; three tumblebleeds rolled towards them.

“I see ‘em.” He pulled his sword from the dirt, pouring the bottle’s contents over the blade. “Take her ‘round back,” he said, striking a match across the cart. He touched the flame to his blade, igniting it in a brilliant glow. “Now!”

Sloane limped along the side of the Pearly’s, wincing with every step. The bandana tied around her leg had stopped some of the bleeding, but droplets of red still trailed behind her. She would need stitching.

She had come too far. Montreal owed her a debt, and she aimed to find him and make sure he paid every cent.

As she rounded the corner, she felt someone grasp her shoulder. She whirled, knocking the hand away and aiming her pistol in one fluid motion. Pancho stared back at her, hands in the air.

“Easy, Señora,” he said quietly, lowering his arms. His handsome features were stained with dirt and blood. “It’s time to leave.”

“I’m not going anywhere, Pancho,” she shot back quickly. “I have a debt to collect.”

“Yes, and it can be collected tomorrow.” He looked down at the trail of blood behind her. “Now’s the time for patience.” He flashed a dashing smile through the grime. “It is a virtue, after all.”

A glimmer of light caught the corner of her eye and she turned to see Grothe, his sword trailing smoke as he swung at a trio of tumblebleeds across the street. Behind him, another man struggled to his feet, carrying a limp figure in his arms. His tin star glinted in the sunlight as he ducked into the nearest alley.

“No, Castillo,” she said, cocking the hammer of her revolver and smiling despite the pain, “patience is overrated.”