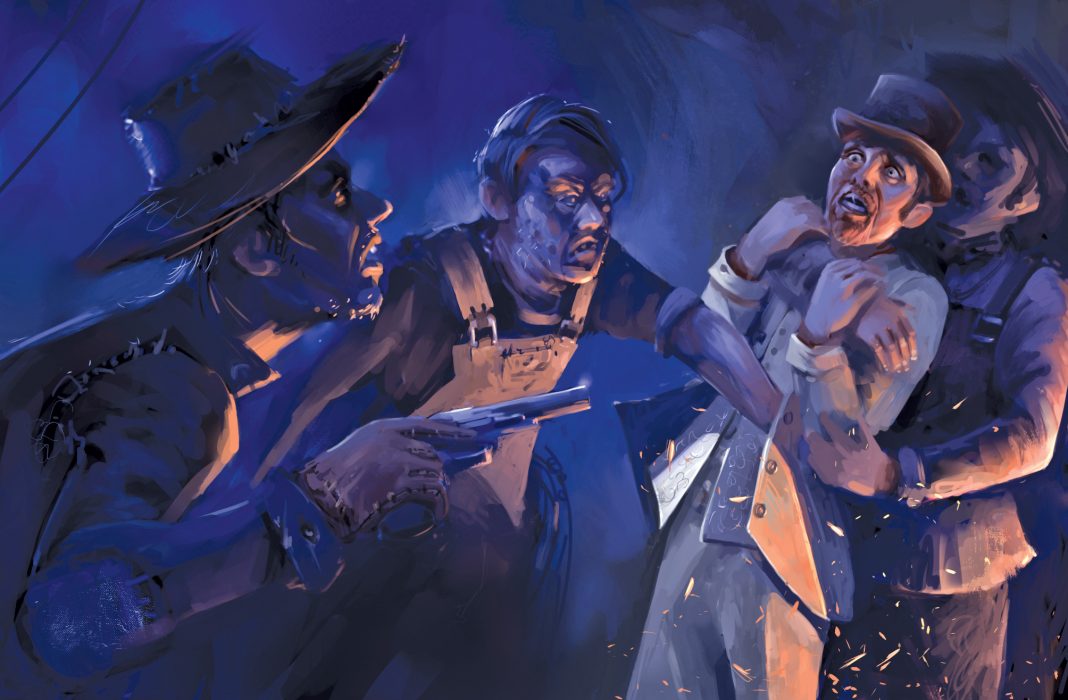 “Excellent, Travis. You look just like him … at least enough to fool someone in the dark. How well can you imitate his voice?” Rafi Hamid asked, standing with the grifter in the alleyway behind Cooke’s Nightcap.

Travis Moone wore a phony beard, along with dark shirt and overalls, bearing a passable resemblance to Max Baine. He cleared his throat. “The Morgan Cattle Company. There’s strange things going on at their ranches out of town. Someone has to do something. Someone has to believe me!” he said in a deeper, raspier voice than his usual timbre.

“Excellent. I doubt anyone could tell the difference,” Rafi said. He held up a small purse of coins that clanked together as the bag moved.

Travis reached out, but Rafi snatched it away, tucking it back into his coat pocket. “Not until the work is complete. Too many rumors about you cutting and running from the job. That poor coach was left to bandits.”

“That was only one time, Mr. Hamid. I couldn’t very well risk my skin just for some coin. Not that little coin anyways,” Travis said with a grin. “What’s yer beef with Mr. Baine, anyway?”

“Ever since Mr. Baine left the Morgan Cattle Company, he’s been sticking his nose in places where it does not belong … and speaking about matters that shouldn’t concern you either.”

“Ahh, he’s been pokin’ around a bit too much about Mayor Whateley. I gotcha. I won’t tell nobody,” Travis said with a wink. Someone else came out from behind the corner. Travis gave a slight wave. “There’s Rico. We got this covered, don’t you worry none.”

“If a word of this is uttered to anyone, Travis, I assure you you’ll have far greater problems to deal with than a couple of swindled drunks.” “It’s better if your companion doesn’t see me. So here is where I leave you,” Rafi said, tipping his hat toward Travis.

With that, Rafi turned back toward the bar. A third person came from the direction Rafi was headed, no doubt joining Travis’s crew as well.

Rafi continued along without stopping, avoiding eye contact with anyone as he did not want to risk more witnesses. He certainly shouldn’t be seen anywhere near Travis and his friends perpetrating a crime. Once on the main street, Rafi slowed his pace to a casual stroll, smiling and nodding towards any citizens who recognized him.

In the distance, he heard a pistol fire, followed by a woman’s scream.