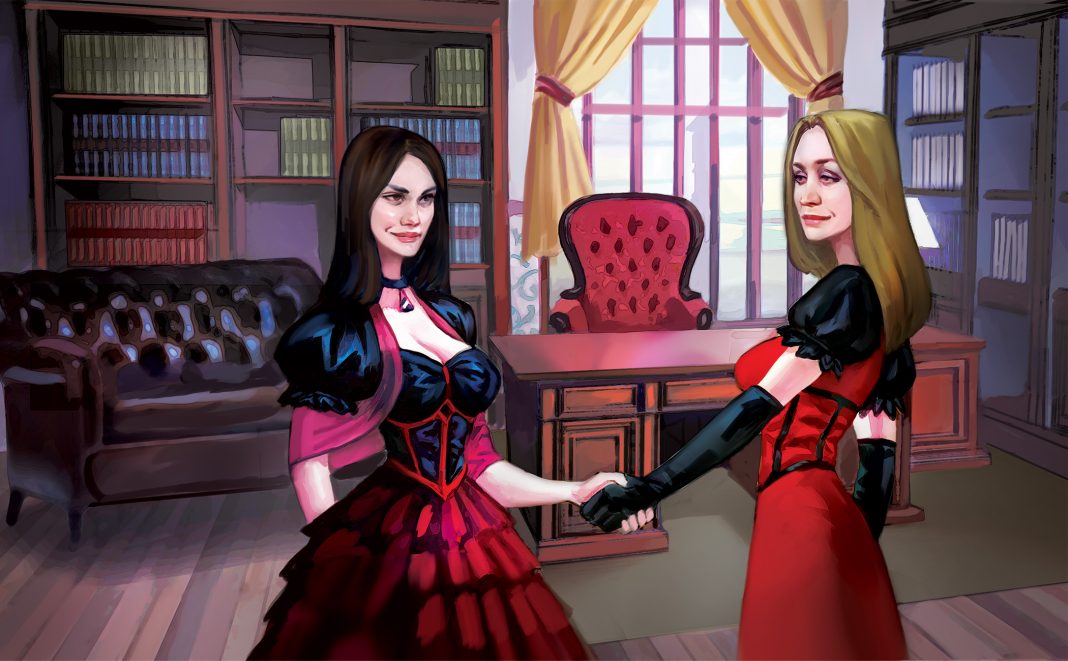 A knock sounded at the door of the president’s office of the Morgan Mining Company, de facto headquarters of all Morgan operations after last week’s chilling events. Despite frightening most of Gomorra’s residents, Lula Morgan would always remember it fondly as the time she took control.

Allying with Ivor Hawley had been unfortunate, but monster as he may have been, he sure did produce results. She smiled to herself, smoothing down the sides of her floral-patterned dress. “Come in,” she said.

“The fact that you can maintain that attitude after what’s happened to this town is disgusting,” came a familiar voice – albeit a bit raspier than she was used to hearing it.

“Lillian,” Lula said. She stiffened behind her desk. “If you’ve come to try to take the company back, I’m afraid you’ll be sorely disappointed. The contract you signed gave half the company to me, which would put us in deadlock save for a couple of matters in the fine print. I assure you not even your lawyers can help you wiggle out of this one.”

“It doesn’t matter.” Lillian Morgan stepped through the door. She looked gaunt, steadying herself with a cane. How these last weeks had aged her, even with Pasteur’s cure working through her system. She waved Lula off. “No, almost meeting my maker has given me some insight into just how cursed this town really is. I’ve danced closer to the devil than you’ll ever know, Lula. Getting the company back? No, that’s not why I’m here.”

Lula wanted to challenge her, to slap the woman as she’d come so close to on any number of occasions. But she was a businesswoman now. She had an image to maintain, and that’s what was important. Instead, Lula raised an eyebrow. “Then what does bring you here?”

“I’m leaving this god-forsaken place. I’ve already signed the papers for the sale.  You can have the damn company. I have enough wealth from that and a number of stores that you can’t touch to start over.” Lillian shook her head. “Though I may go try to find Max. I did enjoy working with him … one of the few honest types.”

“Sheriff’s office thought anything but that.”

“There is more than one side to every story, Lula. I’d think you’d have learned that by now.” Lillian raised her free hand, coughing lightly into her perfumed handkerchief.  “No, you win.”

Lula opened her mouth to reply but Lillian cut her off.

The elder Morgan stepped forward, meeting Lula’s eyes. “I won’t waste your time saying anything pleasant, and don’t for a minute think that me a fool that I don’t know what you did to me. You’ll get yours one day, girl, especially if you’re fool enough to follow after me. That’s one thing Gomorra’s good for … making sure everyone here gets their due.”

“Save it,” Lillian said. She turned, moving with her cane back toward the door. “There’s more to running a company than posturing as well. If you actually listen to someone else for once, you might actually survive the coming days.” With that, Lillian closed the door behind her, leaving Lula to her own devices.

The office was so quiet. So many of her workers had fallen to the illness that had decimated Gomorra. But this was her company now, with no one left to challenge her. Soon enough it would be her town.

Lula pulled out a handkerchief to wipe the spit from the desk, sparing a glance for a large stack of paperwork before her. She would have to find someone else to look that over. She couldn’t trifle with petty tasks like that. But what would she do next? How would she run the company in earnest?

The truth was, Tallulah Morgan had no idea.