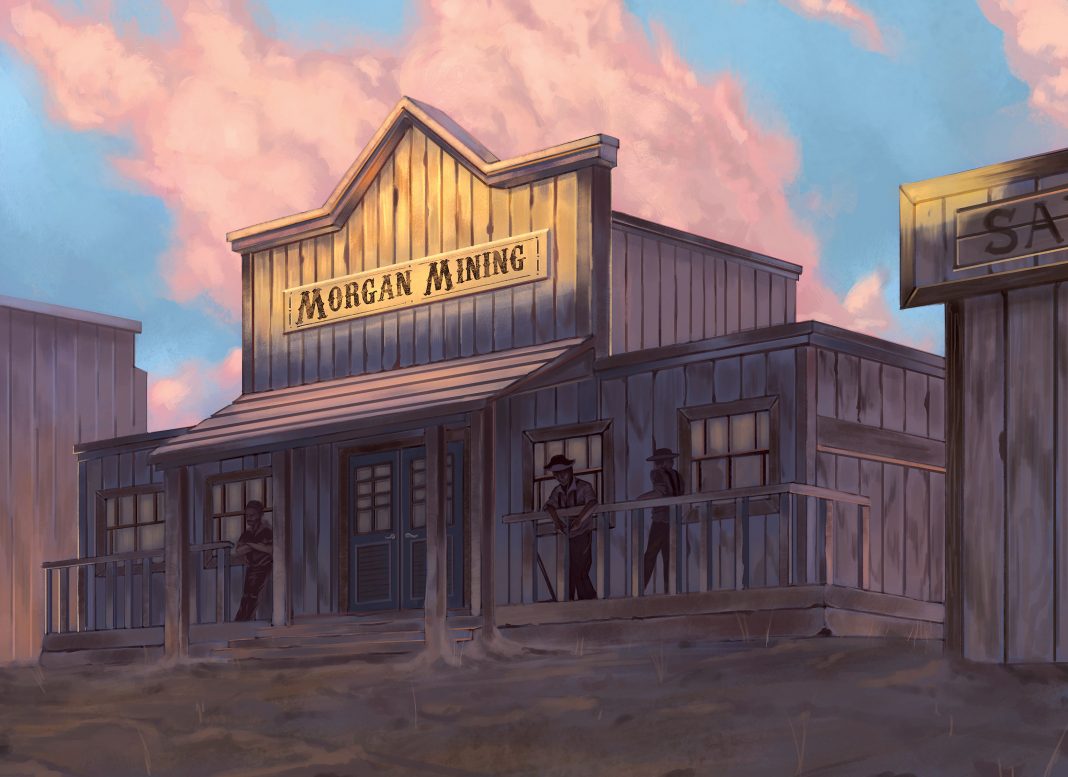 Lula Morgan watched as several men pulled the broken plasma drill out of the new vein of ghost rock that had been found weeks ago, rejuvenating Gomorra’s potential as a moneymaker. Lula’s witch of a stepmother had a knack for sniffing out money. Lillian certainly latched on to wealthy Nathaniel tightly enough to ensure the inheritance. Then she ran Lula out of the ranching game, hoping some dead end mining job would pacify her. And after she’d worked so hard too! This time, though, Lula struck a mother lode … or at least a small vein, as the miners had told her.

The men heaved the contraption with a rope, revealing a metal cone at the end of a cylinder. The machine ran on ghost rock itself, but not nearly as much as they’d already discovered. The plasma drill’s logo read “Sweetrock Mining Company”, which annoyed Lula to no end.

“Men!” Lula commanded, picking up her skirts so they wouldn’t get ruined in the mud. “When True fixes this thing, have him file that off and engrave a new logo on it.”

“What’ll it say?” a voice said, boots and spurs clinking on the ground behind her.

Lula turned around to see Lane Healey, who in turn inspected her men with a wry interest. “Tallulah Morgan Mining Company, of course,” Lula said.

Lula narrowed her eyes. Was he mocking her? This mining operation was almost entirely hers, and she dreaded any association with the company Lillian had stolen from her. Yes, she’d show Lillian – and then she’d take her company right out from under her as well. “You’re right, Lane.” Lula smiled and patted his arm. “We must maintain the brand. ‘Morgan Mining Company’ it is.”

“You’ll need someone to guard the strike,” Lane said with a motion over to the sinkhole-turned-cavern. The building stood half-collapsed on its side in disrepair. It didn’t look like much, but the ghost rock was there.

“This and the other strikes we’re going to find. Why don’t you be a dear and see if those kind Shane and Graves fellows might be lookin’ for some extra work. I need you to secure the maps.”

“In my office. Hired a fellow called McDroste to do some prospecting. If there’s another vein, we’ll find more.” And then we’ll take over the whole Morgan empire and this town in one swoop. Lula flounced towards her company’s new building, and Lane followed her as expected. Once he was trapped inside, Lula would set Lane upon the much more important task of rearranging furniture. The office desperately needed redecorating.