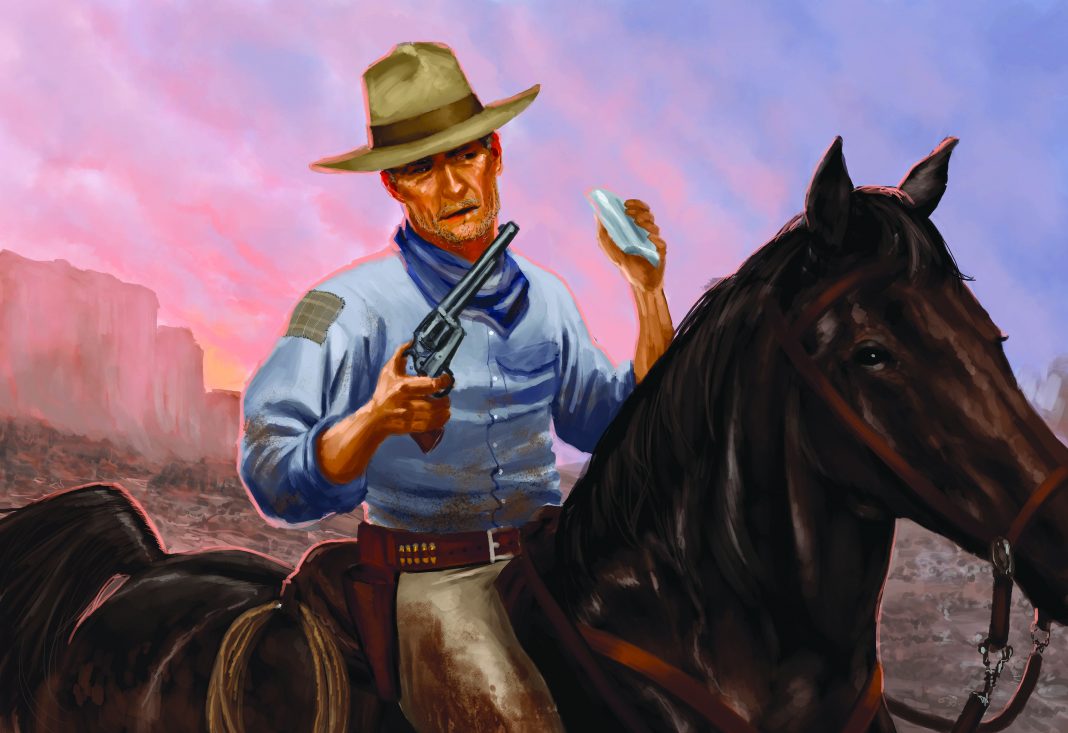 Ulysses Marks’ day was getting worse. All that stood between him and a noose were the shuttered streets of the North End. Broken boards clattered in the wind. Ulysses heard hooves, but the half-wrecked buildings made it difficult for both him and his pursuer to track the other.

Or he hoped so, as he wiped his brow.

He needed the Gang. They liked his old ties to Morgan, so they protected him. The trouble was finding them before the law found him. He started down an alley, but halfway in, the hooves clopped into view.

It wasn’t a sheriff’s pony, though. Morgan kept the strongest stallions for her enforcers.

Ulysses barely turned before a boot caught him in the back.
He flew ten feet, landing in a sprawl. He was trying to shift his spine back as he heard the rider dismount. The growl turned his guts to mush.

“You were worthless on our payroll, Marks. Thought you’d do better stealing it?”

Lane Healey grabbed Ulysses. He tried to draw, but Lane’s gun was already out. His custom titanium autoloader was easily twice the size of Marks’ Colt – but with triple lensed sights and gyroscopic mounting, it always hit. The behemoth weapon easily knocked the Colt away.

Ulysses spat. “I won’t stay an hour in jail … or give Baine the satisfaction. You cross me, my friends’ll know.”

Lane smirked. “Your friends care less about you than I do, Yule. You got no reins to pull here. Now … hand over the take from the auction cashbox.”

Ulysses pulled out his loot. He tried to slap Lane’s hand, but Lane snatched the money away. “That’s all,” Marks said. “You win. You have the best horse, the best gun. Must be nice to get your gear for free.”

Lane pocketed the money and slung his pistol into an oversize holster. “Oh, quit yer frettin’. Keep quiet, lay low, and we were never here.” Lane turned to go, and Marks mewled to his back.

“Lillian thinks she can use her purse to get Crowley elected? Might want to steal thatmoney, too. Won’t matter come Election Day.”

Lane turned. He looked at Ulysses’ eyes, and saw a gleam of anticipation inside the drunken haze. He reached into his pocket, and pulled out … a flask.

“This is Lillian’s personal stock. I’ll trade a Kentucky swig for some details.”

Ulysses licked his lips. “My friends are all quiet types like you. All I know is somethin’s goin’ down at the debate.” He reached out, but Lane pulled it back for a swig of his own.

Lane swung onto his horse. He knew Crowley and Byre would have a debate before people voted. The whole town would be there. If some blonde with a chip on her shoulder wanted to land on the front page, she might say a few words. But if she wanted blood more than power, a hail of bullets speaks louder.