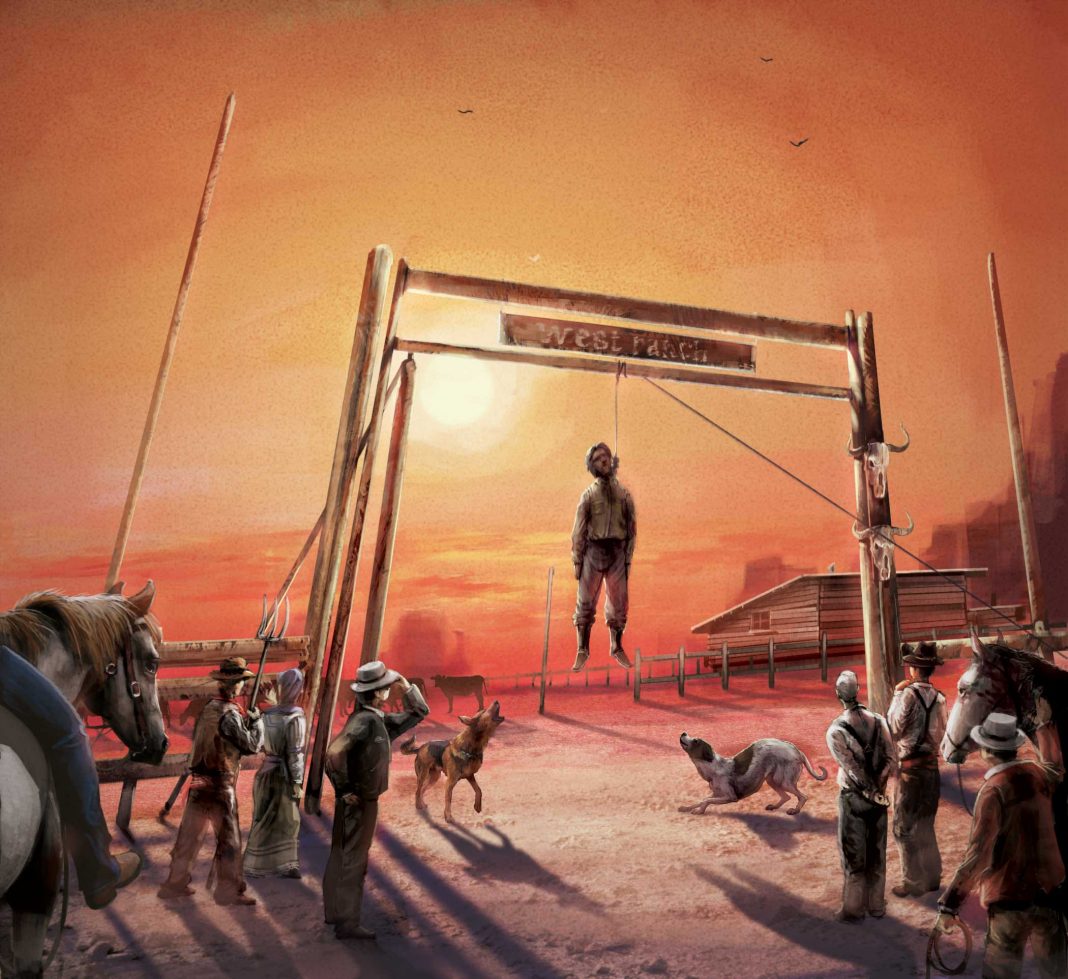 Hooves pounded on the dry Maze dirt in rhythm with Sloane’s heart as she raced through Gomorra. A dozen of her gang’s most ruthless members followed behind, kicking up dust as they took a hard turn together toward the town square.

For early morning, the town was somewhat empty and quiet. Shops were closed up, the saloons were hours from having anyone inside, and the streets remained silent.

Passing the town square, they turned toward the part of town where she’d gotten word the gallows would be set up. Sheriff Montreal wanted this to be a quiet affair, but Sloane would see to it that the town would talk about this for days, just like the last time her gang sent the Law Dogs a message.

But when she turned the corner, she saw the trap door already swung downward and Lawrence’s lifeless body dangling from the rope. No hangman was in sight, but several of the sheriff’s goons guarded the area. Lawrence had been hanging there for some time. The rats didn’t even bring him down proper.

The sheriff himself stood off to the side, shooing away one of the gawkers, a red-haired girl with a camera.

“Dave!” One of the Law Dogs, a blonde girl with a deputy star called out. She pointed directly at Sloane. “We got trouble!”

Sheriff Montreal turn to lock eyes with Sloane. He didn’t show fear, but casually turned to walk in her direction as she spurred her horse toward him, leaving her gang to wait behind.

Rage built up inside of Sloane, more than ever before.

They killed one of yours …, a voice not her own echoed inside her head.

Yes, yes they did. The plan had been to rescue Lawrence, but he was gone now, left
hanging for the crows. The smart play was to leave.

This is nothing but Montreal’s arrogance on display, the voice continued.

“Sloane,” Sheriff Montreal said, his voice somber and low. “Justice has been served here, nothin’ else. Now I’m going to do the fair thing and let you and yours take him for proper burial. Town’s goin’ through a lot of changes right now and the last thing we need is to litter the streets with more bodies. You hear?”

Vengeance. There must be vengeance…

Sloane’s hand drifted toward the leather holster at her side, grazing it with the tip of her finger. But she didn’t draw yet. “Montreal, you killed a good man. Lawrence didn’t deserve this and you left him to rot. You can try to play it noble all you want, but you’re a rat and you’ve insulted the whole gang with this … display.” She waved her hand toward the gallows. “There’s no turnin’ back from this!”

Montreal produced a pair of six-shooters, leveling them at Sloane. “If that’s the way it’s gotta be, Sloane, then so be it. I tried to offer civility.”

Sloane gritted her teeth as she stared down the barrels of those guns for a moment before wheeling her horse around and back to her gang.

“What do we do now, boss,” Fred Aims spoke, clearly itching for a fight.

Sloane seethed with rage as she wrestled to think of a plan.

You said it yourself, the voice whispered. “There’s no turning back from this. This cannot stand! There must be VENGEANCE!

The outlaw clenched her fist above the pistol resting in her holster one last time before drawing it with a flash. “I’ll burn ‘em all for this!” she spat as she spun her horse back around to attack.

Before Sloane could blow a hole in Sheriff Montreal’s head, her horse reared in panic, letting out a shrieking whinny. The other horses in her gang spun around, everyone losing control. “Whoa there! Settle!” Sloane pulled back on the reins hard in an effort to calm the beast.

Another deputy shielded his eyes from the sun, looking past Sloane to a series of dust clouds approaching the edge of town. “Dave, something isn’t right.”

The dust trail grew, coming closer to them. At first it looked like tumbleweeds, but there were too many and moving too quickly considering the lack of wind. As they got closer, what appeared to be mere briar and thorns instead turned out to be undulating tendrils with sharp edges. Toward the center of each of the rolling masses was a maw of sharp teeth.

“Tumblebleeds!” shouted Alice Stowe, as a scream echoed from down the street. She fired the first shots, not at the Law Dogs, but out toward the horizon at the creatures.

The deputies scrambled, as did her gang. Fred and Silas Aims leapt from their horses, and Sloane slid off her own. One of the tumblebleeds bounded toward her with astounding speed, Sloane barely able to get off a few shots at it before it reached her, collapsing in a soggy heap of briar and blood.

Sloane reached into her vest to produce new bullets for her gun, quickly reloading. Her frightened horse took off in a run. Slone seethed as she called out to her people. “Don’t forget what we’re here to do!” she shouted. And with that, she leveled her gun at the obnoxious blonde deputy.