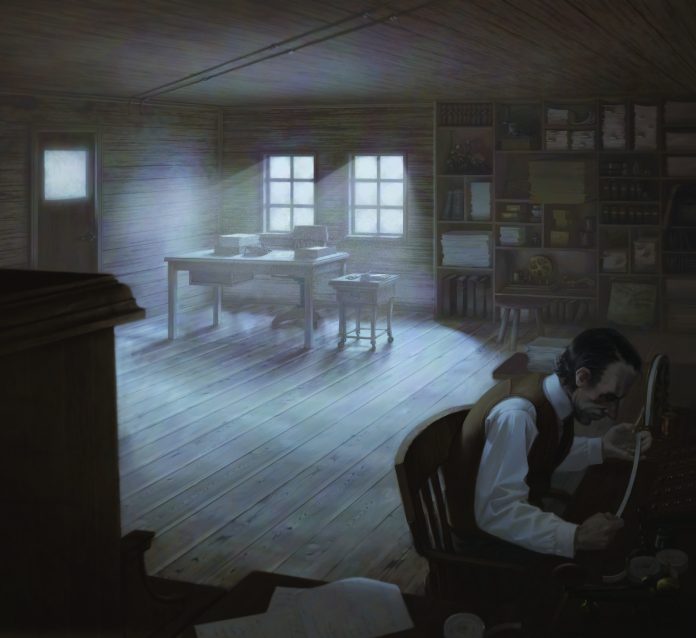 Bullets slammed into the walls and posts of the Telegraph Office, sending splinters flying everywhere. Lucy Clover had had enough. “Why, I ought to march right over there and teach those red bandanas a lesson.”

“Easy does it, girl,” Tommy Harden said to his fellow deputy. “Those Sloaners are pouring in enough lead to sink a maze dragon.” He peered around the corner of the watering trough that served as a makeshift bunker and squeezed off a pair of shots from his peacemaker.

“Y’all seem to be in more trouble than a passel o’ dogs in a skunk holler,” said a laconic drawl from behind them.

The deputies whirled, guns leveled at the stranger walking out of the building towards them.

“Hold yer fire, I’m on yer side. Now, lemme through, and I’ll take care of them varmints for y’all.” The dude was tall and lanky, with a tattered duster flapping loosely in the breeze. What caught the deputies’ eyes, however, were the contrasting black and reds of his ten-gallon hat and bandana. His eyes glowed with infernal light as they rose to survey the outlaws in the street.

As the confused deputies stared on, the tall stranger strode forward into the unrelenting crossfire. He stopped, appearing to further appraise the situation. More bullets flew past, some through the duster. Lucy imagined that some even went through the stranger himself. If so, he gave no sign of pain and no trace of blood spurted from any wound.

At last, the stranger drew fast as lightning, crossed his pistols, and fired straight and true. Two Sloaners would not make the ride back to Soddum.

The remaining Gang members turned tail and fled. Guns uncrossed and elbows locked at his sides, the stranger fired off two more shots, wounding one in the shoulder, yet another in the thigh.

After a minute or so of silence, the deputies peeked out to verify that the Sloane Gang had in fact retreated. With that, they rose to thank their mysterious benefactor. Except that the street was empty save for the two dead Sloane dudes.

Lucy smelled gunpowder and looked down. She crouched and noticed a playing card  where the stranger had stood, smoldering around its tattered edges. The joker’s face grinned back at her before the card burned up in a flash, the ashes blowing away in the hot California wind.