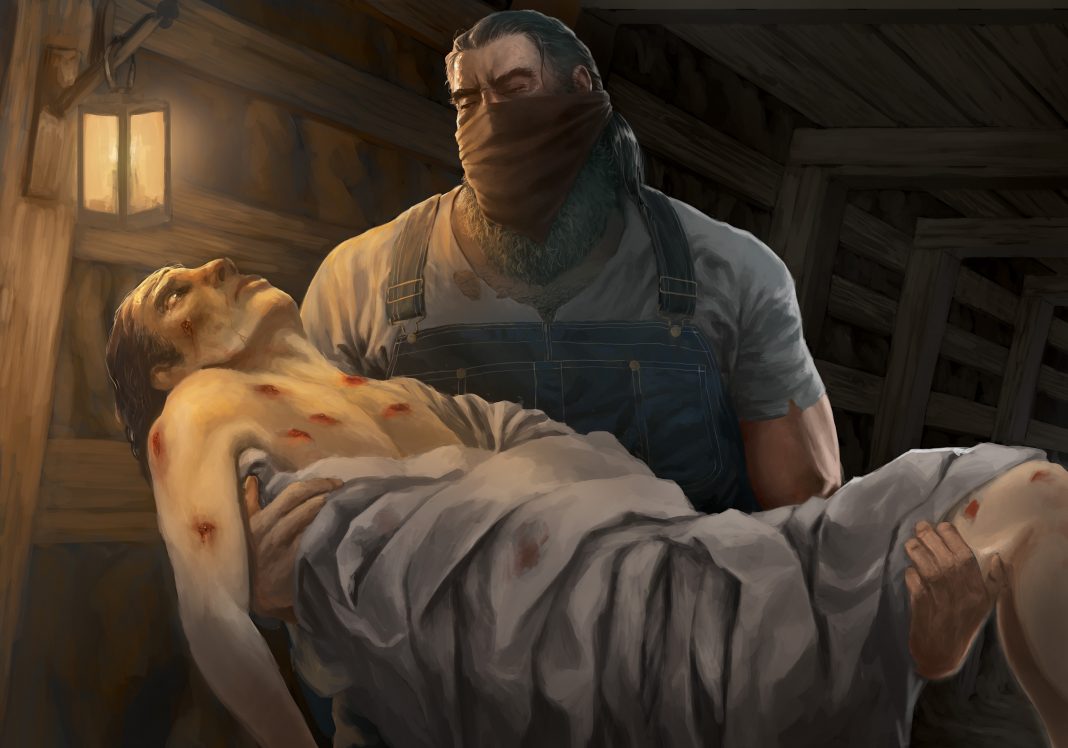 Soon enough, however, he entered a small room and the light returned, emanating from a lantern hung on the wall. The space was new to the Sanatorium, hewn from the rock beneath its foundations to contain two items: a wooden cot and a large iron door.

Horace entered the space with his precious cargo, a frail-looking man wrapped in a white sheet. He was gaunt and pale, resting in Horace’s enormous arms, limbs dangling. Open sores and scaly calluses speckled the man’s skin; fevered sweat washed over gruesome fluids oozing from the deeper ones.

The man groaned awake as Horace gingerly laid him on the cot. “Am I dead yet?”

Horace looked down into the man’s eyes, brushing away a wisp of hair threatening to obstruct them. “No,” he sighed simply. “Death is not the end of this.”

The man seemed disappointed but was far too weak to fully express it. “Where are you … taking me?”

“To the darkness … where you can rest.”

“Better? No.” Horace looked up and down the man’s body with pity. “There is no ‘better’ … only the darkness.” He turned slowly to the iron door, sliding the pair of posts barring it shut. “You can wait there until it’s finished … until the master is ready.”

The man let out a grunt as he used some of his precious energy reserves to turn his head toward the door. “Who? Odett?”

“No … his master.” Horace slid the tattered cloth around his neck up over his nose and mouth. He swung open the door as a wave of cold, damp air sprung forth, releasing an unholy stench. He winced slightly, but took comfort in knowing his patient would find it soothing.

Horace returned to the cot, leaning down for one final look. The man’s eyes, the only part of him with any real life left, pleaded with Horace to end the suffering. The large man urged himself to finish the task, knowing the end of this trip would be just that. He adjusted the sheet so it wouldn’t be binding on the man as he rested, then lifted his hands and laid them gently across his chest.

Reaching down, Horace lifted the man effortlessly off the cot and carried him into the dark tunnel descending from the doorway. He could hear the shuffling of the other patients who remained nearby as he located another cot, laying the man to rest comfortably upon it.

Horace placed his large hand upon the man’s as it lay upon his chest, looking down one last time into his eyes, barely visible in the glow from the lantern. “Try to rest, friend. It will all be over soon.”