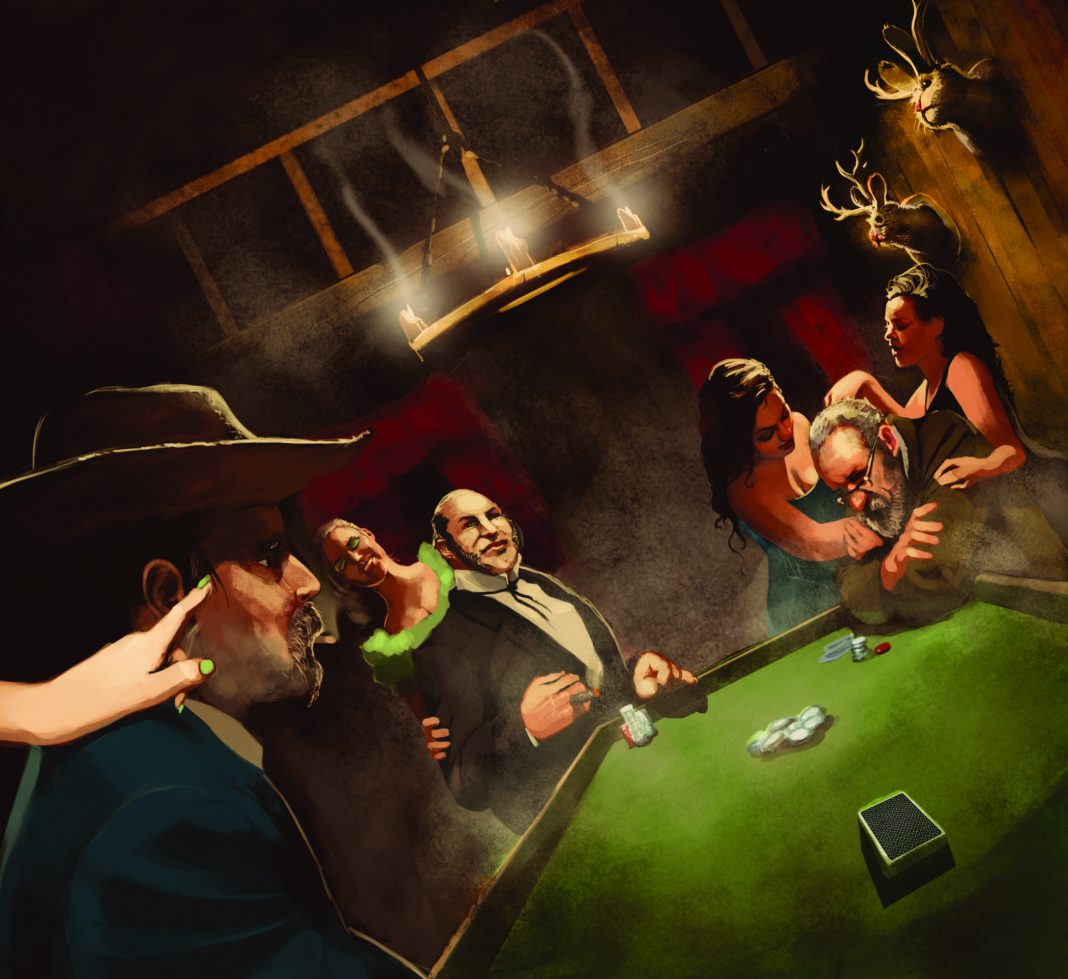 Every eye in the Killer Bunnies Casino was on Tallulah Morgan, every voice silent, holding its breath in anticipation as the dealer across from her flipped his cards. Nine … Five … Ace … Jack. Even the dealer smiled as he pushed $250 worth of chips in her direction.

“Well, how do ya like that?” she asked in mock surprise. “Guess that means … another round of drinks on me!” she shouted, answered by a chorus of soused cheers. It was clearly not the first round of drinks she had bought for the patrons, and even the bartender’s movements were lurching and drunken as he poured a row of shot glasses.

“My, look who’s the popular one,” said a prim voice from behind Lula. “You finally found a way to buy friends. I’m so proud.”

“Why, Lillian Morgan, as I live and breathe!” said Lula in a voice as fake as a thirty-seven dollar bill. “It’s so good to find you out here, finally mingling with the other civilized folk!”

Lillian’s forced laughter preceded her as she slid onto the stool next to Lula, dropping a fistful of chips onto the green felt table. “I know it must seem like I’m quite the bore. It takes a lot of time and effort to actually make money, something I’m sure you will realize one day.”

“Oh, dear, you seem to be keeping up quite fine!” Lillian responded, looking down at the cards sliding on the table toward her: fourteen. “You’re already acting like quite the heiress: spending Daddy’s money like you had a week to live, treating Maxwell Baine as if he was your personal butler. Why, one could hardly believe that just a few months ago you were an absolute nobody!”

“Wait, that guy’s name is Maxwell?” Lula said after a brief pause. “Huh. I’ve been calling him ‘Maximilian’ this whole time.” She glanced over to the dealer, showing a nine, and after a too-long contemplation motioned for another card: seven. “Oh, look at that, bust! Oh well … not like you mind, do you, dear Lillian? I’m sure you’ve lost far more on far worse bets.”

Lillian tittered into her hand, as she was certain high society ladies did. “Of course, dear, why else would you be out here if I wasn’t known to play very, very long shots?” She motioned for the dealer to hit her, and scowled at the ten that slid her way. “Hmph. Look at that. It appears your irresponsibility has cost me again.” The dealer looked between them nervously as he collected their chips.

“You know, Lillian,” said Lula, “if you’re tired of me, you could just be rid of me. I’m sure you have much, much better things to do than deal with my like. Just buy me out and I’ll be off.”

“Oh, not at all!” Lillian said, caustically. “You shouldn’t listen to all those nasty rumors about what an unlovable, intolerable little trollop you are, Tallulah. I’d love to spend time with the precious daughter-in-law I never knew I had. In fact, that’s why I came here to find you! Clearly, you’re here because you’re under-stimulated. You need something to occupy you! That’s why I’ve decided to give you some responsibility.” She smiled like a viper and folded her hands. “The hours will be long and tedious. But you wanted a chance to prove yourself, right … an opportunity to show your worthiness for your late father’s money, to learn the respect for his employees you so desperately need? Of course, if you aren’t interested, you can always say no. Just admit you can’t hack it, and you can be off.”

“Oh, I wouldn’t dream of it, Lillian,” said Lula, not even bothering with the pleasant tone at this point. “I’d love to take anything from your company I can get my hands on. I’m sure no matter how much I need to learn, it won’t take me long to get better at it than you’ve been so far.”

The dealer looked between the two of them and stammered, “A-Are you two ladies okay, or is something going on here, because –”

“Just deal the cards!” they snapped in unison.