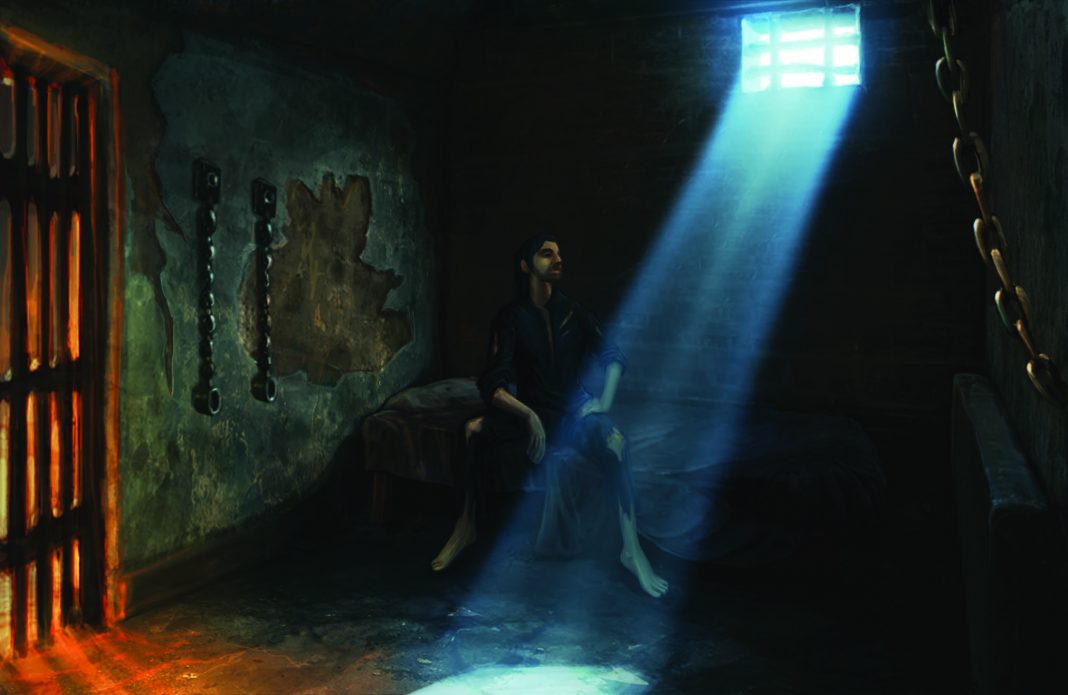 With a whiskey bottle secure in hand, Clyde Owens bounded into the Gomorra jail. He sang in a gruff, raspy voice and didn’t give a lick about keeping in key:

“I drink my whiskey
ev’ry day and night,
from sunrise to sundown,
then by candlelight.

Some folk they don’t like it
but I’m telling you true,
Gotta drink more whiskey
when I see the likes of you.”

The last line echoed through the otherwise silent building, the rest of the crew having gone to set the trial up. Clyde stopped in front of a dingy cell, dirt caked on the grout between bricks. The sheets and mattress were tattered, having been used by dozens of other offenders. Flies buzzed near the bucket on the floor left for prisoners to do their business. It stank nearly as bad as the criminal who sat in the cell: Lawrence Blackwood.

“Blackwood, ya scum. Miss Applegate was a sweet lady … didn’t deserve no likes of your sort bein’ trigger happy,” Clyde slurred, spraying spit through the bars. “Pretty girl, now she got a hole in her head.”

Lawrence Blackwood folded his hands over one another, eyes cast down at his feet. A thin ray of light from a high window shone down in front of him. “I’m sorry,” he said softly.

“Two more days was all I needed. Was gonna work up the courage to call on her, bring her flowers ‘n everything. Make a mash ‘n show ‘er some gentlemanly kindness.” Clyde took another swig of his whiskey bottle. “Now all she’s got to keep her warm is dead flowers on a pine box. Yer worse’n crowbait!”

“Yes, I am.” Lawrence agreed, unmoving.

Clyde shook his bottle, then turned it upside down. Only a few drops trickled to the floor. Empty. He cursed under his breath and narrowed his eyes on Lawrence. “Yer goin’ to Hell for what you did.”

“I deserve it, worse than hell if there is such a thing,” Lawrence said.

Clyde’s face tightened and he chucked his empty toward Blackwood’s cell. It shattered against the iron, shards spreading across the floor to bounce off the outlaw’s boots. “I said yer garbage, Blackwood! Ain’tcha gonna fight back?!”

Blackwood didn’t even flinch. He said nothing, and silence lingered in the jail cell.

Clyde frowned, the wind taken out of his sails. He’d thought that pounding on a criminal would help soothe his loss, help him not feel so alone. But Lawrence wouldn’t give him that satisfaction today. “Bah,” he rasped, voice quieting as he turned from the cell. “Need ta git myself ‘nother drink. See you by the hangin’ tree, Blackwood.”

The bounty hunter thought he heard the faint sound of crying behind him as he stumbled back down the hall.