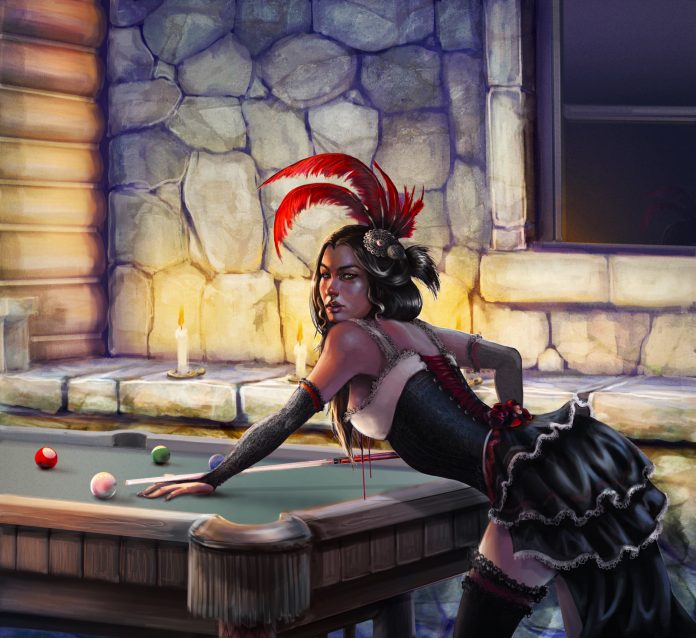 Genesee “Gina” Tailfeathers made a direct line to the center section of the Union Casino’s long wooden bar. With a twirl, she perched on the barstool next to a trail-worn drifter, brushing her boot against the man’s leg. She caught his eye as he looked up from a row of drained shot glasses.

“How ‘bout a drink for the lady?” the man inquired.

“Thanks, but I don’t take charity,” she said, considering the stash that pulled his purse downward from his belt.

“You play?” he asked, indicating the billiards table in the corner. “It wouldn’t be charity if it were over games.”

Gina gave a quizzical look. “What’s the harm?” she said. The man led the way to the table, failing to notice the chuckles of the other patrons.

“Easier’n catchin’ fish in a rain barrel, my dear girl. Sink a ball, you get the points,” he said. He racked the balls into a pyramid shape and broke them, sending a ball into a corner pocket. “That was the three-ball, so three points for me.”

“My good sir, you go far too fast for me,” Gina teased as she nicked the cue ball, which in turn grazed a ball.

The drifter sunk a few more balls while Gina struggled to get her cue to even make contact. Eventually, one of Gina’s shots finally went in.

“My, you’re quite the fireball, aren’t you,” the man said half mocking, half praising. “That’s a big twelve points for you.” He then pocketed the seven.

For her next shot, Gina observed that five, the low ball, was along the rail. In one deft motion, Gina brought her stick behind her back, arching to emphasize her décolletage. She winked as she expertly sunk both the five and ten balls.

The drifter drew in a quick breath as his eyes widened. Rattled, he scratched his next shot. Gina promptly slammed the fourteen-ball into a corner pocket. The drifter staved off complete disaster by scoring the thirteen. Eventually, Gina found herself at fifty-seven points with the four-ball perched on the lip of a side pocket. Rather than take the straight shot, Gina sent the cue ball away from it. After several caroms, the white ball kissed the four into the welcoming pocket.

“Sixty-one for the lady,” shouted a gleeful bystander. “Still undefeated!” Gina held out her hand proudly to receive her winnings.

Gina made an ear-piercing whistle that dispatched two burly patrons to grab the drifter. One set of hands held him, while the other removed his stash and tossed it to Gina.

She caught the bag and dumped the ghost rock into her other palm. “A drink indeed. For me…” She paused before resuming a bit louder, “and my friends.” She nodded to the two men on either side of the man. “Kindly show him the door.”

He had one last bluster in him. “You’re pretty good.”