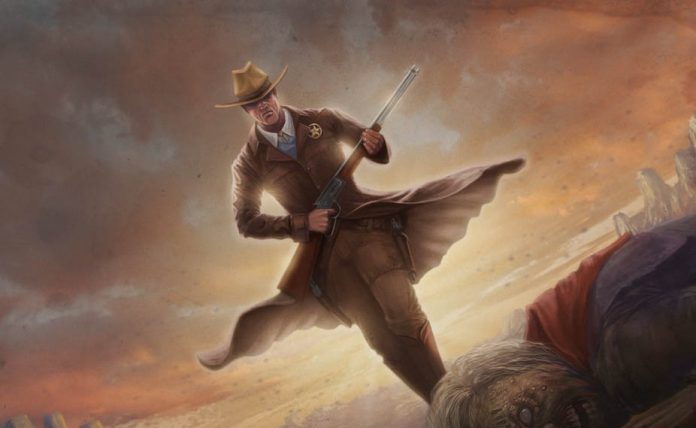 Philip Swinford blinked as the late afternoon sunlight reflected off the oak-dappled canyon. He strained futilely against the ropes that bound his hands in front of him.

Looking dead ahead, Philip saw a weather-grizzled bandit on horseback deliberately playing out a lariat. He thought of running, but the dozens of outlaws surrounding him promised to make any attempt futile. Philip saw a huge man deftly sharpening an Arkansas pigsticker, a swarthy bandolier-clad bandit oiling his six-shooter, and the girl he had seen around town. Gone now were her ill-fitting homespun blouses. Instead, she wore a vaquero hat, vest, shooting gloves, and denim trousers. A red bandana offset the black outfit and confirmed what Philip should have realized all along; she was a Sloaner.

The assembled gang chorused a full–throated yell as Sanford Taylor spurred his roan to a full gallop towards his target. There was an equal mix of cheers and groans as the toss grazed Swinford’s forehead, sending the deputy’s hat whirling into the dust.

“Hey, amigo, you call yourself a vaquero?” taunted Pancho Castillo. “Mi Madre lassos better than that!” Sanford scowled and hawked a glob of tobacco that landed at Pancho’s feet. Unfazed, Pancho said, “Aim that good with the rope, you’ll get ‘im for sure.”

Sanford scowled, throwing his lariat into a spin once again. Feeling the spurs, the horse reared slightly before commencing its run.

As the lariat encircled him, Philip Swinford instinctually reached his hands out to grip the rope before it tightened completely around him. Eyes closed and teeth gritted, he braced himself for the inevitable. He tumbled to the ground, wincing at the gravel that scraped him raw as he was dragged the length of the street and back.

Stopping in the middle of his compatriots, Sanford wheeled his horse around and let the roan’s brace maintain the rope’s tension. Arms folded across his chest, Taylor scowled at the rest of the gang. Cowed, the assembled bandits scattered their applause.

Amidst the hoots, claps, and hollers, Alice Stowe goaded, “Hey Sanford, spare the cactus and spoil the Dog.”

At this, Sanford exhorted the group, “Who thinks he needs some more?” As expected, the gang once more cheered its approval.

A one-two roar of gunshots ended this. Swinford watched as some of California’s most wanted outlaws stepped aside. Sloane emerged from the crowd with a measured swagger befitting the gang’s leader. Battered and coughing, Philip struggled to sit up. Sloane stopped above him and said, “Your people have Lawrence. Tell me where he is.”

“Blackwood, Lawrence Blackwood,” Milt Clemons replied. He kicked the deputy back to the ground before slowly propping his head up using the toe of his boot so he could get another look at the assembled outlaws. “Sure you don’t remember him? Lotta folks here’d love a crack at you.”

“Too bad Makaio ain’t here. His silver tongue could charm a coyote out of a mesquite thicket,” drawled John Perthein, the loner others called “The Fixer”.

“If Makaio was here, then he couldn’t be in Gomorra buyin’ time for us to spring him!” said José Morales.

Swinford interjected, “Ha! Dave’s been waiting too long to get his hands on a bandanna THAT red to let some shyster lawyer have his way.”

Sloane’s eyes narrowed to flinty slits as she considered Swinford’s retort. After a brief pause, her face tightened in secret revelation before whirling to face her gang and ordering, “Horses everyone! We ride hard for Gomorra!”

Sloane tersely replied through clenched teeth, “Swinford’s right. Blackwood’s gonna swing, sooner rather than later.” With that, Sloane mounted and wheeled her horse leading the frenzied posse up the trail towards Gomorra.

As the hoofbeats receded, Philip saw that the horseman who had dragged him, Sanford Taylor, had remained behind. He dropped to one knee before the deputy.

“I’m gonna make you a deal, boy … a trade, in fact,” said the gunman with a wicked grin. “Your badge for my bullet.”

Philip Swinford heard the hammer cock even as he saw the gloved hand reach down to rip his deputy star from his vest.