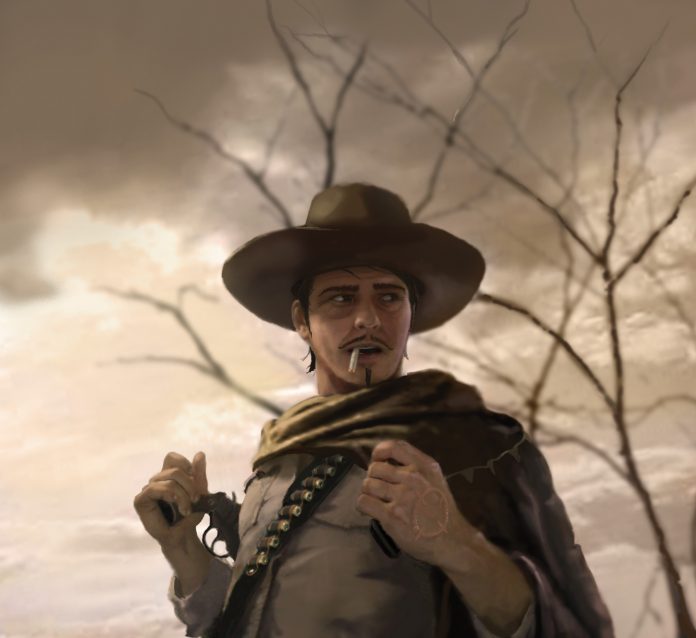 Mary inhaled sharply as she was pressed once more against the doorpost of the darkened general store. Pancho Castillo pulled back from the kiss to touch his forehead to hers, the two suppressing laughter at the noise as he brought a finger to his lips.

“We must be more quiet, Querida,” he whispered through the giggles. “We wouldn’t want to attract attention. You know the sheriff frowns upon such public displays.”

“I’m sure that preacher frowns on a lot of things,” Mary whispered back. “But I’m not interested in any of them right now.” She grabbed his face with both delicate hands, pulling his lips to hers once more. She released him again in a gasp before rising up on her toes to brush her lips against his ear. She whispered, “Can’t you find someplace where we don’t have to be so secretive?”

He smiled, pulse racing as he stared back at flushed cheeks framed by golden drop curls. “I know of just such a place.” He grabbed her hand as the two took off into the night, dodging drunken cowboys, semi-respectable businessmen, and other happy couples out for an evening stroll. They twisted through the crowds, stealing kisses in the shadows and weakly pretending innocence whenever their laughter attracted too much attention.

Finally, Pancho led her down a shadowy alley next to the Killer Bunnies Casino to a doorway nestled between a pair of deserted buildings. He reached into his pocket for the skeleton key to the gang’s in-town hideout, despite Mary’s best efforts to distract him. “At last, we can be truly alone, Querida,” Pancho said as he unlocked the door.

Instead of delight, Maria cringed. “Ugh, what is that smell?” she asked, covering her nose and mouth as best she could.

Pancho sniffed in an attempt to discern the answer to her question, but was forced to stop and cover his own nose at the unpleasant odor. “Querida,” he gagged, “I don’t know, but perhaps we should find someplace else for tonight.”

Mary gagged and coughed. “Pancho Castillo, if this is your idea of a joke, I’m not laughing.” The contents of her stomach wouldn’t be restrained any longer as she vomited up on her dress. Crying in embarrassment, she hitched up her soiled dress and ran back towards the center of town.

As soon as Mary vanished from sight, Pancho no longer had to put on a brave front. Like his departed paramour, he doubled over and vomited near the wall before slumping down against the doorway. True, the hideout hadn’t been used since the debate, but it was one of Sloane’s safe spots in town. It was clean, and definitely did not smell like this. He stood and steadied himself, pulling a red bandanna from his pocket and tying it over his face as a shield against the smell.

As he reached for the handle, a metallic glint caught his eye. Wires. Horrified, Pancho cautiously peered closer at the crack beneath the door, realizing that the wires led under the doorway and into the hideout. He quickly withdrew his hand and stepped back. “Dios mio,” he said. “This place is rigged to blow! But who … or why?”

Whoever had strung the wires had only made a half-hearted attempt to conceal their presence with odd bits of debris. Pancho looked past the hideout, confirming that the wires trailed beyond the adjoining alley. He stood, looked again at the door, and thought better of investigating the possible dangers within. Instead, he turned and followed the wires until they disappeared under the dirt pathway.

On a hunch, Pancho crossed the path, resuming his search on the other side. It took a few moments, but his diligence paid off as he once again found the wires, this time emerging several yards further up the path from where they disappeared. Only now, whoever had laid the wires no longer made any attempts at concealment. The road was deserted, and Pancho stood lost in thought. Looking downward once more, he noticed that the wires stretched across an open field. He continued following the wires.

Glancing up to check his bearings, Pancho noticed that the wires now paralleled the Whateley Manor. Could the Mayor be behind this? But Essex said Nicodemus is some kind of a warlock, so why would he use such rudimentary means to destroy something? It didn’t matter. Instead, the wires led past the Whateley house and continued towards a place that Pancho knew well … the Fourth Ring Circus.