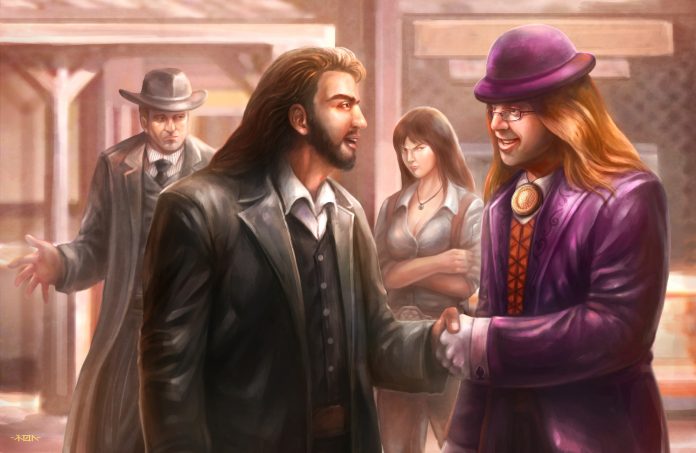 “Forgive me. Can’t remember the last time I was in a church, let alone confessed anything. Somethin’s weighin’ on me, though. Whole passel o’ folks is dead … and I helped.”

“I’m sorry, Sheriff, but there is nothing to be done. I was hired to put a man in the mayor’s office of Gomorra; I am doing just that. After recent events and the murder of both candidates, with the sheriff not ten feet away, no one else was willing to take the job,” Rafi said.

“Are you suggesting I’m to blame?” Dave’s cool was breaking.

“Well if the sheriff cannot protect even the candidates, it doesn’t inspire a great deal of confidence in others who might consider the position.”

“Well find someone else — ANYONE else — ‘cause that shameless, murderin’ snake is not going to be mayor of my town!” Dave’s voice rose to a shout.

“T’wasn’t supposed to go down like that. It was supposed ta be clean. Two shots, that’s all. But after tha first one, that sheriff was up and firin’ at our sniper. Next thing I knew, bullets were everywhere. When that nice, old woman — tha one from the Telegraph Office — pulled her gun on me … I just reacted.” The confession broke down into sobs.

“You do that! You tell the marshal I will not let that man be mayor! Not here! Not anywhere!” Dave’s yelling had inadvertently summoned Wendy to the room.

“Sheriff, I’m not here to argue with you. He will be sworn in within the hour. I am simply paying you a courtesy by inviting you to witness. He is our new mayor. He is the only one willing to take the job.” Rafi said, answering Dave’s outrage with a calm demeanor.

“What’s going on, Dave? We got a new mayor?” Wendy asked.

“It ain’t that I never killed a man before, Rev. … but that was in war. Before the ceasefire, I had prolly killed twenty or more. This weren’t no war. This was a slaughter that ended up killin’ all sorts o’ innocent folk, and I was a part of it.”

“I’m with Dave. You don’t know this man like we do, Rafi,” Wendy stated pointedly. He’ll put on all sorts of faces to folks on the street, but that man’s evil, just like his kin. The whole lot of ‘em tried to bury this town more than once, and now you want to just hand him the keys to the kingdom?! There ain’t no way he signed up for this without some self-serving motive,” Wendy said.

“Just like all men who choose to be in politics,” Rafi smiled. “Miss Cheng, I understand that there was some call for you to be sheriff, but you declined, stating that after all that had happened, you didn’t want the responsibility. I’m certain that you would have done just fine, but you didn’t want the job.

“Mr. Whateley wishes to be in charge, and Gomorra needs a man who will lead, not just meander. If you have a better appointee, then I will reconsider. But I’ve already exhausted the list of suggestions from the townsfolk; there are no other willing, viable candidates. He has no warrants and is not under suspicion for any crime. Whatever wrongdoing you accuse him of, there is no record, no evidence, and no confessions. He will be mayor.”

“And if he brings about the destruction of this town again?” Dave lamented. “What then?”

“I will be staying around, Sheriff. I will act as your liaison until I have shown you that his intentions are pure and he will not be the herald of this Gomorra’s armageddon.” Rafi spoke with a slightly apologetic tone, “Dave, I know you don’t care much for myself or the marshal, but we have no other options. If I don’t name any victor before tomorrow, I will have failed at my assignment, and Nicodemus Whateley is the only man willing to take the job.”

“I never meant for it ta happen, Rev. It wasn’t –” sobbing interrupted the man’s words. “That woman didn’t even fire a shot, and I killed ‘er. I didn’t even realize I’d done it. I took that innocent woman’s life, fer what? Ta further some plan of Essex’s? Fer some payout?

“No payout is worth what we did.”

“After the recent tragic events, it became necessary to select a mayor apart from a formal election. With the power I hold from the independent Commonwealth of California and the United States of America, I reviewed the options and have selected the candidate I feel will do the best job of leading this growing city. Congratulations to new Mayor of Gomorra, Nicodemus Whateley.”

Rafi introduced the mayor, who stepped up next to the olive skinned man. Judge Harry Somerset rose from his chair nearby and approached the pair who were shaking hands before a crowd ushering an uncertain and fleeting applause.

Judge Somerset looked at the young man’s eyes through his tinted spectacles before beginning. “Please raise your right hand and place your left here.” He presented a black-bound book with the words “Holy Bible” embossed across its cover. The mayor-elect sneered slightly before placing his gloved hand across its face. Both men raised their hands as the judge continued, ”Repeat after me: ‘I, Nicodemus Whateley . . .”

Nicodemus grinned like a mischievous child, “I, Nicodemus Whateley . . .”

“What must I do for forgiveness, Reverend?”

“The Lord forgives all those who are repentant, my son. Though the Lord also says that those who trespass against the laws of man must answer for them.”

The door to the confessional swung wide open and Lawrence Blackwood found himself face to face with the barrel of a shotgun, the grey-haired pastor standing at the other end.

“. . . that I will faithfully and impartially discharge and perform . . .” Nicodemus repeated.

“ . . . all the duties incumbent upon me . . .” Judge Somerset continued to read, as Nicodemus faithfully repeated. “ . . . as Mayor of the city of Gomorra, California, according to the best of my ability, and my understanding, so help me God.”

“ … so help me God.” Nicodemus finished, trailing off slightly with the final word.

“Dave!” The sheriff spun to the hushed but insistent voice behind him. He saw Lucy, flushed and catching her breath.

“What’s got you all worked up, girl?” Dave asked.

As Dave handcuffed Lawrence Blackwood, Reverend Inbody spoke to the man. “God loves you, son. Never believe otherwise. He led you to this church so that you could find forgiveness, both by God and man. I believe you are truly repentant, and God will not hold this sin against you. However, I assume the law of man will not be so merciful, nor should it be. I pray we meet again and join together in prayer in the Kingdom of Heaven.”

“So he confessed to taking part in the fight at the hustings?” Dave confirmed with the Reverend.

“Yes, he confessed to murdering Miss Applegate from the Telegraph Office.”

Lawrence hung his head ashamed. “Yeah. I did it.” Inbody gently gripped the man’s shoulder.

Dave looked a little saddened. Finally, he had a Sloaner to make an example of, but it was one who was actually sorry for being one. It was a bittersweet victory, at best.

“By the way, Lawrence,” Reverend Inbody approached the cuffed man. “I wanted to let you know, Baptists don’t use confessionals.”

As Dave led him out of the church, Lawrence hung his head slightly, and looked back at the Reverend with tears in his eyes, “I know.”