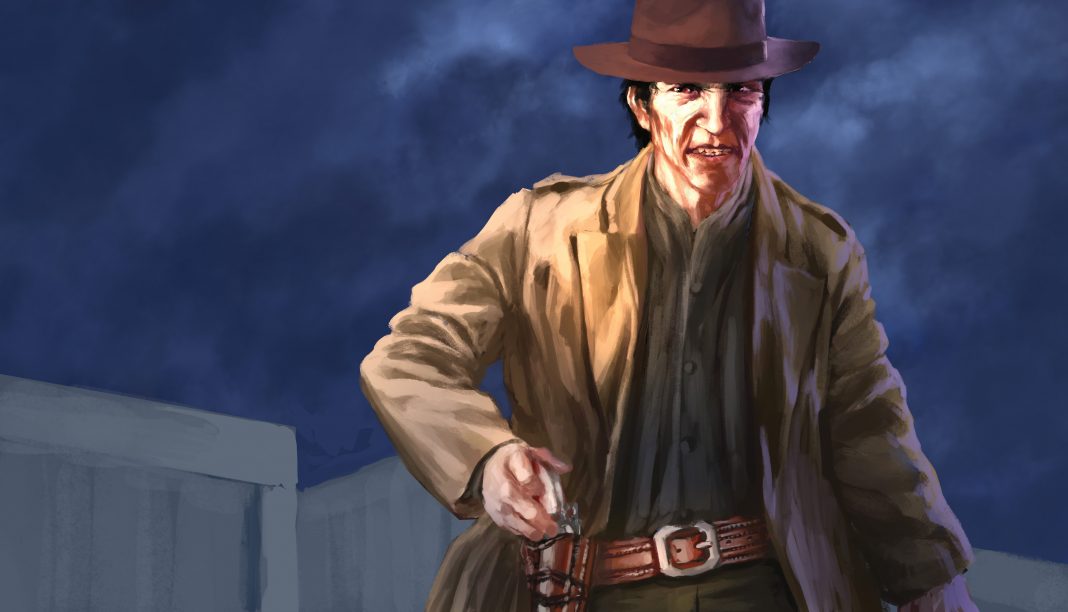 There was an eerie quiet that held sway over the town below. The smoke from the explosions was still rising, the dust still settling, but silence more or less reigned in Gomorra. Jonah Essex stood on a rocky outcrop overlooking the town, and tried to ignore the unease in his belly. No matter what happened in town that night, for him it was nothing but disappointment.

Jonah turned back to his little camp and took a seat. His old horse was grazing lazily, and on the ground next to him, the burden.

It didn’t look like much now, just a bundle of leather lying in the dust. It wasn’t right to see it like that, stripped of its place, its glory. But such deals with darkness demanded that things get a bit dirty. Jonah laughed in spite of himself and remembered what he’d come up here to do.

“I guess we’re all dealing with devils today eh mate?” Jonah asked his horse, who continued to chew peacefully. He settled himself to the ground, tugging the dog eared deck of playing cards from his jacket and shuffling them absently. He watched the echoes of smoke trail into the sky across the desert.

“Bet them indians’ll think there’s a right good party going on with a signal like that.” Jonah smirked at his own joke and started dealing himself a game. His horse shuffled her hooves and gave a nervous neigh.

The horse gave a whinny, eyes rolling wildly in their sockets, panicked.

“What the hell,” Jonah coughed, and he managed to get his pistol into his hand as the shadow fell over him.

Mario Crane stood over Jonah, his gaunt frame blotting out the sun.

Jonah cocked the pistol, the sound echoing lightly across the rocks. “Crane.” He whispered up the sallow faced man who stared down at him.

“Essex.” Crane’s pistol was in his hand, cocked and ready. They stared at each other.

“By all rights I shoulda shot you down already, Essex. Lying, murderous piece of dirt.”

“Doesn’t sound like you, though, does it?” Jonah gave a toothy grin. “Shooting people in the back is for folk like me, innit?”

Crane slowly lowered his pistol, slipping it soundlessly into his holster. “Cut the talk, Jonah. Why’d you bring me up here?”

Jonah hesitantly uncocked the hammer with a shaky thumb and flipped his pistol back into his holster. With a nod, he made a gesture towards the smoking ruin that was Gomorra far below. “There’s our town, Crane.”

“Who made it out alive?” Mario asked, stepping forward near to Jonah. The proximity of the man made Jonah’s skin prickle in anticipation.

“Too early to tell. Lot of dead though … circus took the town for a fine old show.”

“Where is she?” Crane asked, looking off towards the town, his eyes narrowed.

“Dunno. Still down there somewhere. Made things her problem and ain’t been seen since. I did find that though.” Jonah nodded to the burden, lying silently beside him.

“What is it, really?” Mario asked.

“I don’t have a clue, Crane. Like anything in this town, it ain’t what it seems though. It’s power. It’s the right to lead. It’s guns that go like the Devil himself picked up a couple shooters. You seen it.”

“I sure have.” Mario nodded. He raised a hand to his chest, on reflex.

Mario Crane stared down at the holster, and spoke without looking up. “You call me up here to do me a favor? You got a crummy sense of humor Essex, don’t doubt it.”

Jonah spread his arms wide. “Look, it may be hell on Earth, but I like this town. All the smoke and soot in the air reminds me of London. And it’s ours, mate, make no mistake. The wreckage down there belongs to the gang now, seein’ as there ain’t much left to stop us. I’m gonna hang about to claim it. We just need a leader.”

Mario worked his jaw, a placeholder reaction for a man who no longer drew breath, before spitting on the ground between them.

Jonah shrugged and kept going. “Every leader of the gang has worn it. Comes with bestin’ the best. It takes real guts.”

“I want nothing to do with you, Jonah. I’m not a part of your little gang. You’re killers and thieves, the lot of you. And you’re lucky as hell I didn’t kill you weeks ago. Contact me again and I can’t promise the same luck’ll hold.” Mario turned to leave. “If Sloane’s really gone, then I’ll give you the same warning I gave her. Leave Gomorra and keep a low profile … because if I hear the name again, I’ll end the person answering to it.”

“Wait!” Jonah snatched up the holster and ran to face Mario again. Jonah lifted it slowly to him, with reverence. “I meant it, Crane. It’s a true prize, worthy of the man who got the drop on Sloane.” Mario extended a hand for the holster, but Jonah pulled it back. “But it comes with a deal, though, don’t it?”

“I wouldn’t dream of it. You’re the one that stood up to her; so you should be the one to take it. You want an end to the thievery, the killings? You got it. I’ll back you up to the others, and they’ll fall in line. You give the orders. You’ll be in control. You got the power to make it happen … the power of Sloane.”

Jonah gave a low shrug, a gesture of simplicity, almost an apology. “You got to use it to kill her. Get your revenge, and take her gang. She’s got to go, Crane.” Jonah swept his arm towards the town. “Look what happened without you … without us. We pick up the pieces, and you can steer Gomorra any direction you like.”

Mario stared down at the belt in Jonah’s hand, then back up into the Brit’s eyes. Jonah raised an eyebrow. “So are you in, or do I have to find another dead man?”

After a moment, Mario inclined his head in the slightest nod, and held out his hand for the holster. “So what do I do? How does it work?”

“This isn’t the west end; no song and dance needed. It’s just a holster, mate. Put it on.”

Jonah relinquished the item to Mario’s waiting hand. It felt like nothing at first, just a simple holster. He caressed the dark leather, running his fingers across the black stitching. No carvings, no detail, no glimmer or flash of magic.

“What’re you waiting for mate? Try it on for size. See how it fits.” Jonah said, taking a step back from Crane.

Mario took the holster in both hands and fastened it about his hips. He exhaled. That’s when the sensation came. There was something there, deep within him. Something tangible that he could feel as soon as the leather was tightened about him. The reassuring weight of the empty holster hanging at his hip seem to give him an awareness he’d never experienced before. Mario’s mouth cracked in an uncharacteristic grin. He quickly became aware of it and banished it from his face.

Jonah looked on in silence, smiling.

Mario could hear that sniggering voice in the back of his head, the same one that haunted his dreams whenever his mind reached for sleep, and knew it was time to silence it for good. “Enough,” he whispered. But the voice grew louder. The sneering, laughing croon of the manitou that haunted Mario Crane began echoing in his head, loud enough it hurt. Mario’s face once again twisted into a grin, a horrible rictus leer that tore at the edges his mouth. “Enough!” Mario coughed through his own teeth, unable to control his hands as they twisted and jerked at his sides, caressing the leather of the holster.

The voice in Mario’s head had become a roaring beast, reaching a shattering crescendo. He felt himself falling away, felt his own senses being crushed. His vision began to blur, his ears blocked with laughter, and the scratches of claws tore at the fabric of his own mind.

Jonah staggered back another step, watching the undoing of Mario Crane with rapt attention.

The thing that wore Crane like a suit jerked its neck to face Jonah so hard and fast he heard bones grind. It was still grinning that awful smile as it opened Crane’s mouth to speak in a grating mockery of the dead man’s voice. “Thank you, Jonah. Fits like a glove.”