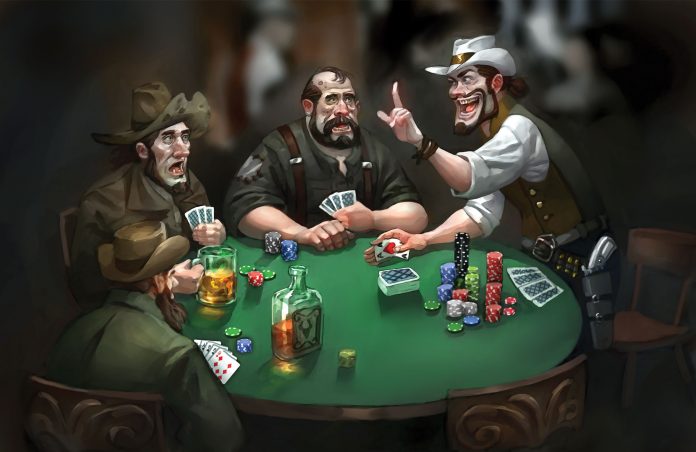 Rico’s hands flashed the cards across the table so quick they were a blur, and then slapped one of his powerful hands down on the table loud enough to make everyone jump.

“And that was when I realized that I might be in some real trouble.” Rico continued the story that had taken four hands to build, loud enough to grab the whole saloon’s attention. He pointed a finger into Charlie’s face and flipped over the first of his dealer cards.

“Now I knew being lost in the Maze was bad enough, but now that I’d lost my horse, I knew I was in for a time of it. Lady Luck, that fickle mistress, was scowling down on me, let me tell you.”

Grant and Morley glanced down at their cards briefly, before Rico’s arms spread wide, as if to encompass the whole room, and gave a hoot.

“That’s when I saw it! Maze Dragon … biggest one I ever seen. Coming right at me outta the blue.”

The dealer’s cards came up, and with a flourish, Rico was tugging in winnings from all three players at the table.

“Bad luck gentlemen. You know what they say, ‘Next time lucky.’ How about another round? Now where was I?”

Grant looked down at his swiftly dwindling pile of chips and opened his mouth to speak, when Rico tossed him another hand and a winning smile.

“That’s right! It was all thanks to the information I’d found when I was exploring the old Knot Mine that gave me the advantage I needed to outwit that big overgrown skink, and so it was that I developed a cunning plan that would lead me safely out of his clutches, and get me the gold after all.”

“Wait, where did the gold come from again?” Charlie said, looking up from his cards, failing to keep up with the story and focus on his hand at the same time. Rico waved the question away with a flourish of deft hands and dealt out the last card.

“Whole ‘nother story; we’ll come around to that later, don’t you worry yer pretty little head about it. So anyway, the dragon bears down on me, and I can feel his breath right on my face, he’s so close.”

Glancing across the cards on the table, Rico clapped his hands together and gave a deep sigh.

“Well gentlemen looks like the fickle mistress is on my side tonight, don’t it?” He leaned forward to scoop up his opponents’ last surviving chips.

“Wai– … wait. What happened with the dragon?” Morley asked, missing the flush he could have had with the right discard.

Rico looked up, a wide smile on his face.

“Then allow me to continue, of course. Everybody loves a good story. In the meantime, shall we say, double or nuthin’?”