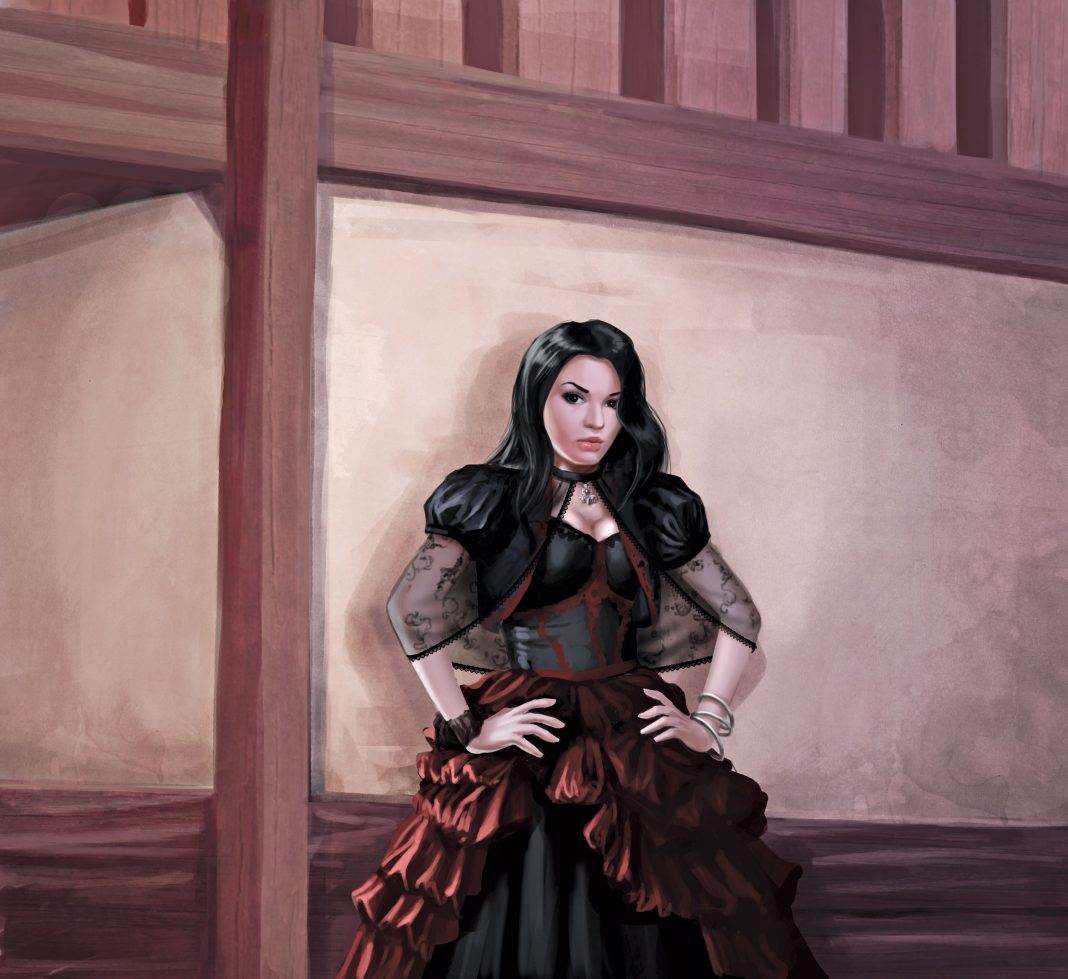 Ivor Hawley strode through the new Morgan Mining Company building. On each side of him, surveyors and engineers huddled over maps and blueprints. Kevin, his diminutive assistant, hobbled forward to knock on the door of Lula Morgan’s private office.

Kevin opened the door. Lula’s office had been decorated with a large painting of a red rose, purple drapes, and plush chairs with multi-colored weaved cushions. She sat behind a desk of finely carved mahogany. The office looked more like a fancy hotel lobby than a place to conduct business. Ivor removed his top hat, twisting it to his side in a fluid motion. He prepared to greet her with his typical energetic flair when he heard a click.

To his left, Lane Healey leaned against the wall with a cocked pistol. He didn’t point the gun at Ivor, but the implication was clear. Kevin scampered between them, as if his compressed frame could stop the bullet if it came to that.

“Is he necessary?” Ivor asked Lula. “I merely came to commend you on your recent success and inquire about procuring some trivial items from you.”

“I’m sure you’re well intentioned, Ringmaster, but I’ve lived in Gomorra long enough not to trust anyone. Mr. Healey helps with that,” Lula said, her hands folded over her desk, the shoulders of her dress nearly puffed up to her ears. “So save the act and let’s cut to the chase. What exactly is it you’re looking for?”

Ivor whimsically flicked his wrist. “As I said, trivial items … pickaxes, carts, nothing of value. There’s also the small matter of an abandoned property on the North End. It’s in shambles and not worth a considerable amount. Our people began to clean it out, until I discovered that the Morgans held the deed. I have a grand vision for its use: a sanitorium to house the sick and give this town some much needed relief.”

Lula considered him with vacant eyes, a pitiful attempt at appearing like she understood the finer points of negotiations. She nodded. “I believe we can come to an arrangement. Might we talk privately?”

“Kevin,” Ivor said, motioning his cane back toward the door. “Kindly take a walk please.”

Lula’s gaze shifted away from Ivor and toward her muscle. “Lane, some privacy?” She batted her eyelashes. “Show the little man around the office.”

Lane grunted an assent and pushed himself from the wall with his boot. “C’mon,” he said, making his way out the door. Kevin followed along behind him.

Ivor waited until the voices diminished and he could no longer hear their companions. “Theatrical. I am a captive audience awaiting the grand reveal. Tell me, Miss Morgan, what is it you seek?” Ivor brandished a wicked smile back at Lula.

Lula’s eyes narrowed, seriousness encroaching over her face. “Lillian. I want her gone.” She took a deep breath and let it out again to quell some silent inner fury before continuing. “This company is rightfully mine, and Lillian is in the way of claiming it. I want it, and I want it now.”

“Ahh, I see,” Ivor said. He paced back and forth in front of Lula’s desk, cane clicking as he feigned consideration of the notion, building anticipation as he would any show. “We at the Fourth Ring hold much sway in Gomorra, more than most realize. I have some ‘creative’ business practices I can exercise which would ensure your division thrives and hers falters. Oh, and this just might help as well!” Though fully intentional, Ivor patted his vest as if it were an afterthought. He reached into his pocket and lifted a handkerchief into the air. “This,” he said, pausing for effect and employing his showman’s voice, “will serve to amaze and dazzle, propelling you to the top of the Morgan empire as surely as my acrobats fly forth from the cannon!”

“Not just any handkerchief, my dear,” Ivor said. He set it on the corner of her desk. “But one guaranteed to cripple Lillian Morgan. One touch and she will be forced to hand this company over to you.”

He could almost hear Lula’s heart race with excitement. He’d struck the perfect chord. Her eyes lit up as they met his. “Yes, yes. I think we could have a deal.” Her brow furrowed as she considered. “But all this for a worthless property and some rusty equipment? Why?”

“Favors, my dear Lula. Favors make the world go round.”