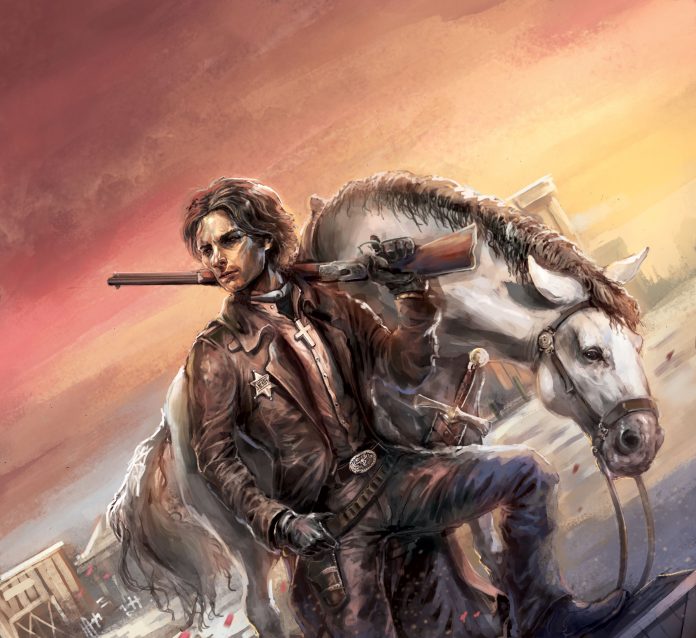 Abram Grothe paced Dave’s cramped sheriff’s office. Well, it’s my office now, he thought. He stopped and stared at the cluttered piles of wanted posters, briefs from Judge Somerset, and last week’s newspaper. Abram wanted to tidy up, if only to toss the papers into the fire and start anew.

“Sheriff,” the tin star proclaimed. Abram wore it as reluctantly as he wore his sword. Like Nate Hunter and Dave Montreal, he was another deputy caught up in the noble pursuit to serve the law in Gomorra. Only Sheriff Coleman had been a professional lawman who wanted the job. In the end, all they got for their troubles was a long dirt nap, and for Coleman, the rest was short-lived.

Somewhere beyond the town square, gunfire rang through the streets as Sloane’s gang staged yet another daylight raid on Gomorra’s hapless merchants. Between the call and response of pistols, a buffalo rifle thundered.

Abram grabbed his sword and jail keys and raced outside. He paused to listen. It came from the other side of town. A brisk run brought him to the town square simultaneous with Mortimer Parsons’ and Wendy Cheng’s arrival.

“We were too late, Sheriff. Darn Sloaners. Nearly every other day brings another hold up,” said an out-of-breath Wendy, followed by Mortimer.

“This time they raided a shipment out of Shan Fan. Dude’s ok, but they got the cash box and lit a shuck back to Soddum ‘fore Yi and I could chase ‘em down,” said Mortimer. “Abram, we need a posse to corral Sloane once and for all.”

“We don’t have anything close to a posse,” Abram replied. “Most recruits don’t have the guts to stand up to a gunfight. Andrew Burton is the only one to last more than a week. Most of the rest can’t even get out of bed, they’re so sick. This pestilence is affecting us just as much as the rest of the town.” Who knew that Gomorra would have to face so many threats at once? What would you have me do, Lord? Run to battle like your soldier, Joshua, or tend to the sick?

Dejected, the trio made their slow way back to Abram’s office.

Before Abram could get settled again, the office doors swung open. Lucy Clover and Emanuel Ashbel nearly collided full force trying to fit through. Both spoke at once.

“Sheriff, we must do something, about this sickness –” interjected the doctor.

He was interrupted by another pair of newcomers. However, this time councilman Ebenezer Springfield waited to allow Tommy Harden, who was visibly ill, a wide berth.

“Yeah, Lucy ‘n I can –” said Tommy, gagging. He quickly turned to vomit into a nearby spittoon.

“See what I mean?” said Ashbel.

“The town council demands that action be taken regarding this horrific plague!” Springfield demanded.

“Exactly what I have been trying to tell Sheriff Grothe,” Ashbel said loudly enough to at last get Abram’s attention.

“All right, Doctor. Speak your peace. How bad is it?” Abram asked.

“Very bad, indeed. Remember two weeks ago, that outbreak of typhoid fever?” Glum nods affirmed Emanuel’s timeframe. “I expected a stomach bloat and diarrhea along with increased fever,” the doctor continued. “However much to my surprise, the patients exhibited scaly rashes and feverish hallucinations. We have tried to restrain them once they turn violent, but some have even attacked their caretakers and loved ones before wandering off, never to be seen again. Whatever this is, it is not Typhoid. In fact, it’s not any disease that I’ve ever seen or read about. Until I know what it is, I’m afraid that there is little I can do.”

“But what did you do for them?” asked Wendy, who cast a nervous glance at Tommy Harden.

“Salves and ointments for the itching and medicated compresses to ease the fevers. Sometimes it works, mostly it does not. I spend every day walking from one end of town to the other, making house calls. By the time I reach one part of town, I receive word of another case where I just came from. Gomorra is simply not capable of handling an outbreak of this magnitude. There are so many sick, so many …” Emanuel slumped down with a resigned shrug.

“Excuse me. Is Sheriff Grothe there?” came a wheezing teakettle of a voice. A diminutive man in tails and a top hat jostled his way through the crowd. Reaching Abram, Kevin Wainwright proffered a calling card. “Ringmaster Hawley wishes to have a word with you, good sir.”

“Back here, Mr. Hawley,” Abram’s shouted voice carried past Kevin and into the bar in front of his office. “Come in.”

The assemblage parted to allow Ivor Hawley a clear path.

“My dear sheriff,” Ivor said in a booming voice. “Once again, congratulations on your new post. Gomorra is indeed a town under great distress currently. Not only are you short-handed for deputies, but I’m afraid this plague is consuming all of the patrons for my incredible, spectacular, and amazing Fourth Ring circus. I ask, what is an entertainer without an audience to entertain?” A pouting frown spread beneath his curled mustache. “Which is why I have decided to help rid Gomorra of this terrible disease. Sir, the Fourth Ring is at your service,” he ended with a sweeping bow.

“‘A merry heart doeth good like a medicine,’ but I’m afraid our needs are too great for clowns to undo this time,” said Abram.

“Ah, yes.” Ivor held up a thin white-gloved finger in protest. “But even a humble circus has resources. We are citizens just like you. And as citizens, it is our duty to help the community fight this scourge,” said Ivor, punctuating the last words with a stern military cadence. “We have set up one of our spare tents as an infirmary. Come one, come all, come see what we have for you.”

Ivor’s long strides and Kevin’s pigeon-toed rolling gait led the group down Main Street and through the town square. A red and white striped tent stood in front of the troupe’s usual big top. What it lacked in placards and promotions, the tent made up for with open flaps, welcoming all comers. Already, Dulf Zug was ushering in a few of the visibly sick from the day’s performance.

As the ringmaster approached the tent, the Brute brought forth a massive stool used to support the largest of beasts. Once in place, Ivor nimbly stepped up, indicated the tent with his cane, and addressed the group. “Ladies and gentlemen, boys and girls, children of all ages, welcome to the Fourth Ring’s infirmary and triage. Here the ill and diseased will find rest and safe haven from the ravages of this vile pestilence.”

“People are sick and dying, and this guy thinks it’s showtime at the circus,” Lucy whispered to Wendy.

Emanuel rushed to the front and shook Ivor’s hand with repeated vigorous pumps. “This is exactly what we need to manage and quarantine this plague. How can we ever repay you for this?”

“Think nothing of it, Doctor,” Ivor said with a dismissive gesture. “My troupe rejoices in any opportunity to help. Please allow me to show you what we have built so far. No doubt you will be able to make improvements.”

With this, Emanuel gaped in awe. Could salvation from the disease really lie within those striped canvas walls?

The doctor turned to Abram and the others. “For now, I will set up my practice here. Tommy, let us take care of you first,” he said as he motioned the deputy to accompany him into the tent.

As the pair entered, they paused to adjust to the dim light. Even Emanuel’s camphor-soaked handkerchief could not diminish the enveloping putridness.

“Ringmaster,” a man still in clown silks groaned as he reached for Ivor.

Despite the dim light, Ashbel observed the pus-encrusted scabs of the infirm clown’s skin. “Beyond hope of any remedies that I may offer,” Emanuel said. He frowned and cast his eyes low.

“Leon’s artistry has brought a level of joy and wonderment to our clown’s performances previously unheard of on this side of the Atlantic. You see, Dr. Ashbel, all of our tricks and illusions fare naught against the terror of this dreaded contagion.”

Makeshift as this infirmary is, it will have to do. Emanuel looked Ivor in the eye as he addressed him, “You are most kind, and I am forever grateful for you and your Circus’ aid. I accept your offer and will do my best to remedy the affliction that plagues these poor souls.”

“Excellent! There is no doubt in my mind that you will succeed!”

Ashbel had already turned away and headed towards the first of his many newfound patients, failing to notice Ivor’s toothy grin behind him.